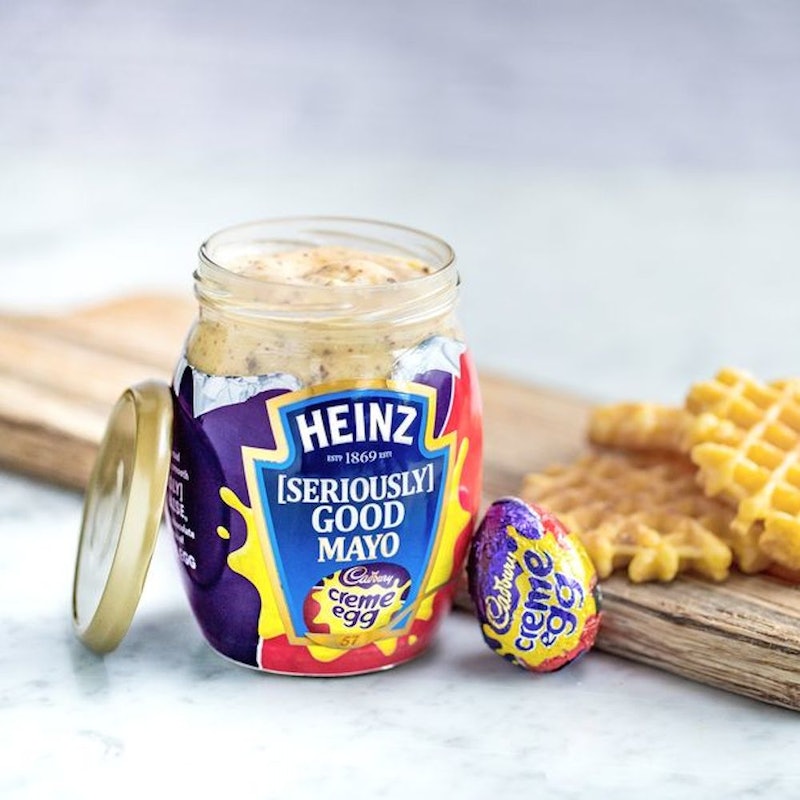 Let me preface this by saying, this is not an April Fools' joke. It sounds like one, but it's not. Here goes: Cadbury Creme Egg mayonnaise exists — for real — as part of a collaboration between the chocolate brand and Heinz. Lest you think this is a situation where plain Creme Egg filling in a jar is being called "mayonnaise" because it looks like it... nope. It's actual mayonnaise that tastes like a Creme Egg. Bon appétit!

As reported by Metro, Heinz [Seriously] Good Cadbury Creme Egg Mayo will be very limited edition and will be featured later this month at a Heinz x Cadbury Creme Egg pop-up in London. The publication points out that Heinz was inspired by its chocolate mayonnaise "announcement" last year, which actually was an April Fools' joke. At that time a Heinz spokesperson said, according to The Independent, "It’s hard to improve on perfection, but we think we might have done it. Mayonnaise? Seriously good! Chocolate? Really good! Chocolate Mayonnaise? Scrumptious perfection!" The company suggested using it in cake recipes, and the logic on that point — that cakes contain oil and eggs, anyway — was the most convincing part.

But now, the brand has actually gone through with it — just with a Cadbury Creme Egg twist. According to Metro, the new condiment combines Heinz mayo with Cadbury Creme Egg filling, crème pâtissière, and pieces of Cadbury Creme Egg chocolate shell. Heinz says the the mayo could be used on waffles or crumpets.

In Heinz’s 150th anniversary year, we want to take every opportunity to celebrate and Easter has always been one of our favourite times of the year. So we set out to create the most Easter-y mayo we could. And who better to partner with than Cadbury Creme Egg — the kings and queens of Easter and another of the nation’s most loved brands!

We’re excited to finally announce our partnership with Heinz to create this gloriously gooey, crazy combination and dream collaboration for so many Cadbury Creme Egg lovers. We couldn’t think of a better partner to make this spread. The surprising taste is so, so delicious!

While the Cadbury Creme Egg mayonnaise is real, it's clear that announcing it on April Fools' Day isn't a coincidence. The brand knows that people will be like "What? Huh? That can't be real!" And, this time, they can go, "Well, yes, actually, it is."

It's just not real in the sense that you'll be spotting it on grocery store shelves. That is, unless the outcome of the Heinz x Cadbury pop-up tasting goes surprisingly well.