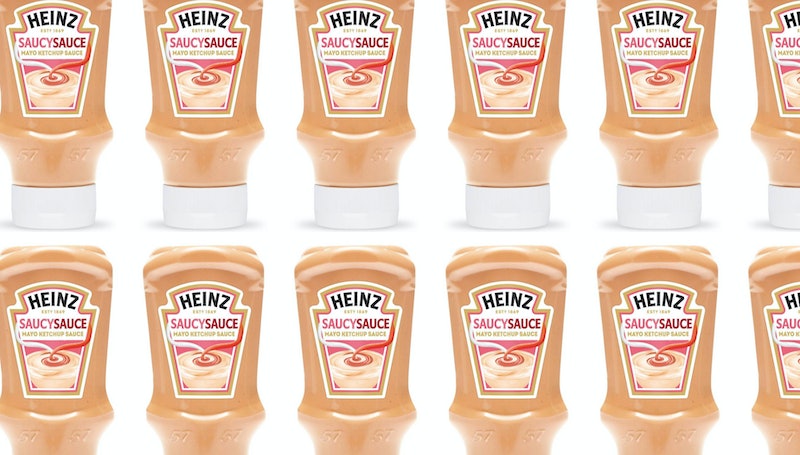 Anybody who's anybody knows the importance of practicing safe eating. By using condiments. And, guys, with so many options out there, it's easy to end up with a ridiculous sauce:food ratio in your fridge. Which might seem dumb but, in actual fact, condiments make anything delicious. You have your mayo lovers who put lashings of the creamy condiment all over everything. And of course your ketchup fans who can't cope with the thought of a red-sauce-less meal. But what about those in between? Who like a mixture of the two? Well Heinz has launched Mayo-Chup and I'll be damned. They done made a sauce hybrid that may well take over the globe.

The sauce is the perfect blend of mayo and ketchup and is made for dunking chips in. Or, like, anything. Just dunk anything in there. The combination of Heinz Ketchup and Heinz Seriously Good Mayonnaise is everything your hungry little heart dreamed of. Yes, technically you might just want to have the two condiments and mix them together but that's far too boring. Especially when you have the chance to have a two-fer and get all of that deliciousness into one handy squeezey bottle. Perfection.

So, according to Pretty 52, the sauce giant initially announced that it would be bringing Mayo-Chup to the UK supermarket aisles after a successful run of the stuff in the U.S. However, once it crossed the pond it had a name change. So instead of the mixed up sauce having a mixed up name, it's now known as Heinz Saucy Sauce. I know right? Saucy AF.

The Sun reports that the sauce has been such a rip roaring success that the food brand has gone on to make some other sauce hybrids that they have released in the U.S. The mix ups are a mustard and mayo sauce called "Mayo-Must." And a mixture of barbecue sauce and mayo called, you guessed it, "Mayo-Cue."

The brand, which is celebrating its 150th birthday this year, is not afraid of taking on a few unusual risks. For example, in celebration of the big birthday, they only went and made a pretty curious product — ketchup caviar. The product was available on Valentine's day so true lovers (of ketchup) would have the chance to get their posh ketchup on. As their website explained:

"Heinz has launched an exclusive version of the Heinz Tomato Ketchup we all know and love, in new delicious caviar pearls that burst in your mouth, helping to elevate any meal into a delicious fine dining experience. And what’s more, Ketchup Caviar is so exclusive that there are only 150 jars available in the UK — especially for only the ultimate ketchup star-crossed lovers."

The product was available in Fortnum & Mason and, guys, it turns out that Heinz has a bit of a history with the posh food shop. According to the Fortnum & Mason website, Henry Heinz chose their department store as one of his first ports of call when he was trying to peddle his wonderful wears. And the rest, or so they say, is history.

You can pop into Fortnum & Mason and pick up some exclusively labelled items including the iconic ketchup, the best baked beans, and of course their yummy tomato soup.