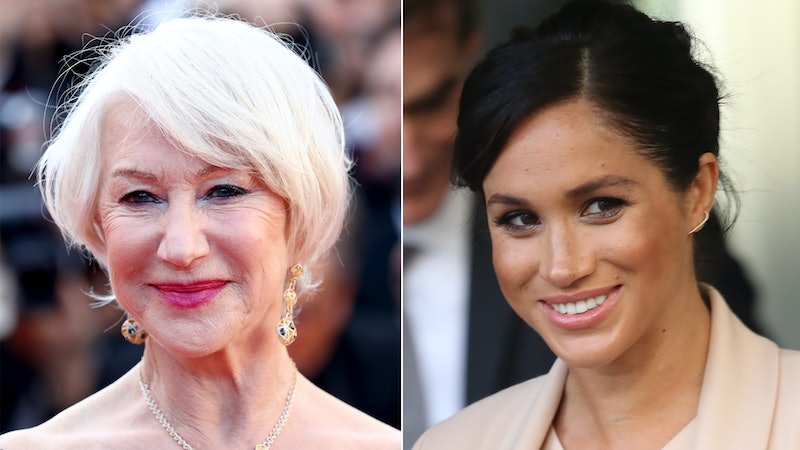 If there's one woman that I strive to be like on a daily basis, it's Helen Mirren — especially when it comes to empowering other women. And it turns out that she and I have a shared sense of adoring for a certain Duchess of Sussex. During a recent interview, Helen Mirren's comments about Meghan Markle revealed the admiration that the actress feels for the new princess when it comes to elegance and poise she has shown since entering the royal family.

On Thursday morning (Jan. 31), Mirren made an appearance on Good Morning Britain to talk about the launch of the Prince's Trust Mentor of the Year award, as she is an ambassador for the charity. While there, Mirren also spoke of her admiration for the Duchess of Sussex and the way in which she has cemented herself as a strong member of the royal family, the Daily Mail reports. Speaking to presenters Susanna Reid and Ben Shepard, Mirren said:

"I think right from the moment that their relationship was revealed she conducted herself with incredible self-restraint elegance, discipline, and simplicity and humanity," Mirren said. "I was an admirer... it's an incredibly life to lead, talk about pressure. I think she is doing it with great elegance."

The actress expressed similar sentiments last year during an interview with Entertainment Tonight ahead of the royal wedding: "I think she's been utterly gracious and elegant," Mirren said. "I don't mean elegant in her clothes — of course she's elegant there, too. But elegant as a person."

I totally agree with Mirren, especially considering the pressure Markle must have felt when she became engaged to Prince Harry. I mean, it's daunting enough being introduced to your partner's nearest and dearest at the best of times, let alone when it involves joining the royal family. And becoming a member of the royals means adapting to new roles, which is yet another aspect that Markle has taken in her stride.

But Mirren didn't just discuss her admiration of Markle, she also spoke about Prince Charles, and shared her thoughts on the Prince's Trust.

"It's a wonderful programme. The Prince's Trust, right from when it was first conceived by Prince Charles, was obviously specifically to help young people entering into their future life, into the workplace, to help them set up businesses, to become self-sufficient. And, of course, a big part of that is mentoring. I think the Prince's Trust have been wonderful in not just encouraging young people but encouraging young people to become mentors, and that's very much what this award is about."

Mirren is also passionate about highlighting the issues that young people face today, including the "incredible pressure" of social media. As Mirren explained on Good Morning Britain, social media offers young people an idealised version of world that real life can never match up to, and this can lead to serious consequences. Mentoring such as that at the Prince's Trust, therefore, is integral in helping young people to understand and take on the real world.

Just when I thought I couldn't love Helen Mirren more than already did.