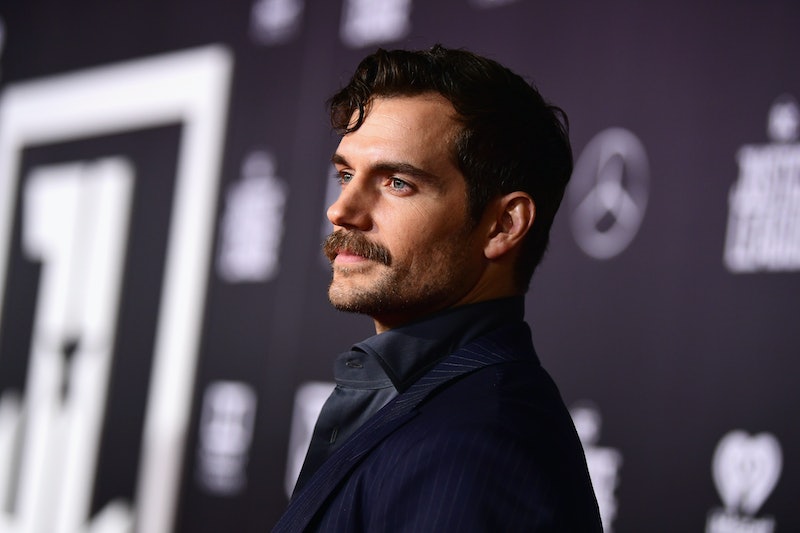 Henry Cavill was forced to clarify his thoughts on the #MeToo movement after many on Twitter called him out following an interview the actor did with GQ Australia. In the interview, Henry Cavill's comments about dating in the age of #MeToo seemed to imply that following the spotlight on the #MeToo movement, simply talking to a woman could result in being labeled a "rapist."

As many on Twitter pointed out, the implication that women are conflating harmless flirting with rape is dangerous, not to mention very misguided. In a statement issued to Bustle, Cavill admitted that his comments might have seemed "insensitive" and apologized for "any confusion and misunderstanding."

The actor's rep provided the following statement to Bustle on Thursday:

"Having seen the reaction to an article in particular about my feelings on dating and the #metoo movement, I just wanted to apologize for any confusion and misunderstanding that this may have created. Insensitivity was absolutely not my intention. In light of this I would just like to clarify and confirm to all that I have always and will continue to hold women in the highest of regard, no matter the type of relationship whether it be friendship, professional, or a significant other. Never would I intend to disrespect in any way, shape or form. This experience has taught me a valuable lesson as to the context and the nuance of editorial liberties. I look forward to clarifying my position in the future towards a subject that it so vitally important and in which I wholeheartedly support."

During the final moments of his GQ Australia interview, Cavill was asked what he learned from #MeToo. He said he'd "been fortunate enough to not be around the kind of people who behave that way. To my memory there’s been no moments where I look back and think, ‘Ooh, OK, maybe someone shouldn’t have gone through that.’" Cavill admitted, however, that he had seen people he'd worked with "being perhaps overfamiliar with some of the actresses. But, I’ve always walked up to them and said, ‘Hey, are you all right? That’s creepy'.”

When asked whether the #MeToo movement had led him to take a closer look at his own behavior, he told the magazine: “I like to think that I’ve never been like that." He then added that "if someone casts too harsh a light on anything, you could be like, ‘Well, OK, yeah, when you say it like that, maybe.' But it’s such a delicate and careful thing to say because there’s flirting which, for example, in a social environment is in context — and is acceptable."

Cavill noted that things do need to change, but not everything. He told GQ, “It’s important to also retain the good things, which were a quality of the past, and get rid of the bad things." For example, he said that he thinks that "a woman should be wooed and chased," but felt it was "very difficult to do that if there are certain rules in place."

"Because then it’s like: ‘Well, I don’t want to go up and talk to her, because I’m going to be called a rapist or something’. So you’re like, ‘Forget it, I’m going to call an ex-girlfriend instead, and then just go back to a relationship, which never really worked’. But it’s way safer than casting myself into the fires of hell, because I’m someone in the public eye, and if I go and flirt with someone, then who knows what’s going to happen? Now? Now you really can’t pursue someone further than, ‘No’. It’s like, ‘OK, cool’. But then there’s the, ‘Oh why’d you give up?’ And it’s like, ‘Well, because I didn’t want to go to jail?’”

It was this comment implying that flirting could lead to allegations of rape that critics on Twitter questioned. "No one’s going to call you a rapist for saying, ‘Hello,’ to a woman," journalist @NiecyOKeefe tweeted. "They will only call you a rapist if you rape them. Hope this clears up any remaining confusion."

The Good Place star Jameela Jamil agreed, tweeting, "If you don’t want to be called a rapist, then when you approach a woman... just don’t rape her." While journalist Donna Dickens tweeted, "Good. Henry Cavill *SHOULDN'T* date until he figures out how to do it without 'accidentally' raping someone."

To some on Twitter, Cavill's comments on why dating during #MeToo is difficult seemed like excuses for men's bad behavior. "The mental gymnastics some men are doing to position themselves as 'victims' of #MeToo is insane," @HelenRPrice tweeted.

It's not the first time this notion that #MeToo is making dating more difficult has come up, and it likely won't be the last. But it's important for everyone, including Cavill, to remember that the #MeToo movement isn't looking to put an end to flirting, it's looking to start a conversation about consent. If anything Cavill's comments show it's a dialogue that men and women need to be having to make dating better and, more importantly, safer for everyone.