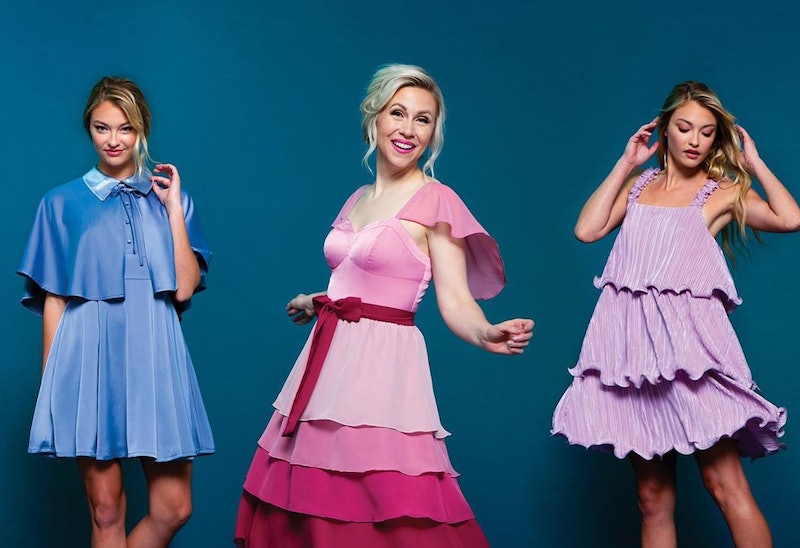 You can now bring Harry Potter to your formal events thanks to Her Universe's Yule Ball collection (offered in sizes XS to 3X and 10 to 28.) The Yule Ball took place in Harry Potter and the Goblet of Fire, and was the wizarding world's version of prom. Sorcerers and witches came to the formal event wearing their most elegant robes, leaving their standard black cloaks behind. Her Universe decided to bring the magic of the Yule Ball into the Muggle world with its formal robe collection, but re-imagined the cloaks into pretty cocktail dresses.

Granger's Yule Ball dress in the movie was a pink satin number with ribbons and ruffles. The dress had sheer ruffle cap sleeves, a 1930's inspired bias cut, and tiers of pink ombre ruffles going down the skirt. The Her Universe dress reworks the original gown by transforming it into a knee length frock complete with a satin-feel bodice, flutter sleeves, and adjustable ribbon belt. The dress also has ombre ruffles, but they span the whole skirt rather than just appearing on the sides. The midi closely follows the color scheme of Granger's original dress, showcasing fuchsia, peach, pale pink, and nude hues.

There is also a plus size version available for a $10 price difference.

Delacour's dress is a little bit different. Delacour is from Beauxbatons Academy of Magic, France's wizarding school. At the Yule Ball, Delacour wore a mauve column dress with a vine of gilded leaves running across her neckline and up the strap of one of her arms. Rather than recreating the witch's formal gown, Her Universe decided to recreate Delacour's school uniform.

Her Universe's Delacour dress mimics that design closely, and is complete with the shrunken cape and silver foil peter pan collar. The cape is also detachable, in case your occasion doesn't call for it.

There is also a plus size version that goes up to a size 28.

Lovegood's dress is modeled after the frock that the witch wore to Professor Slughorn's exclusive Christmas party. Lovegood went as Potter's date, and she arrived to the event wearing a pink, heavily ruffled dress. The dress was comprised of three ruffle tiers, was made from a metallic pink fabric, and was a mini length.

The Her Universe version is decidedly more casual, but just as magical. The dress is made from a heat-crinkled stretch material in order to mimic the foil texture of the original. The ruffled tiers have curled hems just like Lovegood's dress, but to a lesser degree. There is also silver lurex embroidery on the tiered layers to mirror the sparkle and glimmer of Lovegood's mini.

The plus size version is exactly the same, but goes up to a size 5.

If you want to add a little bit of sorcery to your wardrobe, you can't go wrong with this dress collection.

More like this
Kylie Jenner Wore A Stunning Corset Dress For Paris Couture Week
By Dominique Norman
'Love Island' Tanyel's Latex Versace Dress Was Gifted By A Former Islander
By El Hunt
Kylie Jenner Rocked A Very Kim Kardashian-Esque Outfit At Couture Week
By Allie Fasanella
Jennifer Lopez Wore A Naked Dress To The Shotgun Wedding Premiere
By Dominique Norman
Get Even More From Bustle — Sign Up For The Newsletter
From hair trends to relationship advice, our daily newsletter has everything you need to sound like a person who’s on TikTok, even if you aren’t.