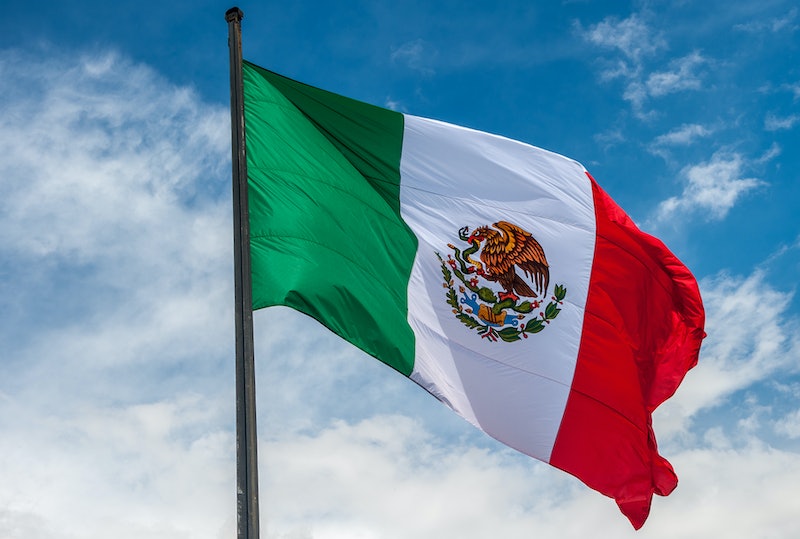 Shutterstock
By Melanie Mignucci
May 4, 2018

By now, it’s more or less understood that Cinco de Mayo isn't celebrated in Mexico the same way it is in the states. In Puebla, the central Mexican state between Mexico City and Veracruz, the day is widely celebrated as the anniversary of the Battle of Puebla, where the outnumbered Mexican army defeated invading French forces on May 5, 1862. But Cinco de Mayo as you likely know it in the U.S. — with its two-for-one margarita specials and its rampant cultural appropriation — is a celebration with historical ties to Chicanx activism that’s been co-opted by marketers looking to capitalize on Latinx spending power, under the ostensive guise of celebrating Mexican heritage.

Growing up in northern Mexico, Nabila Sedano, 24, never observed Cinco de Mayo with her family. “I really don’t have any feelings towards this ‘holiday’,” she tells Bustle. “Now that I’m older and I live in New York, it’s more of an excuse to go out and have drinks with my friends.”

Bonnie Casillas, 24, says she has also observed Cinco de Mayo as an adult, but recognizes how its celebrations can be problematic. “I went to a predominately white university in California, where my white peers pulled out the sombreros and serapes, and we all day-drank by the beach, shouting random Spanish words. Looking back, it was classic ignorant, privileged behavior on everyone's behalf, myself included,” she tells Bustle. “It was everything about getting wasted and nothing about the culture tied to it.”

“Cinco de Mayo has become a day where my beautiful, vibrant Mexican culture depreciates to a day for Americans to gorge themselves on alcohol and food,” Ruby de Santiago, 30, tells Bustle. “Often times, we are presented as taco-eating cartoon characters with big sombreros and mustaches. We are so much more than that.”

“Celebrating Cinco de Mayo should be about celebrating Mexican-American/Chicano culture. It is not about getting wasted and acting like idiots,” Monica* says.

Sedano wishes more people knew about the origins of the day. “It should at least be known more for its history than [as] a day to drink.”

And that history often gets obscured, even for those who know about its origins as the anniversary of the battle of Puebla (which, no, is not the same as Mexican Independence Day). For Mexicans in what’s now the United States, the battle also came to symbolize Mexico’s opposition to the Confederate army during the Civil War, which France had hoped to support after successfully invading Mexico. Chicanx activists in the 1960s and ‘70s leaned into the anti-imperial sentiment represented by Puebla as a rallying cry of sorts for Mexican-American pride — beginning the tradition of celebrating the holiday in the states. But, as Carlos Harrison writing for HuffPost notes, these celebrations needed sponsors, and liquor companies stepped up. Hence, the association with drinking that carries through to this day.

“I was surprised to find out this holiday is rooted in the Chicano movement,” says de Santiago. “I would love to see it go back to its Chicano roots — then people would know that it became a significant holiday in my people's struggle for civil rights in the 1970’s.”

Casillas grew up steeped in Chicanx culture, three blocks from one of the high schools that initiated the East LA Walkouts. But she personally thinks that arguing over Cinco de Mayo is less important than dealing with the political issues facing Mexican and other Latinx folks in the states. “While I would love to educate people about Cinco de Mayo and how it's an example of the conquered rising up against the conquerors, I think educating people on the issues that affect the Latinx community and gaining their support for those causes, like our DREAMers now, is much more important,” she says.

“I want non-Mexicans who celebrate Cinco de Mayo to enjoy it, and hopefully become more aware of what this date actually means to Mexicans and Mexican Americans,” says de Santiago. “It's especially important in our current political climate to acknowledge Latinx culture, not just Cinco de Mayo. I firmly believe that the people who oppose Mexican immigrants, [who] want to build a wall, should not celebrate this holiday.”

"I love celebrating my rich culture with my friends, even if they know not to say ‘Happy Cinco de Mayo’ to me."

So, what can you do if you’re looking to observe the holiday in a respectful way? “Understand what Cinco de Mayo is about,” says Monica. “Respect Chicano, Mexican, and Mexican American cultures. They're all different. Do not play on stereotypes, and most of all, don't act like spring break idiots.”

“Be respectful of the places you visit and the people you interact with,” says de Santiago. “Learn more about our culture, ask questions. I love celebrating my rich culture with my friends, even if they know not to say ‘Happy Cinco de Mayo’ to me.”

Casillas suggests people take it as an opportunity to support the community that’s made the holiday possible. “I would ask that they also make a donation to United We Dream or to support a local organization that helps immigrants or low-income communities,” she says. “If they are comfortable with wearing a sombrero and taking tequila shots in honor of a Mexican holiday, they should be comfortable with supporting a community that is constantly fighting for their existence in this country.“

More like this
22 Movies On Netflix That Are Perfect For The Whole Family
By Bustle Editors
Charlene White & MPs Lead Tributes For Bristol Bus Boycott Organiser Roy Hackett
By Sam Ramsden
Here’s Your Daily Horoscope For August 8, 2022
By Mecca Woods
15 Genius Storage Solutions For Your Next Bathroom Refresh
By Emma Garza
Get Even More From Bustle — Sign Up For The Newsletter