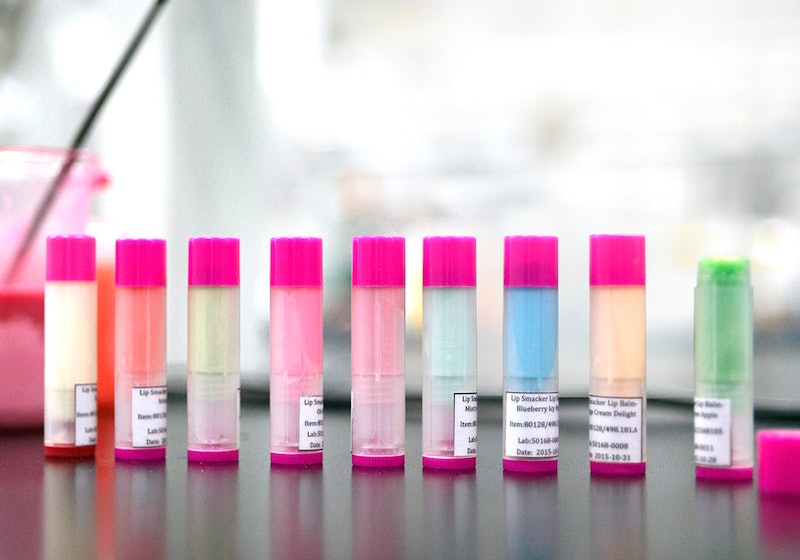 "'Oh my gosh, your office smells so good! How do you not get hungry?'" is often the first thing people say when they meet with Maritza Aispuro, Product Development Manager at Markwins International, she tells me. As the person who heads up flavor development for Lip Smackers, a large part of Aispuro's day consists of sniffing donut-scented essential oils and licking vanilla-flavored balm off her lips, with the scents sometimes seeping through the glass walls of her workspace into the cubicles nearby. She keeps candy on hand to soothe her coworker's cravings.

In the world of nostalgic beauty products, there is arguably none more universally loved than the classic Lip Smacker. With just enough color to be considered makeup (which upped your middle school cred) and just enough moisturizing ingredients to be considered a lip balm (which upped the chances of getting your parents to let you buy them) Smackers truly were a winning combination for '90s teens.

Users' passionate ties to the brand are only strengthened by the fact that the company was wildly successful in accurately replicating flavors and scents, like Dr. Pepper and cotton candy, with incredible accuracy. Psychology Today reports that familiar smells can trigger more powerful memories than visual stimuli, which could explain why a whiff of Watermelon Lip Smacker instantly brings you back to getting ready for a middle school dance in your best friend's bedroom.

According to the Lip Smackers website, they became the first brand to launch scented lip balm back in 1972 when they released their strawberry flavor. But even in the '90s and early '00s, when when most competitors were sticking mainly to red fruit flavors, Lip Smacker stood out with their Dr. Pepper, Moon Rock Candy, Butterscotch Topaz, Birthday Cake, and other more adventurous scents. And they didn't smell like "Dr. Pepper mixed with some weird plastic or chemical" — they smelled like pure Dr. Pepper, the soda.

But while Lip Smackers is often considered a beloved brand from the past, especially for millennials, they actually continue to roll out new balm flavors every season. In January 2015, Markwins International acquired Bonne Bell and Lip Smacker from Aspire Brands, the same month Aispuro started sniffing her way through all those essential oils to create brand new Lip Smacker scents. The process is very elaborate. "I’m probably smelling and tasting and testing flavors a good three days out of the week, every week," Aispuro says. "So it’s a lot of flavor, it’s a lot of formulas. We have tons of flavors, like over 400, that we make available."

Turning familiar food and beverage flavors into a safe-to-use lip balm isn't just a matter of pouring some coffee into a blender with a little shea butter. "Our team utilizes equipment such as gas chromatographs and mass spectrometers to isolate some of the ingredients found in the drinks to give an indication of the materials that may be present," Aispuro explains, speaking specifically about Dr. Pepper's familiar 23 flavors. Aispuro's background is in more general beauty industry marketing — though she did take a course in fragrance before starting this job. That class gave her "a background on the nose and on what the top layer, middle layer, base layer of notes are."

It's not a simple task, and not every treat has a corresponding essential oil, which is why a lot of other brands stick to those tried and true fruits. "The most difficult part in formulating scent that replicates an edible fragrance is that ingredients do not exist to create every food experience," Aispuro tells me. "For example: Strawberry Shortcake is comprised of the smell of real strawberries, whipped cream, and fresh baked pound cake. There is no such thing as strawberry oil…so when a Scent Specialist is tasked with creating a Strawberry Shortcake scent they use their vast knowledge of aroma ingredients, what each smells like, and how they smell blended together, to recreate that same sensory experience." Most scent specialists have a background in chemistry, so they know "which flavors can and can't go into a lip balm format," Aispuro explains.

All that is to say: Aispuro is eating and smelling a lot of lip balm to make sure the final product comes out just right. She'll submit a product development request to the brand's flavor partners (which is where the chemists who know exactly which flavors are safe for your lips work) who will then send back three versions of the scent to test. Once Aispuro is happy with the way the oils smell, she'll blend them with the base Lip Smacker formula. "That way we’re not just smelling the flavor out of a glass tube, but we’re actually putting it on our lips, we’re actually, like, licking to taste it."

When I ask Aispuro if consuming all the lip balm and smelling all those oils ever makes her feel a little queasy, she laughs. "I mean, I lick it. I don’t technically eat it," she says. It might technically be safe to take a bite out of a lip balm, but that's not something Aispuro practices on the reg. "Again, having a bunch of candy around helps quell any urge to munch on a Smacker," she says.

Her nose often needs more rest than her stomach. "Sometimes I will get like, 'Well my nose needs a break because now I can’t tell the difference between vanilla or like mango,' like they smell the same. Which, you know, they shouldn’t," she explains. Aispuro also keeps coffee beans at her desk to reset her palette, ensuring your vanilla frappe Lip Smacker doesn't hit the shelves as a mango frappe due to any fatigued sniffers.

Aside from the coffee bean breaks, there are other roadblocks Aispuro and her team has run into. Lip Smacker's tagline is "Best Flavor Forever," she tells me, which means they'll only put scents as authentic as that infamous Dr. Pepper to market. And there is one trendy flavor you might be disappointed to hear likely won't ever make its way to the lip balm aisle: avocado.

In 2016, Lip Smacker added Horchata and Sriracha to the brand's Wacky Flavor collection, two flavors Aispuro cites as some of the most fun to create. During that testing period, they also tried to make a guacamole balm. Speaking about the process, Aispuro says that the final scent defintiely smelled like "something green with a little cilantro," but that they ultimately couldn't really get the smell of avocado. A rep from the Research and Development Facility for Lip Smackers explains that the distinct sensation you get from eating avocado comes more from its buttery texture than any real flavor, which made it difficult to replicate, even with their library of over 1500 materials.

Plus, any flavor that's made into a lip balm needs to be stable at a high temperature, so it can withstand being heated during the pouring process. "Avocado is a very mild flavor and would be heat sensitive so it would be technically difficult to achieve and keep stable in a lip balm," the rep explains. Clearly, they've put a lot of thought into this.

As for now, Aispuro is already prepping the yummy flavors Lip Smackers will launch for Holiday 2017. While she won't give me any hints about what to expect, she assures me it'll all taste exactly like the real thing.