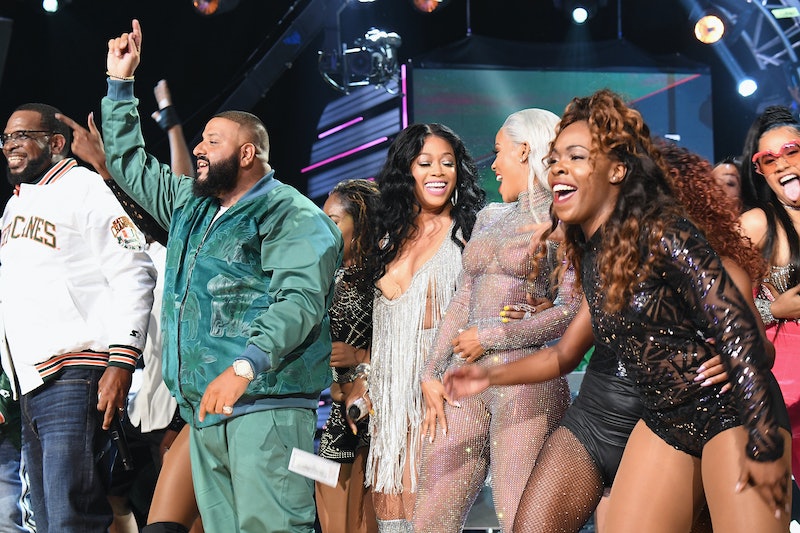 This year marks the 18th annual Black Entertainment Television Awards, which celebrate personalities in the spheres of music, TV, movies, sports, and more. The 2018 BET Awards will air Sunday, June 24, from the Microsoft Theater in Los Angeles, and the event promises to be packed with can't-miss performances. So ahead of the ceremony, here's how to stream the BET Awards on Sunday night.

Host Jamie Foxx is calling this year's big event Blackanda (get it, like Wakanda?), because he is definitely milking the popularity of Black Panther for all its worth. In a promotional video for the awards, Foxx adopted the persona of T'Challa and described the ceremony as "a place that only opens its borders once every summer" — a place "where DJ Khaled is surely to say 'Another one!'"

This will be Foxx's second time hosting the BET Awards, per Billboard. "You know this is the greatest year to do it!" he told Billboard. "I mean Cardi B’s success, DJ Khaled’s success, Kendrick Lamar’s success, Kevin Hart’s success…and Black Panther. It’s like the mantra is, 'I’m not here to host. I’m here to celebrate so hopefully if all comes together, it’ll just be one big party.'”

Audiences who don't want to miss the party will definitely want to tune in on Sunday night. In addition to airing on BET, MTV, VH1, and TV Land, fans can watch through the BET NOW app on a smart TV, which will ask for a log-in from a cable provider. Another option? Watch live on BET.com. Fans will be asked to sign in with their cable provider there as well, but a one-time 24-hour viewing pass could help those without a cable subscription.

Even if you can't get access to the awards show itself, audiences can still watch the red carpet show, which will be hosted by personality Amanda Booz and rapper Safaree Samuels. The carpet will kick off at 6 p.m. ET and can be viewed over on BET.com.

And if all else fails, fans can follow along with the ceremony on Twitter with the #BETAwards hashtag. After all, where else are you going to get instant commentary on everything that happens throughout the ceremony?

In 2017, the BET Awards were hosted by Saturday Night Live's Leslie Jones, and performances included Mary J. Blige and A$AP Rocky with "Love Yourself," and Kendrick Lamar and Future doing "Mask Off." Both Xscape and New Edition reunited for special performances, the latter of which received a Lifetime Achievement Award.

As for the 2018 awards, this past year in black excellence was dominated in part by Black Panther and Kendrick Lamar, who produced original songs for the Marvel film's stellar soundtrack. Lamar is unsurprisingly up for several awards this year, including Best Album (DAMN. and the Black Panther soundtrack), Best Collaboration ("LOYALTY." feat. Rihanna), Best Male Hip-Hop Artist, Video of the Year ("HUMBLE."), and Coca-Cola Viewers' Choice (also for "HUMBLE.").

In terms of Black Panther, a good chunk of its actors have been nominated, including Letitia Wright (Best Actress), Lupita Nyong'o (Best Actress), Angela Bassett (Best Actress), Chadwick Boseman (Best Actor), and Michael B. Jordan (Best Actor). What's more, the superhero film is also up for the Best Movie award, alongside Mudbound, Detroit, A Wrinkle in Time, and Girls Trip. Also up for music awards are SZA, Cardi B (how could anyone forget Invasion of Privacy?), DJ Khaled, Jay-Z, Beyoncé, Rihanna, Drake, and more.

Per BET, the presenters this year will include Mike Colter (Luke Cage), Chloe x Halle, and Kevin Hart, among others. R&B singer Anita Baker is also slated to receive a Lifetime Achievement Award for her work in the music industry. As for the performances, they are set to include Nicki Minaj, Meek Mill, Miguel, 2 Chainz, Migos, and Janelle Monáe. While there's no word on what songs these musicians will be performing, Monáe will likely do a song or two from Dirty Computer, while Minaj has had several singles recently, including "Chun-Li" and "Bed" feat. Ariana Grande.

All in all, the BET Awards promise to be a great time. Blackanda forever!