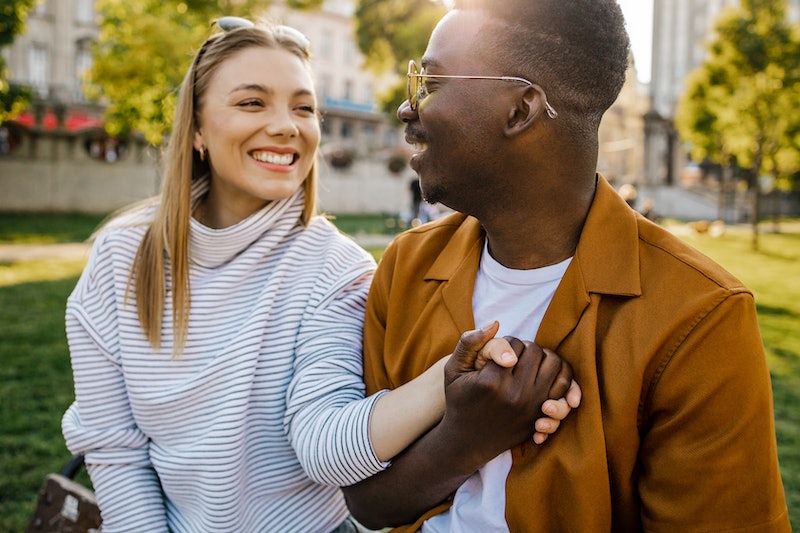 This year marks five decades years since Loving v. Virginia, the U.S. Supreme Court case which ruled bans on interracial marriage unconstitutional. A recent report from Pew Research Center shows some eye opening statistics on how ideas about interracial marriage have changed in that time, from the number of people marrying outside their race to the number of people who approve of it.

There’s a good chance this all feels a little far removed to you, the idea that it would be illegal for people of different races to marry. But 50 years really wasn’t that long ago. You probably have a dozen different people in your life who were alive during a time when marrying outside your race wasn’t legally allowed in most states. These types of laws, also known as anti-miscegenation laws, went beyond simply not recognizing unions between two people of different races; interracial marriage was a crime, often a felony punishable with jail time. While many originated in colonial times, these were modern laws that prohibited interracial relationships.

It’s hard not to see the parallels between interracial marriage and gay marriage in terms of legalization and public opinion. While current support of marriage equality is at an all-time high, you likely have mustard in your fridge that’s older than legalized gay marriage. In the same way that legalizing same-sex marriage didn’t end homophobia, there are still some ideas about interracial marriage that persist, despite them seeming as archaic as the ban that brought them on to begin with.

The number of people marrying outside their race is growing overall. Seventeen percent of all newlyweds in the U.S. married someone of a different race or ethnicity, based on information from the most recent census in 2015. In 1967, the year of Loving v. Virginia, only interracial marriages made up only three percent of newlywed couples.

Those statistics vary fairly significant depending on race. Newlyweds who are Asian and Hispanic are far more likely to marry someone of a different race. Almost three in ten Asian newlyweds married outside their race. Almost the same proportion of Hispanics newlyweds (27 percent) were one part of an interracial couple.

White people are the least likely to marry outside their race. Only 11 percent of white newlyweds in 2015 married someone who wasn’t white.

There’s A Significant Gender Disparity In Some Interracial Marriages

Almost one in four recently married black men (24 percent) marries someone who isn’t black, making them twice as likely to marry outside their race than black women (12 percent).

These play into larger questions about sexual racism, a form of racial discrimination found in people’s sexual “preferences.” To be clear: saying you “don’t date black women” or “you don’t find Asian guys attractive” is racist. It’s rooted in racist ideas of beauty as well as gender roles, and it prescribes traits to people based solely on the color of their skin. That’s racism, y’all.

Thirty-nine percent of Americans say marrying someone of a different race is good for society. That number was only 24 percent in 2010. Currently, the majority of people think interracial marriage “doesn’t make much of a difference” in society, at 52 percent. However, almost one in ten (nine percent) say that it’s “bad for society.” That number has dropped from 13 percent in 2010, but not by much.

Republicans are significantly less likely than Democrats to agree with that, with only 28 percent saying it’s “good for society” compared to 49 percent of people who lean Democratic. Sixty percent of Republican-leaning people say it “doesn’t make much of a difference,” and 12 percent say interracial marriage is bad.

Young people are more likely than older people to think it’s good for society. Additionally, almost one in five newlyweds in their 30s (18 percent) married someone of a different race.

Where Do We Go From Here

Overall, people are still far more likely to marry someone who is the same race as them, with 83 percent of newlyweds who are not in an interracial marriage. This isn’t to say that the 83 percent of people who married within their race are racist; that’s absurd. However, it is significant when you look at who has been deemed sexually appealing in media, who has been ignored and discriminated against throughout history, and who has not.

Looking at how far we’ve come in 50 years can in turn show us how far we still need to go when it comes to ideas about race, gender, and sexuality. In 2065, when we look back at Obergefell v. Hodges, the U.S. Supreme Court case which ruled bans on gay marriage unconstitutional, what do we want to see? Where do we need to grow? In looking back as well as ahead, we can see how we can start to change right now.