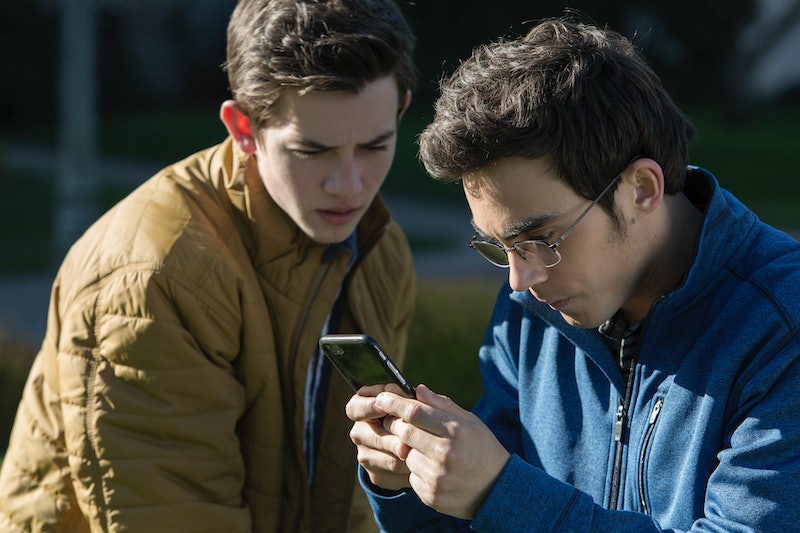 Dylan Maxwell may have moved on in American Vandal Season 2, but the teens that documented immature pranks with loft and grace in Season 1 are back. Peter Maldonado and Sam Eckland return as filmmakers taking on a new case, but one Season 1 character is back in a "blink and you miss it" cameo that's actually kind of perfect. Ming Zhang is in American Vandal Season 2 as an Easter Egg, and was technically there the whole time, but you'll have to wait until the very final episode before he shows his face.

You may have noticed "Additional Photography by Ming Zhang" in the opening credits of the Netflix series. Peter and Sam are on camera together a lot, which means that somebody has to be filming them! The credits also list a reenactment unit, a producing credit for a teacher seen and credited in the first season, and a second camera person named Christian Bennett. Christian is not a character in Season 1, and not seen during Season 2.

Ming, however, is a fan favorite from Season 1. While he was considered one of the nicest kids in Peter and Sam's school, Hanover High, he was the only one of the "Morning Show 9" with no alibi for when the penis drawing took place. However, Peter and Sam's documentary noted that Ming is beloved by everyone at school. Such a nice kid with zero enemies had no motive.

The Canadian exchange student also took a memorable turn at the infamous Nana's party. In the background of the party videos, he is documented as getting progressively (and impressively, for such a small person) more drunk. That said, Netflix audiences still considered Ming a suspect — there's even an extensive Reddit fan theory making the case for Ming Zhang being perpetrator.

Hopefully, those same amateur detectives spotted Ming in the Season 2 finale as the second cameraman. At around 05:14 in Season 2, Episode 8 "The Dump," Ming can be spotted holding a camera as the students evacuate. Here's the proof:

Season 1 shouted out Randall Snyder as the cameraman, a character and another one of the "Morning Show 9." Seems like Ming also got to take a trip to Bellevue, Washington for the new investigation at St. Bernadine's. Since American Vandal Season 2 doesn't take place at Hanover High, and since it isn't being "released" online during its own investigation, the meta aspects that permeated Season 1 are few and far between. So it's cool to see Ming pop back in, even for a second. The fact that he's in the background is a nice, subtle callback to his "arc" at Nana's party.

If American Vandal returns for Season 3, hopefully more connections and cameos will arise. At the end of Season 2, the identity of the Turd Burglar is uncovered — but Peter and Sam never really discovered who drew the dicks at their own school. Even if the series continues as an anthology, returning characters (looking at you, Christa Carlyle) are always welcome.