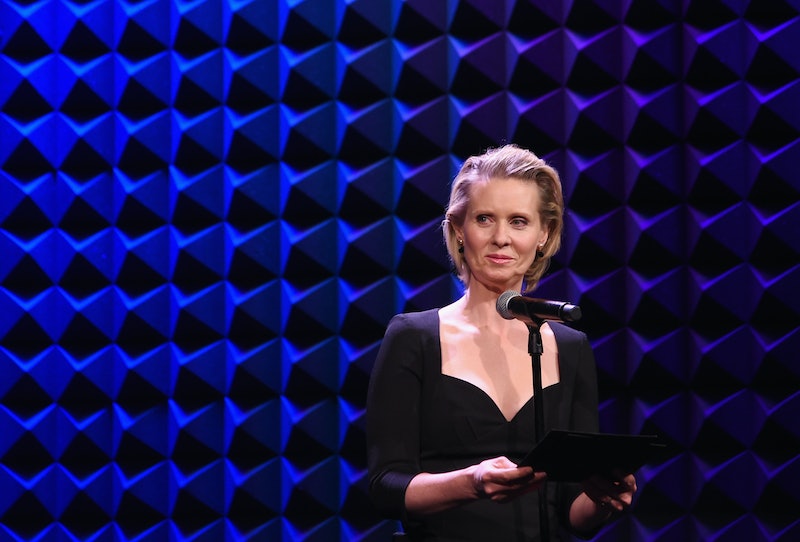 Since she announced that she was running for New York governor on Monday afternoon, the internet has been sharing all sorts of memories related to actress and writer Cynthia Nixon. Donald Trump handing her an Emmy back in 2004, though, just might take the cake insofar as it highlights the current intersection of entertainment and American politics.

In the video, which has been spreading around Twitter, Nixon and several of her fellow cast members from Sex and the City are up for an award for best supporting actress for their work on the hit show. Trump and Simon Caldwell — of American Idol fame — are handing out the award together, and Trump ultimately announces Nixon's win, handing the trophy off to her himself.

Nixon discussed the experience last summer in an interview with Variety. "Do I wish I had gotten my Emmy from somebody else? Yes, I do," Nixon said. "Absolutely I do. But, it’s not like he picked me. He just passed off the trophy."

Still, the video is a striking reminder of how dramatically American politics have shifted in the less than two decades since the Emmy show would have first aired. The man handing out the award is now president of the United States; the woman receiving it is running for New York governor.

However, unlike Trump, who seemed to rise to political success quite suddenly following his own campaign for elected office, Nixon's participation in the political arena has ramped up slowly over the last decade. In the past year alone she has penned several political op-eds, including one where she spoke out against Trump's presidential performance. On top of that, she has developed a reputation for championing funding for public schools.

Neither Trump nor Nixon are the first Hollywood entertainers to run for public office, of course. Terminator actor Arnold Schwarzenegger was governor of California from 2003 to 2011. And before him, Ronald Reagan acted for decades before serving as governor of the Sunshine State in the 70s, ultimately going on to be president of the United States from 1981 to 1989.

Notably, Trump, Schwarzenegger, and Reagan all ran for office as Republicans, as did a whole slew of successful actors-turned-politicians. Actors who run for office as Democrats have less successful reputations for clinching wins, though there are notable exceptions. Among them are former Sen. Al Franken and Jerry Springer, who served one year as mayor of Cincinnati.

Nixon will be taking on Democratic incumbent Andrew Cuomo, who has served as New York governor since 2011, and early polls indicate that New Yorkers are currently comfortable with the sitting state leader. According to a poll conducted by Siena College, if the gubernatorial election were to happen on the day of her campaign announcement, voters favor Cuomo to Nixon 66-19 percent. However, the state's Democratic primary isn't until Sept. 13, leaving candidates two whole seasons to make their case to voters.

While the poll indicates that Cuomo is in the lead, Nixon has positioned herself thus far as the anti-Cuomo. The only major policy platform on her campaign website as of Monday evening was a page titled #CUOMOSMTA, in which she eviscerates his handling of subway repairs — or lack thereof.

"Governor Cuomo has been focused on making superficial, cosmetic changes rather than fixing the real problems," her website reads. "He has completely neglected the non-glamorous infrastructure work that actually keeps the subway functioning."

According to the website, "Nixon rides the subway every day" and "understands first-hand the toll that his disastrous mismanagement of the MTA is taking on everyday New Yorkers." This characterization directly opposes the stereotype of the wealthy, out-of-touch Hollywood entertainer that Nixon is likely to butt up against on the campaign trail.

Cuomo, reportedly, is calm in the face of a campaign challenge. "I’m not nervous about whoever runs," Cuomo said last week, according to The New York Times. "There’ll be people who run. That’s called elections, and that’s fine." How either candidates' campaigns play out waits to be seen.