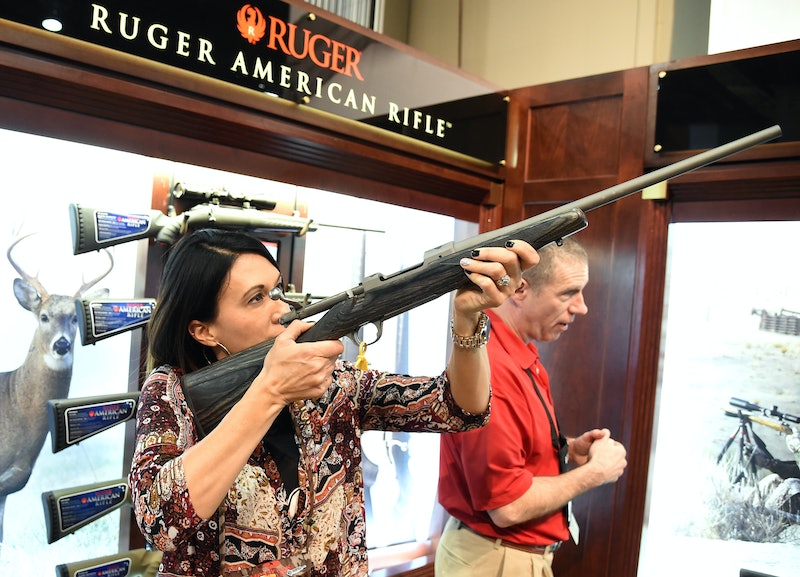 The are over 320 million guns in the US — that's roughly one gun per person. On top of the sheer number, our current gun laws make it pretty easy for an average citizen to walk into their local Walmart and, with relative ease, purchase a gun. In some states, they can then carry their gun to church, to work, or even to their child’s school; in states like Alaska, Missouri, and Vermont (just to name a few), they can even carry their gun with them in plain sight, wherever they go.

Staunch pro-gun advocates argue that the Second Amendment of our constitution gives citizens these rights, and that any infringement upon them violates our basic right as Americans to protect ourselves. But the U.S. also sees more mass shootings than any other country in the developed world, and that also seems like a violation of our basic rights. So how can we interpret the Second Amendment in a way that both respects its original purpose and attempts to address our country’s ever-growing gun problem?

“I think the Second Amendment is the best understood as protecting both the right to bear arms and the right of the people to regulate guns in the public interest,” Adam Winkler, a professor of constitutional law at UCLA and author of Gunfight: The Battle over the Right to Bear Arms in America, tells Bustle. When the Second Amendment was adopted in 1791, its proponents probably couldn't have anticipated modern issues like open carry laws, assault weapons, guns on college campuses, and access to silencers (and it's doubtful they could have imagined political lobbying powerhouses like the NRA). But what they did see was an opportunity to create a law that allowed citizens the right to discuss gun ownership as an option — as a potential freedom, if not a guaranteed one.

This flies in the face of many common — and some legal — readings of the Second Amendment. In 2008, the Supreme Court ruled 5-4 in a landmark case D.C. vs. Heller , the first Supreme Court case since 1939 that directly addressed the Second Amendment. The case, brought by Washington, D.C. security guard Dick Anthony Heller — who was allowed to carry a gun at work but not permitted to bring it home, due to D.C.'s anti-gun regulations — ultimately ruled that an individual holds the constitutional right to possess a loaded firearm for self-defense, regardless of service in a militia. The win ultimately overturned D.C.’s long-standing ban on handguns, as well as regulation against keeping guns loaded.

"The debate of the late 1780s was always about the status of the militia, not personal rights of self-defense."

“The majority in D.C. vs. Heller got the basic story wrong,” warns Jack N. Rakove, a professor of political science and law at Stanford University. “None of the framers or adopters of the Second Amendment thought that they were giving constitutional security to an individual's personal right to be armed. The debate of the late 1780s was always about the status of the militia, not personal rights of self-defense.”

In the U.S., the Second Amendment is often seen as the reason we can’t have more gun control, but cases like the above are the exception, not the rule. “Very few laws have ever been struck down under the Second Amendment,” says Winkler. “I don’t want to say there’s none, but we exaggerate its impact.”

“It is important to note that the Supreme Court's decision in Heller recognizes only an individual right of self-defense within the home,” adds Rakove. “The National Rifle Association and its allies have made numerous attempts to expand the meaning of the Second Amendment ever since.”

It’s also worth remembering that, historically, regulations under the Second Amendment did exist. At one time, laws existed that prohibited the sale of guns to Native Americans, restricted the storage of loaded firearms, and even banned gun ownership by citizens believed too dangerous to own guns.

“It wasn’t so much that [the Founding Fathers] were afraid of a shooting,” says Winkler, “but the point is that they understood guns were inherently dangerous items.”

The ten states with the worst gun death rates are all mostly Republican-leaning.

“What we're seeing [now] is that gun politics are outpacing the Second Amendment. The courts have never said [these things] are required by the Second Amendment. They’re required by the NRA, and by the politics, and by the political coalition that supports strong gun rights in America,” explains Winkler. “[The NRA] churns out a lot of single issue, pro-gun voters, just enough to scare elected officials.”

While the NRA and its allies have worked tirelessly to expand the scope of the Second Amendment, they have primarily found success in areas where they hold significant political clout, largely states with Republican leadership — and it's worth noting that the 10 states with the worst gun death rates, according to the Gun Law State Scorecard, are all mostly Republican-leaning.

And even that doesn't mean that there's no hope when it comes to passing more gun control legislation. “We’re passing really good laws at the state level,” Shannon Watts, the founder of Moms Demand Action for Gun Sense in America, the largest grassroots organization for gun control in the country, tells Bustle. "50 percent of Americans now live in states with universal background checks. The federal piece has been the rub.”

“In states and localities where [the NRA] is less influential, most of their challenges to gun care regulations that go beyond the confines of the home have failed,” says Rakove. “Advocates of gun rights like to talk about Second Amendment rights in the plural, but most courts who have heard cases challenging restrictions on gun owners have resisted these arguments.”

Even though it’s unlikely that we’ll ever see a formal change to the Second Amendment, Winker is convinced that the amendment in its current form is written in such a way that both gun advocates and those who are anti-gun should feel protected.

“The NRA pitches us a story about the Second Amendment being all rights and no regulation, but the very first part of the amendment is about regulations,” he says. “I think we can have both good gun regulation and gun rights.”