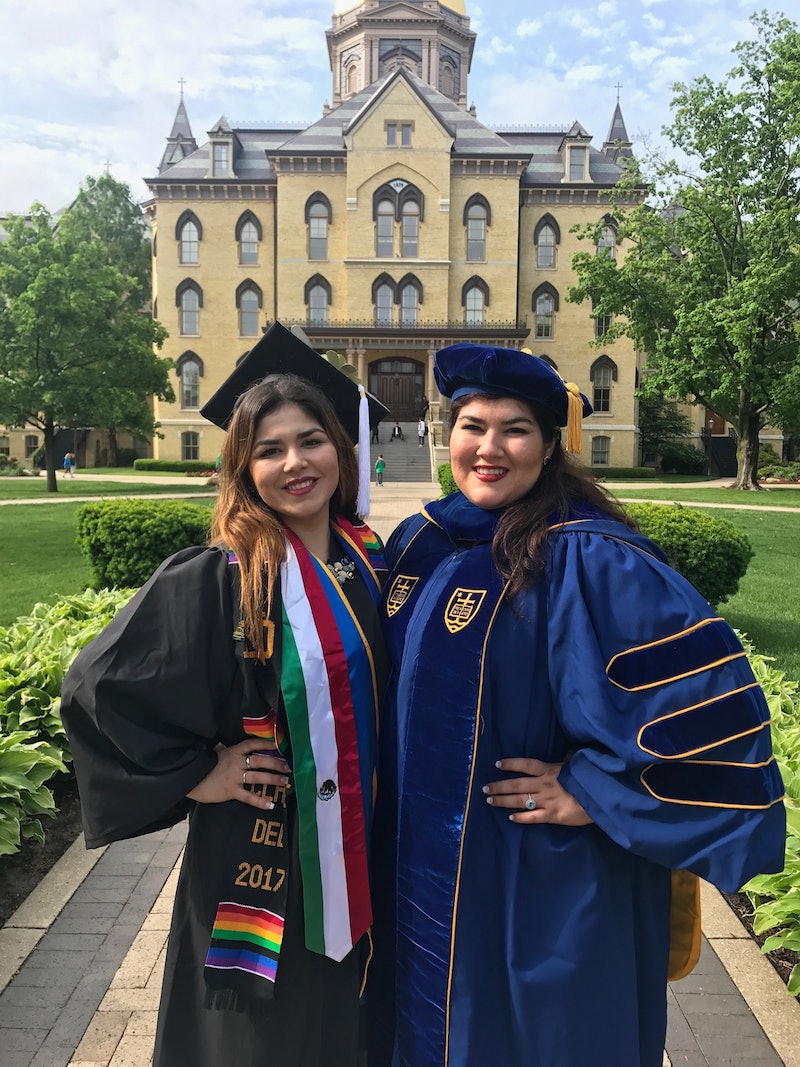 As not just one of the participants but organizers of WalkoutND — the Notre Dame walkout against Vice President Mike Pence — I know firsthand that our demonstration prompted a flurry of emotions for Americans watching and reading about our protest. Some said they were proud of us. Others, like those in the crowd who openly booed us, thought we were just bratty kids being utterly disrespectful.

But what if I told you, this seemingly fleeting moment was a result of nearly a whole year of organizing around issues of social justice and equity? This walkout was crafted and created in the most intentional manner, and that at the helm of this action are some of the most loving, compassionate, and selfless individuals I have ever met.

This all started election night, when my friends and I were slowly coming to the realization that, against all predictions, Donald Trump was elected as our 45th president of the United States. For many of us, Trump's victory brought on an overwhelming emotion of uncertainty. While some fervently watched the news, every day consuming outrageous headline after outrageous headline, others, myself included, feared for the safety of my community and for all marginalized communities.

After Nov. 8, a sense of hopelessness and helplessness could have set in. Instead, a group of us students organized in the middle of the night, and, by 9 a.m. the next morning, we were holding a protest with over 100 people. The faces among this crowd were diverse, demonstrative of the intersectionality of issues, such as those of immigration, racial justice, access to healthcare, and human dignity.

However, a theme was common among the sea of faces: there were eyes red from crying, voices cracking in pain, and sorrowful expressions. To many, the election confirmed their fears that their America didn't include people like them — that this America, one that was being hailed as a better version of the previous, erased any voice they had in not only political matters, but also personal matters. So, we moved forward, channeling our hurt, passion, and willingness to combat injustice into meaningful action and created the group We StaND For.

"When I stood up alongside 150 of the bravest individuals I knew and heard the chorus of boos and slurs, instead of being deterred, I felt at ease."

Throughout the second semester, We StaND For served as the modem by which we organized protests on campus: the sanctuary campus sit-in; a rally against the first Muslim travel ban enacted by Trump's administration; and, finally, our walkout from Commencement. When the invitation of Mike Pence as our commencement speaker was made available to the public, it was bittersweet.

We knew immediately that our commencement would be symbolic, and whatever we chose to do as a response would send a message. The question was now before us: what message did we want to send? We struggled with this and discussed at length alternative forms of resistance. Finally, we settled it: we would walk out when Pence came to the podium to speak, and our message would be one of love, unity, respect for human dignity, and solidarity with all marginalized groups.

Our organizing committee was comprised of individuals I have the great fortune of calling friends — those like Luis Miranda, Bryan Ricketts, Jessica Pedroza, Aniela Tyksinski, Amanda, Gabriela, and Juan — all of which devoted countless hours to the planning and organization of this event. As a diverse group of organizers, we all had different passions that were particularly close to our hearts, and we each had a way of going about things.

"We walked out because our differences make us better, and that is truly what makes us American."

However, our work rhythm hit a peak as we learned to be invested in not only our closest causes, but equally invested in each other's passions. Our perspectives became strengths, and we learned to share leadership amongst everyone. In our committee, we had members from the LGBTQ community and from racial, ethnic, and gender minorities. We were aware of the impact our action would have, so we were intentional about our approach. We made it clear that we stood in solidarity with all marginalized communities, not just those that we embodied as a group. We made it clear that we did this out of love for each other, not out of hate for Pence.

When the moment came to walk out, my stomach felt as if it were in a knot. When I stood up alongside 150 of the bravest individuals I knew and heard the chorus of boos and slurs, instead of being deterred, I felt at ease. I felt at ease knowing that standing up for what I believed in, while not well received by everyone, meant that I would not be complicit in the denigration of marginalized communities. This sentiment was pervasive among all those who chose to walk out.

"We walked out to reject the normalization of hatred."

Pence has shown, through his time in office as Indiana's governor and his collusion in the policies pushed by Trump's administration, that he does not stand in solidarity with marginalized communities.