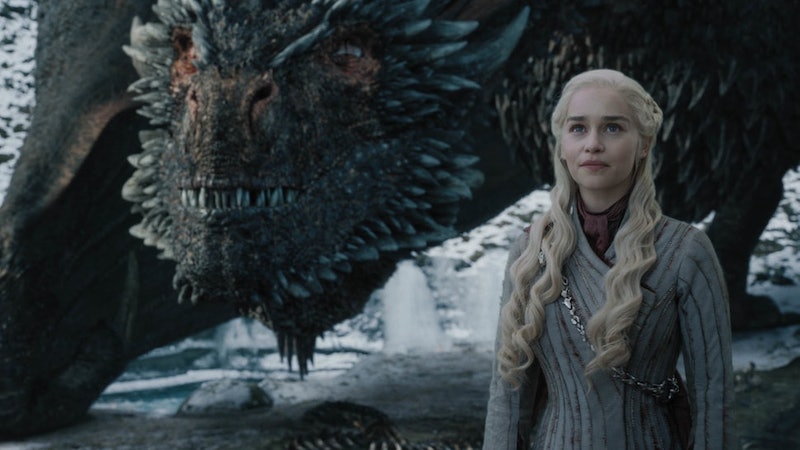 Spoilers ahead for Game of Thrones Season 8, Episode 5.

If you’re a devout GoT fan like me, Sunday night’s episode of Game of Thrones, “The Bells,” probably has left you feeling a rage and disappointment so acute, you’re ready to disown the show altogether. It’s no secret that this season has majorly let down its female characters and fans alike — Missandei, one of the few characters of color, died in chains in episode 4, Sansa's past abuse has been construed as character-building, and Cersei, formerly ruthless and relentless in her pursuit to keep the throne, died begging for her life under a pile of rocks. But no one else’s character has been so viciously and abruptly assassinated as Daenerys Targaryen.

From season one, Daenerys has been painted as a paragon for hope for the marginalized characters in the series. She lived a life in exile in Essos, overcoming abuse, repeated rape, and the loss of three children, dragons included. Through it all, she somehow managed to help slaves of Slavers Bay lead an uprising, and fight on behalf of women. Yes, her fiery ways often needed to be reined in by her advisors, but many can argue that a lot of her anger, and resulting actions, was justified.

When she sentenced people to death, it was often because they put her own life in danger, or proved to be her enemies. Before she burned Dickon and Randyll Tarly for fighting in Cersei's army last season, she gave them the option to bend the knee. When they refused, she made good on her word, so as to not seem like a weak ruler. But her character arc this season seems to suggest that ambition, for a woman, is a dangerous thing — a clichéd stereotype that women in power know too well. It doesn’t matter that Dany is now alone after everyone she loved died, or that she sacrificed half her army to help Jon Snow battle the Night king, only to be greeted by hostility from the North — she is portrayed as jealous, irrational, and genetically predisposed to madness, thanks to her father, the Mad King. Lucky for the Realm, there is a tempered and measured man — Jon Snow — waiting in the wings, and he will save us all, despite the fact that he also has the mad Targaryen gene and has showed no interest in ruling.

If you are just as pissed as I am about Sunday’s turn of events, there’s a psychological reason for it. According to Joshua Klapow, Ph.D., clinical psychologist and host of The Kurre and Klapow Show, our frustration initially stems from the intense emotional connection we are able to form with characters on television. When we can see ourselves and our current realities in a show, we become more drawn in and invested, he says. “The more we connect and the more we let go of our awareness that it is 'just a show,' the more we see parallels between the show and our current, past, future, or even desired lives," Dr. Klapow says. "[...] We allow our brains to do what they are great at doing — create realities."

On some level, we know that these characters aren’t real, but the hopes and fears we feel for them very much are. In Daenerys, many of us saw a feminist champion. She overcame seemingly impossible obstacles to amass power and an extremely loyal following. We can only hope she will save the seven kingdoms, especially as the audience endures the blatant sexism toward other characters (still trying to forget the treatment of Sansa's rape scene), and objectification of women in general.

But unfortunately, that hope we have for characters to be completely good can be misplaced, especially when the writers have other plans. “[...] Because it is not real life, we have the ability to project any qualities we choose on to [characters],” Dr. Klapow says. “We can take their redeeming qualities and boost them up. We can make them represent in our minds all the qualities that we may fail to see in others but want to be present.”

Basically, we give ourselves permission to project what we hope the world will look like onto characters, because we can. And many of us were all too ready to do that with Dany — it seemed like, for a while, that’s what the show wanted us to do. But Game of Thrones has a way of reminding us that reality, even in the realm of fantasy, can be cruel. Daenerys’ negative characteristics — her quick temper and brash decision-making — were always there, whether we chose to see them or not. Although, the series arguably spent a lot more time showing us her potential as a liberator and a ruler, Daenerys wasn’t intended to be the answer we hoped her to be. And for me, like many other viewers, the foreshadowing of Dany’s descent into madness seemed like a plot misdirect because she had to be the answer. If she wasn’t, I just spent nearly 10 years on a show that really was that sexist toward women, and I get enough of that in my daily life.

And that’s why this narrative choice stings so much — Dany’s quick and one-dimensional Mad Queen plot can feel like another massive letdown in creating a world that viewers want to live in.

“We have painted a picture of who this person should be and we have thrown our emotions into that,” Dr. Klapow says. “When they turn out not to be that person, the fall emotionally is even greater.”

I don't think Dany deserved to be a villain, nor do I think Game of Thrones did a very good job convincing us she inevitably would become one. And though it hurts that Daenerys will likely die next week as a result of her vilification, at least we can say we saw something in her at the start. That’s the aspect of her character I’ll choose to remember.