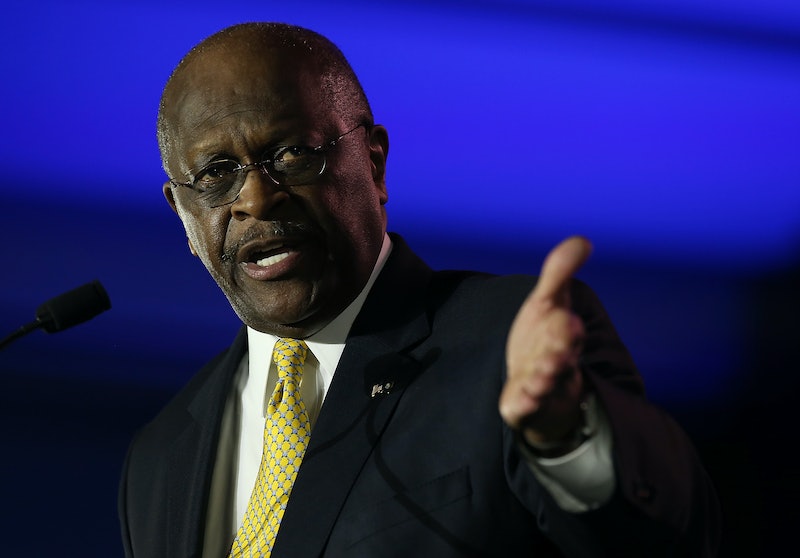 President Donald Trump's proposed nominee to the Federal Reserve Board has reportedly said he's uncertain he'll make it through the requisite vetting process. In a Facebook video, politician and radio host Herman Cain said his passing the federal background check was not a sure thing, according to Reuters. He reportedly pointed to opponents "already digging up all of the negative stuff that’s in storage from eight years ago."

However, Cain pointed to the amount of information that could be collected while authorities vet his background as part of the nomination process. (He's not the formal nominee yet, The Hill reports, because that process isn't yet complete.)

“They have to collect an inordinate amount of information on you, your background, your family, your friends, your animals, your pets, for the last 50 years," Cain said.

Trump, however, has appeared optimistic that Cain would be cleared for the nomination process, according to reports.

"I've recommended Herman Cain. A terrific man, a terrific person. He's a friend of mine," Trump told reporters on Thursday, according to CNN. "I've recommended him highly for the Fed. I've told my folks that that's the man and he's doing some pre-checking now and I would imagine he'd be in great shape."

One particular part of Cain's past that is likely to face scrutiny are allegations of sexual misconduct, according to The New York Times. Cain has categorically denied the allegations, which largely cropped up during his 2011 presidential bid, describing them at the time as a "character assassination," per the Times.

Lawyer Gloria Allred, who represented two of Cain's accusers, suggested to the Times that it was inappropriate for the president to praise Cain in light of the allegations against him.

“President Trump’s statement that Herman Cain is ‘a truly outstanding individual’ is a message that the president of the United States is willing to ignore the allegations of a number of women who alleged that Herman Cain either sexually harassed them or had an affair with them,” Allred said. “This message is an insult to women and should be condemned by the Republican Party and all those who care about respect and dignity for women.”

Cain cannot be formally nominated to the Federal Reserve Board until the vetting process has been completed, The Wall Street Journal reported. It wasn't immediately clear, over the weekend, when that process might wrap up.

Whether Cain will ultimately be nominated — let alone confirmed — is still unclear. If he does take a seat on the board, he will be filling one of two vacancies, according to The Washington Post. In the meantime, according to reports, federal authorities will continue to look into Cain's past, determining whether he is eligible for the position.

More like this
Police Shove 'Full House' Star Jodie Sweetin At An Abortion Rights Protest
By Radhika Menon
How 5 People Upended Their Lives To Fight For Abortion Rights
By Hannah Smothers
Boris Johnson’s Leadership Is In Question – Again
By Bustle UK
The UK Abortion Laws In 2022, Explained
By Sophie McEvoy
Get Even More From Bustle — Sign Up For The Newsletter