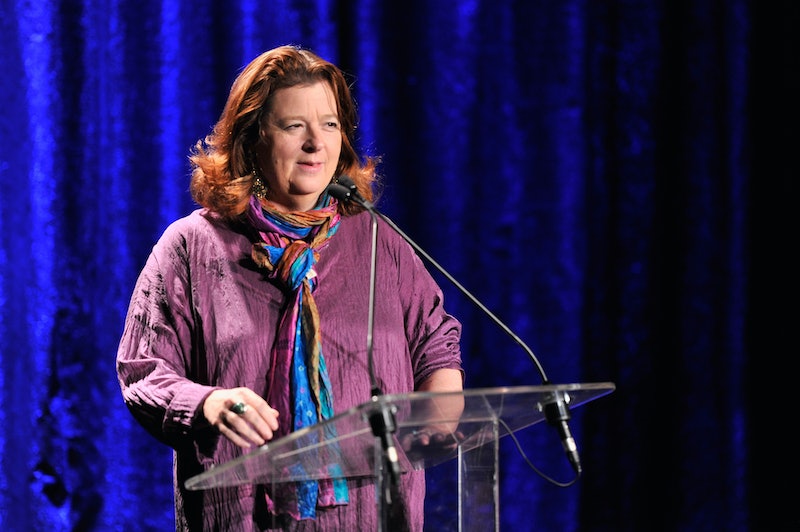 Being an ambitious woman in arguably any field is a difficult to navigate. But what about when your perceived ambition might be the reason you get fired? In Double Bind: Women on Ambition, a new book of essays featuring contributions from women like Roxane Gay and Francine Prose, Smash creator Theresa Rebeck claims that her ambition got her fired from the show that was, for a time, a total hit for NBC. According to Rebeck, it was allegedly in part because of her ambitious, take-no-guff attitude in the workplace. Bustle has reached out to NBC for comment, but has not heard back at this time.

The excerpt, published in Entertainment Weekly, begins with Rebeck claiming that she got to be not only the creator of Smash, but the person who wrote the entire show, helped move it from Showtime to NBC, and became the showrunner in the first season. All of this, according to Rebeck, contributed to her quick ascension on the Smash chain of command and left her co-workers (who were male) allegedly feeling threatened. She claims:

So I took the job, I wrote the pilot, I created all the characters, I nurtured it through a transition from Showtime to NBC, I produced the pilot, and the show got picked up for an order of seventeen episodes. I was the show runner of the first season, which got terrific numbers [...] At the end of the first season, I was fired without cause. [...] As the dust settled, it became clear that at the management level a lot of dastardly stories had been invented about my character.

While Rebeck was able to find work writing and directing in the theater and television, her essay implies that there may have been an alleged link to her immense and immediate success on Smash, the professional threat she allegedly posed as a woman in power to the men who worked for her, and just how far some may have allegedly gone to see her unseated. This not only reportedly threw Rebeck's life into a chaotic unknown, but she said she felt that the rumors that allegedly caused her to be fired from Smash seemed to follow her everywhere.

In reflecting on her life post-Smash, Rebeck writes of what it's like to confront her suspicions of the alleged misogynistic machinations against her. She claims as she lost her position of power, but the men seemed to flourish.

But I was convinced that I had to return to television. I felt cheated by what had happened on Smash, and I was determined that the men who had cheated me would not have the last word on my talent and my character. It pissed me off that the men at my level who had been fired in similarly ridiculous circumstances somehow managed to bounce upward. [...] To successfully run a television show, you have to be a general. I was an excellent general. But in order to prove I could do it again, I had to be a good girl.

Though unverified, it's frustrating to read even just this excerpt from Rebeck's essay because of the sentiments behind them. As an ambitious woman myself, Rebeck's assessment that you have to be a general as well as a "good girl" implies that you're always going to have to swallow some of your pride, take the sexism as it flies at you, and try to ascend as best you can in the face of it all. Sometimes, worst of all, you're going to have to watch others (maybe men), who may be more mediocre ascend higher than you.

The bottom line of Rebeck's essay is that ambitious women have the most to lose despite being told they can have it all. And the familiarity of that story hurts all the more.