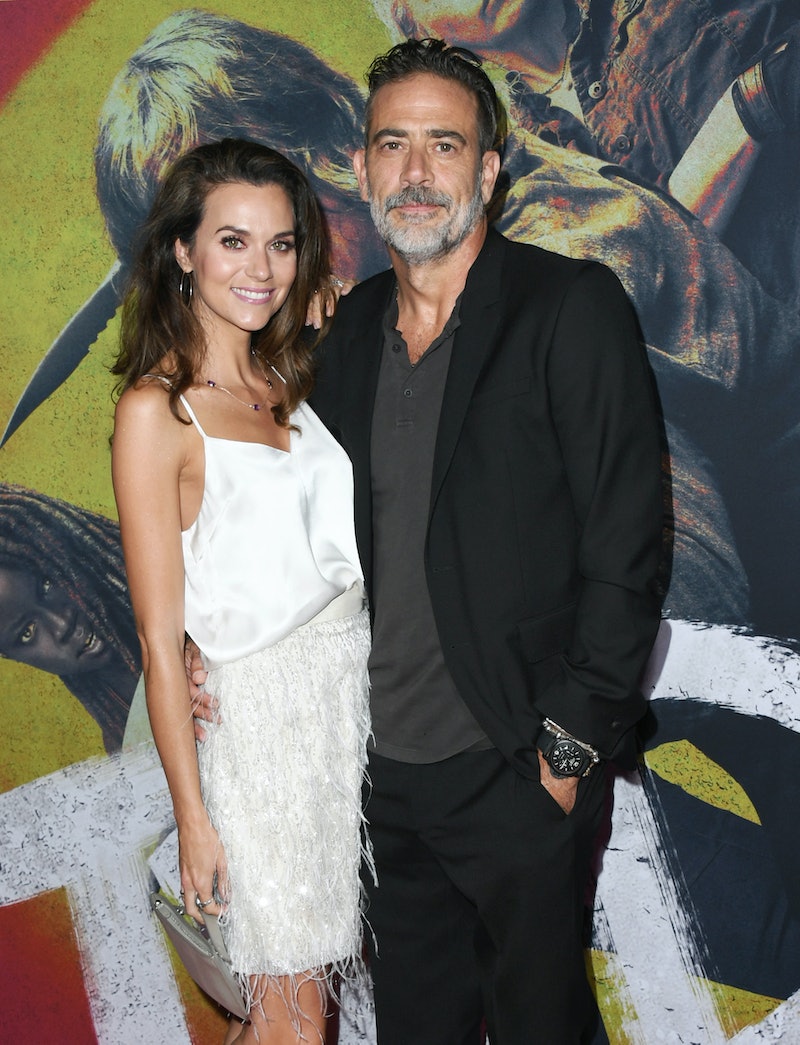 After being together for over a decade, Hilarie Burton and Jeffrey Dean Morgan got married in a secret ceremony on Saturday, Oct. 5. The couple confirmed their official newlywed status in separate Instagram posts on Monday, Oct. 7, which paint a decent picture of the star-studded event. The news comes after years of rumors that the duo were already married, though, obviously that wasn't the case at all. In fact, Burton used this opportunity to publicly set the record straight on their relationship, once and for all.

Burton's wedding Instagram announced that they had officially tied the knot, but also noted that she's always felt married to Morgan long before they ever signed a piece of paper making it official. "We’ve lived as husband and wife for a decade. We’ve built a family, and a farm and found our community," Burton wrote beneath a photo of the two embracing at their wedding. "For years, publications have reported that we got married in 2014 or 2015 and that I’ve been married and divorced before. All untrue. But WE knew our truth. So it felt silly to try and correct anything."

Burton went on to explain how Morgan instantly felt like her husband from the very beginning, and that while they didn't make vows to each other right away, they did it through their actions over the last 10 years. All of which ultimately made the ceremony even more special for the One Tree Hill actor. "Standing up there with our children at our sides — celebrating all that has been — was bliss," she continued. Burton and Morgan have two children together, their 9-year-old son Gus and 1-year-old daughter George.

"I love you Jeffrey. I love our intimate group of friends and family who joined us. I love the various circles of loved ones who have supported us over the years. It was private and magical and everything I dreamed. So yeah. I’m Mrs. Morgan."

Morgan made a point of sharing a few photos of the wedding on Instagram as well. "I’d say words... but there aren’t any," he captioned one image of the two of them. "Mrs Morgan.... I love you. Thank you for making me the luckiest man in the world." In another photo, the actor even went so far as to provide a few pivotal details about the ceremony that's guaranteed to give fans major FOMO. For instance, Morgan revealed that the ceremony was performed by his Supernatural costar and on-screen son Jensen Ackles and his Walking Dead costar Norman Reedus. And to top it off, the picture that accompanied the information showed Burton's longtime friend and One Tree Hill costar Sophia Bush celebrating alongside them. "Thank you to all our friends and family. It was, without a doubt... the best day of our lives. Ever ever," he added. "Just never knew that it could be so damn perfect. It was. And more."

The couple's famous friends have played a big part of their love story. It was actually Ackles who introduced Morgan to Burton on a blind date way back when, as Morgan revealed during a 2015 appearance on Huffington Post Live that it was Ackles who actually introduced him to Burton on a blind date. "Jensen Ackles introduced me to by significant other on a blind date," he said. Ackles' wife, Danneel Ackles, had starred on One Tree Hill with Burton, and the connection was, according to Morgan pretty instantaneous. So instantaneous in fact that he was able to convince her to change her planned trip to Paris and go visit him in New Mexico instead. And it only took 4 years after that interview for the two to officially tie the knot.

More like this
Who Is 'Umbrella Academy' Star Elliot Page Dating After His Divorce?
By Jake Viswanath
‘RHOA’s Shereé Whitfield’s Boyfriend Tyrone Gilliams Hinted He’s Single
By Brad Witter
At 28, Emma Thompson Was Already A Star — But Unhappy In Love, Actually
By Olivia-Anne Cleary
‘The Bachelorette’s Michelle Young & Nayte Olukoya Explained Their Breakup
By Stephanie Topacio Long
Get Even More From Bustle — Sign Up For The Newsletter