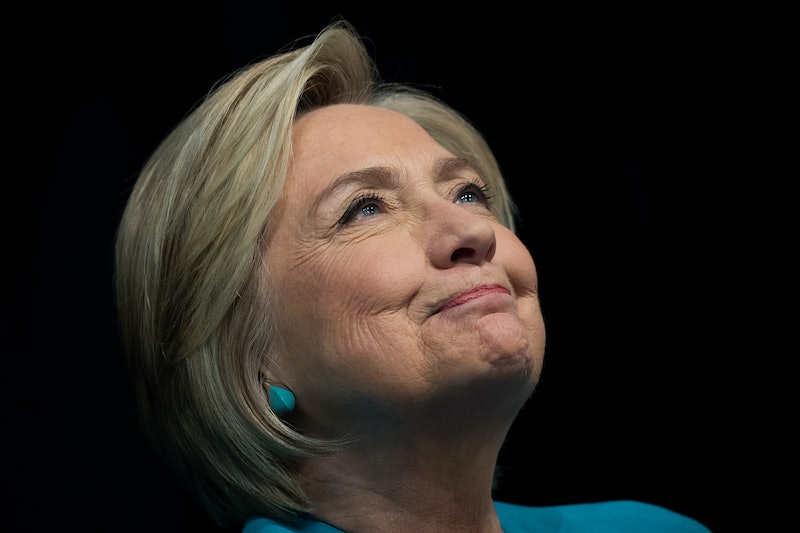 On Friday, the Trump administration announced its decision to effectively strip the Obama administration's birth control mandate for employer-based health insurance. The rule change means that any company of any size, even publicly traded ones, can now cite a religious objection to avoid having to provide contraceptive coverage to its female employees, thus opening up a loophole that could be detrimental to countless women who get health insurance through their jobs. And a day later, the former Democratic presidential nominee weighed in: Hillary Clinton blasted Trump's birth control order as a "blatant disregard" for women and their health care needs.

Clinton, who ran for president as a strong supporter of former president Barack Obama and his signature achievement, the Affordable Care Act, has long been a vocal advocate for women's reproductive choice, and for the widespread availability of contraception. Notably, as Susan Wood detailed for Rewire, Clinton helped make emergency "Plan B" contraception available without a prescription while serving in the U.S. Senate.

In short, this is an area that she's shown a lot of interest and conviction in throughout her political career, so it comes as no surprise that she chose to speak out after the announcement from the Trump administration's Department of Health and Human Services.

The Affordable Care Act, in concert with the Obama administration's rules on employer-based health insurance, created a system whereby women who got health insurance through their jobs had the security of knowing they've get free contraceptive coverage along with it. The mandate was instantly controversial, and it led some closely-held companies and faith-based nonprofits to launch legal challenges, like Hobby Lobby, and the Little Sisters of the Poor.

The Hobby Lobby case ended up making it all the way to the Supreme Court, which ruled in a 5-4, partisan-line decision that closely-held companies ― which are broadly defined as companies where a majority of shares are controlled by a small number of people, specifically five or fewer going by the IRS definition ― were within their rights to defy the birth control insurance mandate on religious grounds.

The Trump decision means that the possibility of a religious-based exemption has now been extended to virtually any company that chooses to pursue it. And considering this is a new means corporations could use to cut some of their own costs and shift them onto their workers, it's not hard to imagine some of them wanting to take advantage. Financial and profit incentive is a powerful force in capitalist systems like America's, after all.

Moreover, there's no telling how much scrutiny, if any, the administration will actually apply to determine whether claimed religious objections are deeply-held, and in sincere good faith. In other words, it's unclear just how big a potential loophole this could end up being, but there's not going to be any time to assess that question before the changes take effect. To the contrary, the stripping of the birth control coverage mandate, from the time it was announced by the HHS, were intended to take effect immediately.

Clinton's tweet criticizing the Trump administration included an link to a tweet from Planned Parenthood, similarly bashing the decision, and urging its supporters to "fight back" in the form of sending messages to the White House.

Clinton kept a fairly low profile in the weeks and months immediately following her loss in the 2016 presidential election, outside of the occasional selfie someone would snap with her after seeing her taking a walk through the woods. She's made something of a bigger return to public life in the past couple of months, however, thanks in large part to the release of her memoir and campaign postmortem What Happened, and the ensuing book tour that's come with it.