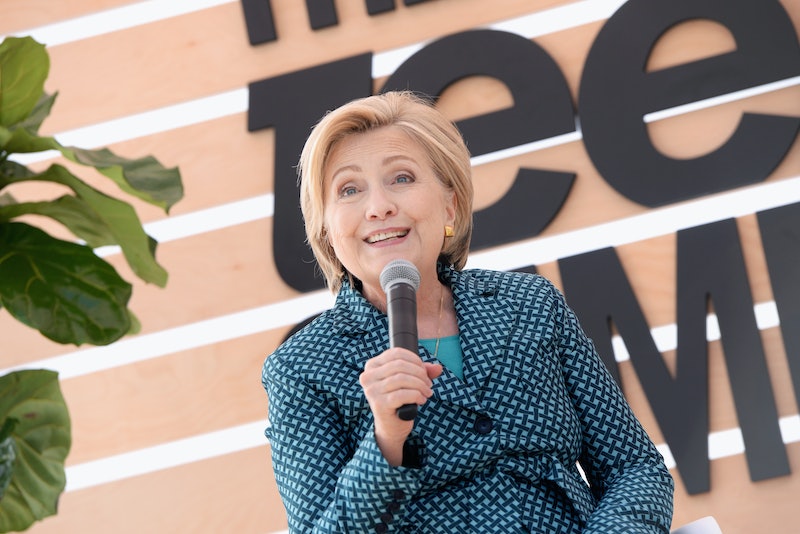 In 2017 gender double standards are still a huge problem. One double standard was spotlighted on the national stage during the second presidential debate between Hillary Clinton and Donald Trump in Oct. 2016. "He called me names... he was nasty, remember when he called me a nasty woman for questioning him?" Hillary Clinton recounts at Teen Vogue's Summit in LA. Clinton recalls using every ounce of her being to keep her composure and resist displaying how she really felt — because god forbid a woman is assertive or angry. Yet a month later, Trump won the election. "All of that stuff that he did, it didn’t end up hurting him that much," Clinton says. Now, Clinton's giving women advice on fighting unfairness and preventing it from continuing in the workplace at all.

While Clinton seems disheartened retelling her story, she's also so sure of its source. "Men are given a much broader range of emotions in order to demonstrate their ‘authentic feelings,'" she says. In doing research for her book What Happened, there were disturbing findings which proved a man’s professional success makes him more likable, whereas it’s been the exact opposite for women, basically until this point. She also found talking on behalf of someone else is generally better received than sticking up for oneself. How can women succeed with that kinds of suppression?

Discussing and reading/writing about the problem isn't enough. There needs to be action in daily life. Clinton continues:

"We have to make it — not only safe for women — we have to make it possible for us to express the full range of human feeling and emotion in whatever space we find ourselves without being so negatively judged… so it’s not viewed as somehow disqualifying if you are speaking up for yourself."

She then offers the young audience specific advice they can use in the office, not only to stand their ground, but take ownership of their work and feelings. "For example, if you’re in a meeting... maybe one of the only women... and you express and idea and no one pays attention to you," she says. "Then a few minutes later, a man says a same thing and everybody says what a great idea that is. We need to be willing to say, ‘I’m so glad John agrees with my idea.’"

Clinton inspires the crowd by showing listeners the only tool they need to combat these double standards: themselves. The circumstance is certainly relatable, although Clinton unfortunately experienced hers on such a public stage.

"When you’re the first woman nominated to be president by a major party, you have no margin for error," Clinton recalls, saying she was watched and judged literally every moment of the day. Even if her opponent inappropriately stalked, loomed, and made faces at her during the debates (which is how she describes it), she could not let herself crack. "If a woman gets upset, it’s viewed as being angry or too emotional... I prepared to be composed and calm no matter what he said or did," she says. A man wouldn't be scrutinized and ridiculed for displaying such emotion, at least not like a woman would.

In hindsight, Clinton admits turning around, getting in his face, and saying, "You love to intimidate women, back up, you creep," would've been "really satisfying." Still, she's still unsure if it would've been worth it, all because of the double standard:

"Given the way women are covered, it probably would’ve [been], ‘Oh, she can’t take it. How could she be the commander in chief if she can’t take a little aggressive behavior on stage?’ or, ‘Oh, she got so angry, last thing we want is an angry woman in the Oval Office.’"

Clinton does anything but shy away from the experience. She embraces it and hopes young women learn from it. "Communicate all of those feelings without getting hammered by all the sexist double standards," she says is the goal. "I’m really hopeful."

She should be, because that crowd of women was certainly listening and most definitely inspired by her smart and thoughtful advice.

More like this
Sandra Bullock, Girlboss Extraordinaire
By Matt Harkins & Viviana Olen
Yes, Billboard Queen Angelyne Really Ran For Governor Of California
By Brad Witter
Spice Girls’ Net Worth: The Richest Member Is Wealthier Than The Rest Combined
By Hugh McIntyre
10 Times Diana & Meghan Spoke Similarly On The Royal Family
By Sophie McEvoy
Get Even More From Bustle — Sign Up For The Newsletter