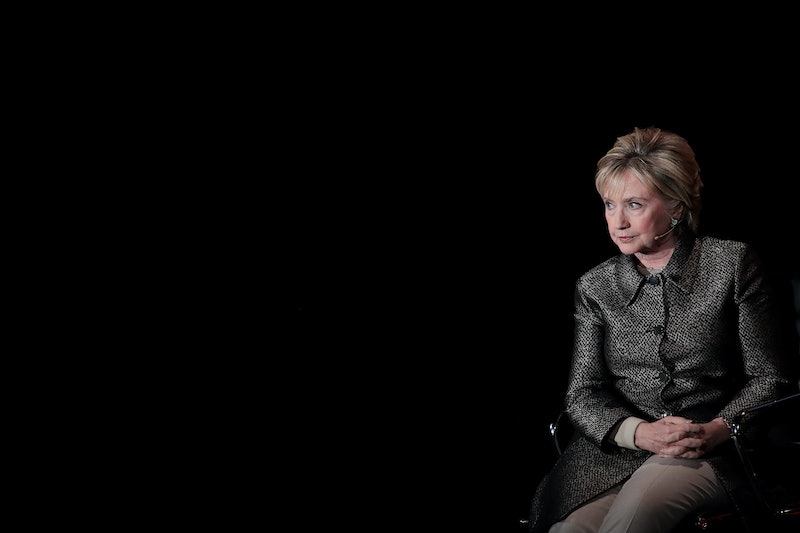 Former Secretary of State Hillary Clinton highlighted the hypocrisy of President Donald Trump citing the "beautiful babies" killed in a chemical weapons attack in Syria as one of his reasons for ordering Thursday's U.S. missile strike against a Syrian government airbase while his travel ban still barred Syrians of all ages from entering the United States as refugees in a speech made Friday at a luncheon for Annie's List in Houston, Texas. Clinton urged Trump to develop a strategy for ending Syria's civil war that was consistent with American values.

While Clinton condemned Syrian President Bashar al-Assad's deadly use of chemical weapons in an attack on Khan Sheikhoun in Syria's rebel-held Idlib Province, she cautioned against acting without a broad strategy for ending Syria's six-year civil war in place. "It is essential that the world does more to deter Assad from committing future murderous atrocities," the Houston Chronicle reported Clinton said Friday. "But the action taken last night needs to be followed by a broader strategy to end Syria's civil war."

Although Clinton supports bombing Syrian government targets, she noted Friday that it was hypocritical for Trump to use Syrian children as the justification when he'd signed an executive order banning all Syrian refugees from entering the country shortly after taking office.

"I hope this administration will move forward in a way that is both strategic and consistent with our values," Clinton said in a speech at the Annie's List luncheon, as Time reported. "And I also hope that they will recognize that we cannot in one breath speak of protecting Syrian babies and in the next close America's doors to them."

In announcing he'd ordered a targeted military strike on an airfield in Syria late Thursday in retaliation for Assad's use of chemical weapons, Trump stressed that children and babies had been killed in the attack on Khan Sheikhoun. "Assad choked out the lives of helpless men, women, and children," the president said. "It was a slow and brutal death for so many — even beautiful babies were cruelly murdered in this very barbaric attack. No child of God should ever suffer such horror."

Clinton's support for Trump's strike against Syria is unsurprising. The former secretary of State had expressed support for bombing Assad's airbases hours before Trump ordered a Tomahawk missile attack on a Syrian regime airfield. "I really believe that we should have and still should take out his air fields and prevent him from being able to use them to bomb innocent people and drop sarin gas on them," Clinton said Thursday in an interview with New York Times columnist Nick Kristof at the annual Women in the World Summit.