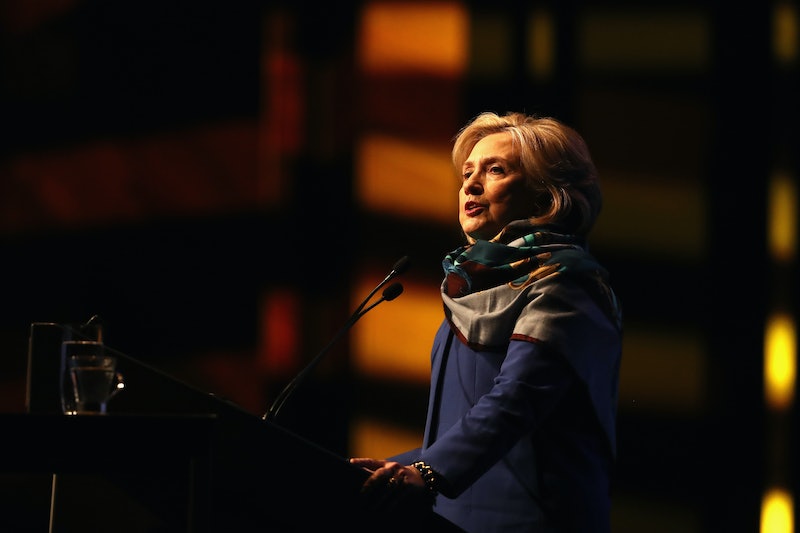 With the president and Congressional leaders no closer to a spending deal, the partial government shutdown entered its 22nd day on Saturday, making it the longest shutdown in American history. Although only a partial shutdown, the funding gap has left hundreds of thousands of federal workers without paychecks and caused operations at several key agencies to grind to a halt. Now, Hillary Clinton has responded to the ongoing government shutdown with an impassioned call to action.

"As of today, this shutdown is the longest in history," Clinton tweeted Saturday. "The costs are already high." The former Democratic nominee then went on to list just some of the ways the shutdown had come to affect people around the country. "People are missing paychecks, losing business, or working without pay," she wrote. "Our national parks are overrun with trash. The FDA and FBI warn of the harm to our food safety and national security."

In her tweet, Clinton supplied the phone number for the United States Capitol switchboard. Those who opt to call the switchboard can easily be connected to their senators' office via a switchboard operator. Alternatively, Bustle has more information about how to call your senator about the government shutdown here.

Clinton also urged her supporters to encourage anyone they knew who lived in Kentucky to reach out to Senate Majority Leader Mitch McConnell. "Make sure your friends and family in Kentucky call @senatemajldr," she tweeted along with phone numbers for all four of the senators' offices.

According to Reuters, McConnell has vowed to block the Senate from voting on legislation that would effectively end the shutdown without providing the border-wall funding President Donald Trump has demanded. So, while the House has passed a number of piecemeal spending bills aimed at funding government agencies one by one, those bills have been more or less DOA in the Senate.

When Senate Democrats took to the Senate floor on Thursday to urge McConnell to call a vote on the bills, he refused. According to CNN, he characterized a vote on legislation the president had already refused to sign as "political stunts" that "are not going to get us anywhere."

"The last thing we need to do right now is trade pointless — absolutely pointless — show votes back and forth across the aisle," CNN reported McConnell said Thursday in a speech on the Senate floor.

"Sen. McConnell and his caucus are AWOL in the middle of this shutdown. They are hiding out," CNN reported Democratic Sen. Chris Van Hollen said on the Senate floor Friday. "They want to hide behind the President instead of doing their jobs as leaders in a co-equal separate branch of the government."

With the shutdown reaching its 22nd day on Saturday, it has broken the record for longest government shutdown. Previously, the record was held by a shutdown that lasted 21 days and occurred during former President Bill Clinton's presidency in 1995.