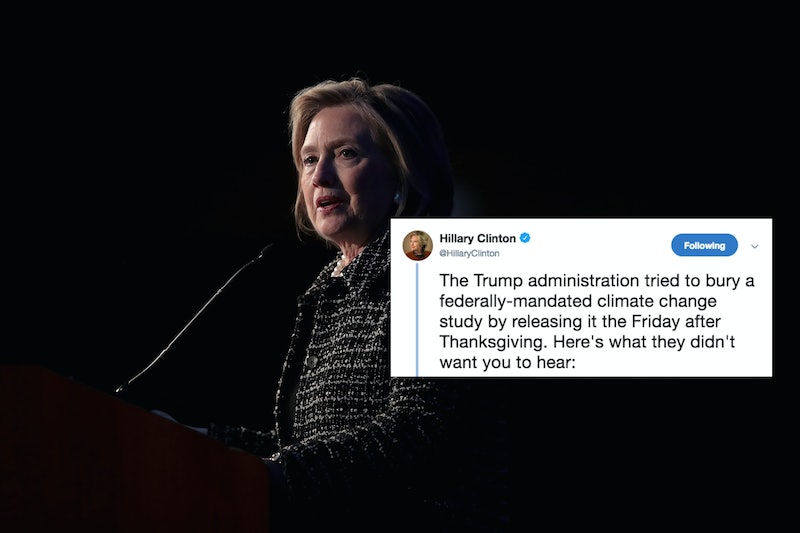 By now, you've probably already heard about President Donald Trump's reaction to his own government's U.S. Climate Assessment. Hillary Clinton also responded to the administration's federal evaluation on Twitter on Monday, saying, "The Trump administration tried to bury a federally-mandated climate change study by releasing it the Friday after Thanksgiving." In her thread, Clinton laid down key points from the assessment — and they don't paint a pretty picture.

When asked for his comment on his own administration's climate assessment, Trump said, "I don't believe it." But Clinton quoted significant bits and pieces of the report, including one part that warns, "Regional economies and industries that depend on natural resources and favorable climate conditions, such as agriculture, tourism, and fisheries, are vulnerable to the growing impacts of climate change."

Some people may already know about Trump's opinion on climate change. After all, the president has elicited criticism for his dismissal of it. In 2012, for example, Trump tweeted, "The concept of global warming was created by and for the Chinese in order to make U.S. manufacturing non-competitive." Then in June, 2017, the president withdrew the United States from the Paris Climate Agreement, saying that he represented "the citizens of Pittsburgh, not Paris."

Clinton didn't stop at just quoting the report on climate change and the potential dangers it carried for national economies. She quoted the assessment further, pointing out the financial perils of carbon emissions. "With continued growth in emissions at historic rates," the report notes, "annual losses in some economic sectors are projected to reach hundreds of billions of dollars by the end of the century — more than the current GDP of many U.S. states."

The former Democratic presidential candidate added, "Of course, combating climate change is about more than dollars and cents. It's a moral imperative. Our children and grandchildren deserve to live on a planet that can support their lives, liberty, and pursuit of happiness."

At one point in the report, researchers said that climate change would especially harm the indigenous people of the United States. It noted that such a volatile environment would affect indigenous people's "livelihoods and economies, including agriculture and agroforestry, fishing, recreation, and tourism."

The reason for this particular type of vulnerability, the report argues, is because Native people, compared to other communities, often rely on natural resources for "economic, cultural, and physical" benefits. A bit of good news, though, as researchers noted that indigenous people had already taken proactive means, in their own capacities, to mitigate the effect of climate change around them. Still, the report argues for more collective and broader responses to climate change.

It comes down to the basics, according to the report. Researchers argued that something so necessary and vital to life as water is under threat, too. Just some of those dangers include "intensifying droughts, increasing heavy downpours, reducing snowpack, and causing declines in surface water quality."

Considering the grave nature of the assessment, it's no surprise that Clinton quote-tweeted some of its main findings. But it's not known for sure whether Trump will pay heed to the report's troubling conclusions.