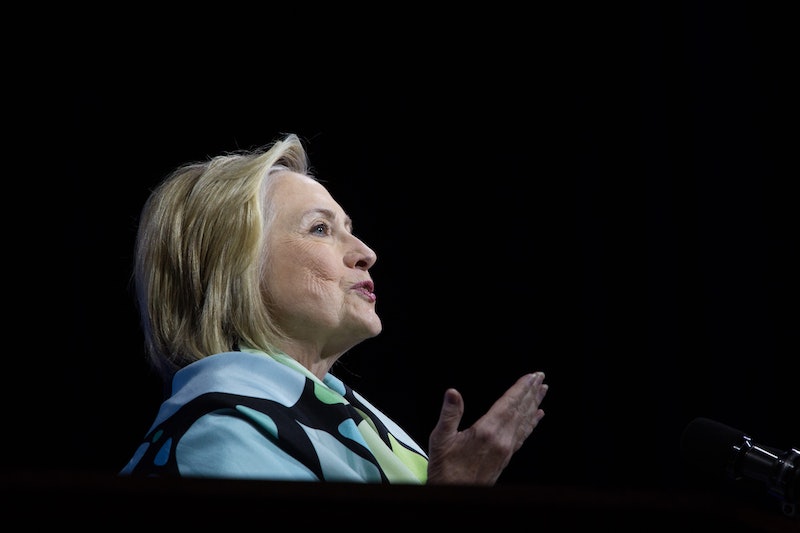 At an event hosted by Georgetown University's School of Foreign Service and its Institute of Politics and Public Service on Wednesday night, Hillary Clinton said Trump's INF treaty withdrawal was a "gift" to Putin. Clinton further argued that the United States should have pushed back on Russia instead of pulling out of the deal, formally known as the Intermediate-range Nuclear Forces (INF) Treaty, earlier this month. And in case you aren't familiar with the treaty, Clinton put the potential consequences of withdrawing from it into perspective.

At the event, Clinton first pointed out how she thinks the INF treaty situation could have been better dealt with — at least in the United States. She said, per The Washington Post,

I think there is agreement, it started in the Obama administration, that the Russians were not only developing intermediate-range capacity, but deploying it — and so, when that happens ... it seems to me that you want to do some public diplomacy. We clearly have pictures and we clearly know a lot about their cheating, and we should have done a better job in making it abundantly clear, not only to the American people but the Russian people, and Europeans, and others who are on the front lines, that the Russians were evading responsibilities in the INF.

Clinton continued, "And we should have also demanded immediate talks to lay on the table what we knew, and to begin a process of trying to push them back."

Then, Clinton brought the issue back to Trump.

"Instead [of that]," she explained to the crowd, "We pull out. And the Russians ... they're going to go forward and develop even more of these."

Clinton then tied up the situation into a greater global context, making it clear to everyone what was at stake with the withdrawal of this treaty. "It increases the unpredictability, and I believe the danger, that can come from throwing around more missiles and weapons of all kinds, but particularly nuclear ones, within the European theater," she said.

In October, Trump announced his intention to withdraw from the INF treaty, which was first established in 1987, via the Arms Control Association. Trump said at a rally in Nevada at the time, per the association, “Russia has violated the agreement; they have been violating it for many years. And we’re not going to let them violate a nuclear agreement and go out and do weapons and we’re not allowed to.”

On Wednesday, Russia announced that it planned to withdraw from the treaty as well, with plans to formally exit in six months. Per CNN, Russia has consistently denied any wrongdoing, and maintains that the accusations from the Trump administration (that Russia has been violating the agreement since 2014) are fully "unfounded."

To CNN, Lynn Rusten, a vice president at the nonprofit organization, the Nuclear Threat Initiative, explained just how dangerous this situation could be. "We are heading into a direction we have not been in in 40 years," she said to the outlet. "No arms control limits or rules that we are both following, and that is very dangerous."