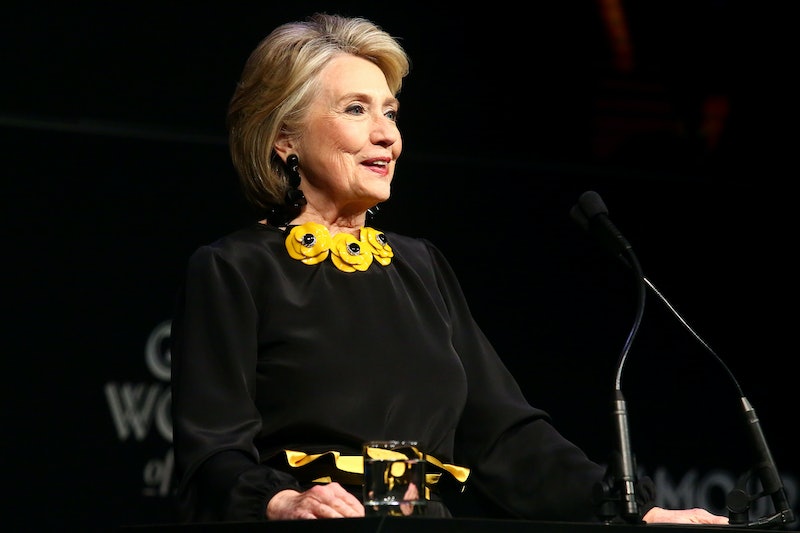 The dust from the midterm elections has barely settled, but 2020 is already on many voters' minds. As speculation grows around who will run for president in two years, former Secretary of State Hillary Clinton has been floated by her past advisers as a possible contender. However, what Clinton has actually said about 2020 suggests that she may not be seriously considering a third presidential bid.

A little over a year ago, Clinton told BBC Radio 4 that she's "not going to run again," and that she would instead to devote her energy to resisting President Donald Trump.

"I think I'm in a position where my voice will actually be magnified because I am not running [for office]," Clinton said last October, "and there's a very good basis, as we watch Trump's support shrink, that people will say, 'Well, what she said was right and now where do we go from here?'"

Since then, however, former Clinton advisers can't seem to agree on whether their one-time boss will run again. Mark Penn, who once served as a senior adviser to Clinton and her husband, published an op-ed in the Wall Street Journal last week insisting with certainty that "Hillary will run again." Former Clinton spokesperson Philippe Reines, however, slammed Penn for being out of the loop, and implied that there are no plans currently in motion for Clinton to launch a third bid.

Despite her formers advisers' disagreements, Clinton herself has not talked about 2020 with nearly the same amount of certainty. Although she initially shot down the possibility of running for president yet again, she told Recode's Karen Swisher in October that she foresaw "so much work to be done" following the next presidential election.

"Well I’d like to be president," after some prompting from Swisher. "The work would be work that I feel very well prepared for having been at the Senate for eight years, having been a diplomat in the State department, and it’s just going to be a lot of heavy lifting."

Clinton added that she could not even think about 2020 until after the 2018 midterm elections, noting that her primary goal was to get "a Democrat in the White House come January of 2021." But now that the election is over, Clinton has left voters wondering whether she will pursue the presidency. Following the Recode interview, however, Swisher took to Twitter to clarify Clinton's comments, suggesting that "she was basically implying she wishes she were president but doesn’t relish running again.”

A potential Clinton run in 2020 has already generated controversy among Democrats, particularly those who identify more closely with the progressive wing of the party. According to Politico, many Democrats have acknowledged Clinton's vocal criticism of Trump as useful, but they are also concerned that young progressives are resolutely opposed to a Clinton nomination.

Many political commentators and former Clinton advisers have offered their own opinions on whether or not the former secretary of state will launch a third presidential bid. But what Clinton has said herself about 2020 appears to indicate that she is unlikely to run — even if she wishes that she could be president.