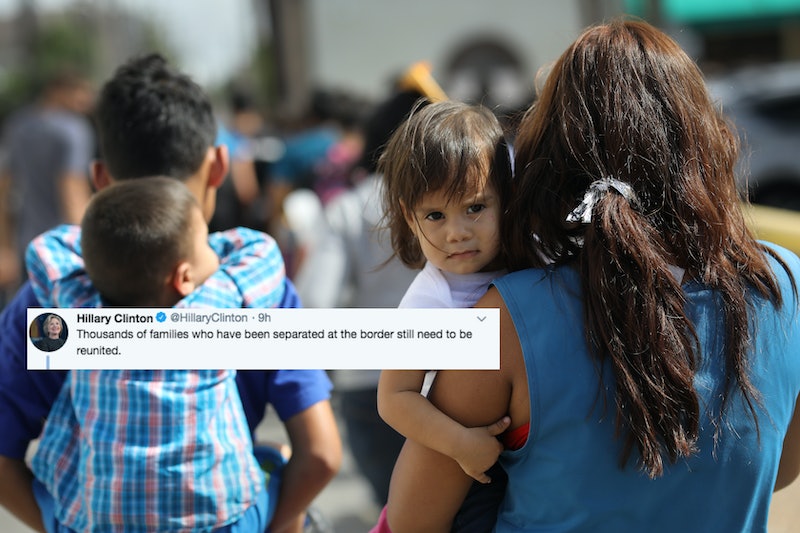 Many who were appalled at the Trump administration's family separation policy may have also felt limited by the ways to help. Many have donated money for legal aid and translation services, but a recent message from a former presidential candidate has brought attention to another possible way. Hillary Clinton's Flights For Families tweet suggests a new route that people can take to help reunite families that have been pulled apart.

On Monday, Clinton wrote, "Thousands of families who have been separated at the border still need to be reunited. In some cases, children have been sent to states far from Texas and Arizona, where their parents were detained." Clinton then provided a link for those who wanted to help. You can find the website here.

Clinton pointed out that a coalition of groups called Families Belong Together is set on raising money for flights, hotels, and cellphones for families that had to journey across states to reunite with their loved ones. The coalition's website states that the money raised will assist in reunifying kids split from their families at the border by using donations to "pay for airfare, hotel, and personal items for children and parents released from detention." The sites lists Families Belong Together as a group made up of the National Domestic Workers Alliance, ACLU, Women's Refugee Commission, MoveOn, FWD.us, United We Dream, and others.

The Families Belong Together coalition has said the Trump administration is forcing migrant families to pay for their own long distance travel as they attempt to find their children, according to Mashable, and the cost doesn't come cheap: The travel expense can shoot beyond $3,000. For a migrant child to leave a detention facility, parents and other relatives are required to pay for a one-way plane ticket and a return ticket for an adult escort, according to report from The New York Times.

On top of that, as The Daily Beast reported, parents who are detained are told that they must cover the cost of DNA testing in their attempts to find their children. The tests are part of the Trump administration's effort to reunite the families but it comes, for some families, because government officials initially took the documents proving that the parents are related to their children, The Daily Beast reported.

As of Monday evening, Families Belong Together has raised nearly $150,000 of their $200,000 goal, which would help a listed number of 1,984 migrants released from detention.

Families Belong Together's website detailed what donations would be "immediately" used on, which included family reunification travel expenses from transportation, housing, and "a small personal kit to help families get started." The group would also assist immigration experts who speak Spanish and are volunteering their time with traveling to make sure that all families have proper support. The group wrote that "since the Trump Administration is not reunifying families at the appropriate pace, any additional funds that cannot be used for travel will go to support efforts to reunify the families immediately."

In another Monday tweet, Clinton also shone a light on specific groups that are working to bring families together. Some of these organizations include the American Civil Liberties Union (ACLU), the Refugee and Immigrant Center for Education and Legal Services (RAICES), and The National Domestic Workers Alliance, a civil rights advocacy group.

Clinton also retweeted a message from The National Domestic Workers Alliance, which stressed "thousands of boys and girls are still separated from their parents and need our help to meet with their families" and that donations would help pay for flights, hotel, and a cellphone to talk while families waited to be together with their children again.

Advocates are slowly bringing kids — many of whom are extremely young and may have suffered psychological trauma — back together with their parents, but it's a slow process that is unpredictable in its conclusion.