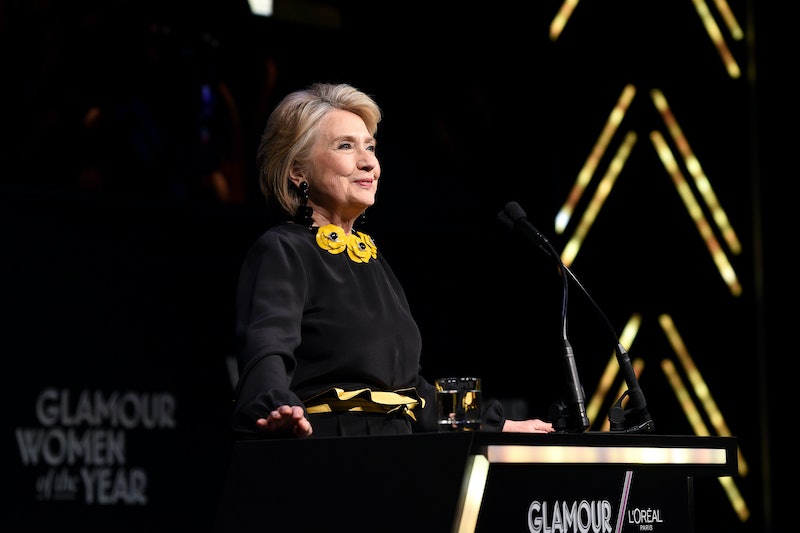 A certain former Democratic presidential candidate recently seized an opportunity to comfort a young girl from Maryland, The Washington Post reports. Writing with both sympathy and advice, Hillary Clinton's letter to a student who lost her class president election encouraged an eight year-old girl to never stop fighting for what she believes in.

"While I know you may have been disappointed that you did not win President, I am so proud of you for deciding to run in the first place," the former secretary of state wrote in a letter dated Dec .6, which was first reported on by the Post. "As I know too well, it’s not easy when you stand up and put yourself in contention for a role that’s only been sought by boys."

Martha Kennedy Morales, a third grader who is in a class that includes third and fourth grade students, opted to run for the top position after her class' unit on U.S. politics, according to the Post. And although she reportedly ran a very serious campaign, she ultimately lost to her opponent — a fourth grade boy — by one vote. Her father had reportedly been documenting the election in a series of Facebook posts.

Clinton heard about Martha's election loss through those Facebook posts, according to CNN. When a mutual acquaintance alerted Clinton to Martha's story, the former presidential candidate reportedly opted to send her an encouraging note.

"The most important thing is that you fought for what you believed in, and that is always worth it," Clinton wrote in the letter. "As you continue to learn and grow in the years ahead, never stop standing up for what is right and seeking opportunities to be a leader, and know that I am cheering you on for a future of great success."

"It was really touching to know that Hillary Clinton herself sent me a letter," Martha told CNN over the weekend. "That doesn't happen every day." She also remarked that she was "really excited" to receive the letter.

Although Martha lost her bid for the presidency, she was still elected to be vice president, according to multiple roles. In that capacity she will, much like the real vice president, be tasked with meeting with the president, as well as breaking ties in her school's legislative branch, should they arise.

"As a father, my wife and I are thrilled because she does look up to the secretary," Martha's father, Albert Morales, told CNN. "We try to encourage her to learn as much about public figures as possible. It's just been really nice to see someone like the secretary take the time to actually write a little girl who lost an election by one vote, but got back up."

Clinton, of course, was the first woman candidate to ever have been nominated by a major U.S. political party. Her largely unexpected loss in 2016 amounted to a stunning defeat for someone who many expected to be the country's first woman president. But if the letter she wrote Martha is any indication, she doesn't seem to have given up hope in the next generation of female leaders.