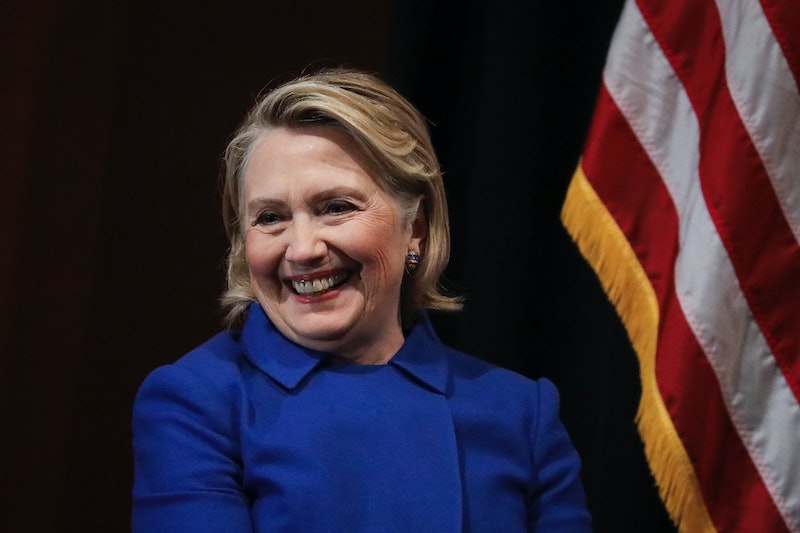 Last Friday, the president declared a national emergency in order to push through funds for a new wall on the U.S.-Mexico border. The decision has prompted swift backlash from Democrats, including his former opponent in the 2016 election. On Monday, Hillary Clinton shared a list of "real national emergencies" on Twitter, effectively taking a swipe at Donald Trump's decision to unilaterally push his agenda forward.

Her tweet was short and to the point, reading: "The real national emergencies: Relentless gun violence. Children separated from their families at the border. Climate change. Americans dying for lack of health care."

She did not specifically mention Trump by name, but her message seemed clear. Like many other critics, she appeared to take issue with the president's move to forcibly fund a border wall when there are so many other problems in the United States that could benefit from his immediate attention.

Ever since reports indicated that Trump planned to declare a national emergency, opponents have vocally and passionately stepped up to the plate to dispute whether such a move was necessary, or even legal. Among those critics were 2020 Democratic presidential contenders who plan to take on Trump when he runs for reelection.

"Every time a president declares a 'national emergency' in order to get his way on a particular issue, the closer we are to a dictatorship," Rep. Tulsi Gabbard tweeted on Thursday. "Who needs Congress or the people if the president can make the decision on issues by himself? Very dangerous precedent."

Others, like Sen. Cory Booker, suggested that the president's decision to declare a national emergency was politically motivated. And like Clinton, he indicated that he believed there were other ongoing problems that constituted "real emergencies."

"Trump’s inability to follow through on a campaign promise is not a national emergency," Booker tweeted. "Let’s not forget those still struggling to rebuild their lives after this administration failed to respond effectively to real emergencies in places like Puerto Rico."

But Trump's emergency declaration has been met with more than just verbal criticism. It is widely expected to face challenges in court, as well. One push, in particular, has been spearheaded by California Attorney General Xavier Becerra. In a joint statement with California Gov. Gavin Newsom on Thursday, the pair said they intended to take the administration to court if Trump did, indeed, declare the state of emergency.

"The President’s ‘national emergency’ is nothing more than a fabrication while real emergencies are awaiting his action," they said. "If the President tries to use a made-up emergency to pay for his border wall, then California will see him in court.”

On Sunday's episode of ABC's This Week, Becerra stood by their promise. “We are prepared,” Becerra said. “We knew something like this might happen, and with our sister state partners, we are ready to go.”

A lawsuit has not yet been announced. However, Becerra has said it is on its way.