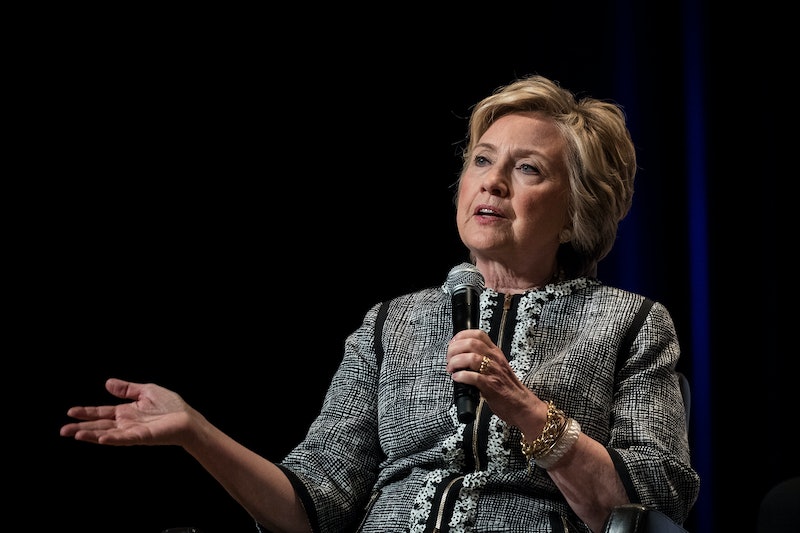 A group of high-profile Democrats traveled to Alabama this weekend to mark the anniversary of the 1965 "Bloody Sunday" Selma to Montgomery march. Among those in attendance was Hillary Clinton, whose Selma speech said democracy was in the middle of a "full-fledged crisis." The former presidential candidate delivered her remarks at the Martin and Coretta King Unity Breakfast, part of the annual Selma Bridge Crossing Jubilee, according to ABC News.

"This is a time, my friends, when fundamental rights, civic virtue, freedom of the press, the rule of law, truth, facts and reason are under assault," Clinton said during her speech, according to CNN. "And make no mistake, we are living through a full-fledged crisis in our democracy."

Clinton received the 2019 International Unity Award at the event. On their website, breakfast organizers bill the gathering as an opportunity to celebrate the diversity of the voting rights movement. On "Bloody Sunday," some 600 protesters were attacked by law enforcement on the Edmund Pettus Bridge. Police and other local figures used clubs and tear gas to force the marchers back into Selma.

Clinton, who lost her 2016 presidential bid to Donald Trump, did not mention the president, his administration, or Republicans by name, according to reports covering the event. Instead, she rallied listeners to action, asking them to consider the significance of their place in history.

"To anyone who has ever wondered what you would have done during those defining moments that we read about in history books — whether you would have risked arrest to demand votes for women or bled on the Edmund Pettus bridge to demand voting rights for all — the answer is what you are doing now could be as important as anything that anyone has done before," Clinton said.

During her speech, Clinton highlighted recent voting rights controversies in the United States, remarking that "we know candidates both black and white have lost their races because they have been deprived of the votes they otherwise would have gotten."

She pointed to the recent Georgia gubernatorial election and then-candidate Stacey Abrams, who lost her bid for the position last year. Clinton said that Abrams "should be [the] governor leading that state right now," according to ABC News.

The former secretary of state told attendees that there was a lot of work ahead for those concerned with protecting the right to vote.

"When racist and white supremacist views are lifted up in the media and the White House, when hard-fought-for civil rights are being stripped back, when the single most important fight of our time, which makes it possible to fight every other fight and must be, as Frederick Douglass would say, our North Star — the fight to protect our vote — is not gathering the momentum and the energy and the passion it deserves, we have a lot of work to do, don't we?"

Clinton's remarks largely pointed to carrying the fight for civil rights into the future. As has often been the case for her in the last two years, she offered words of encouragement and perseverance to those listening.