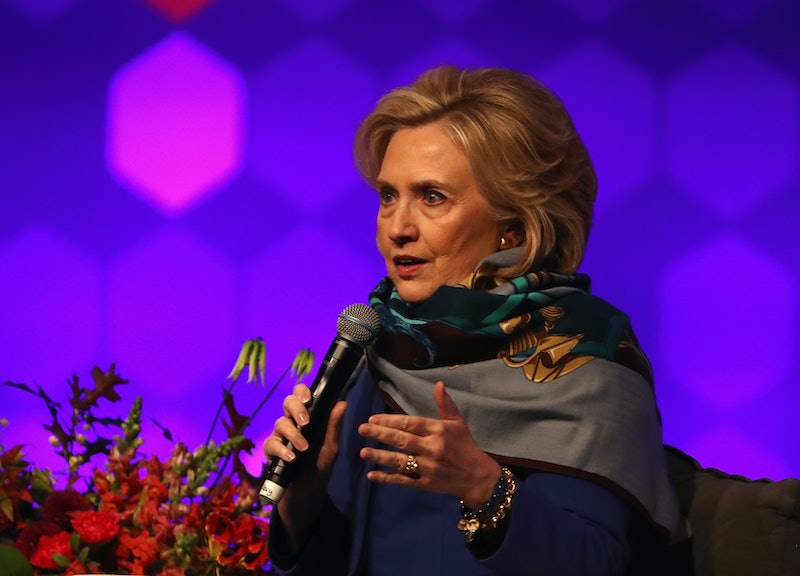 She's not mincing words on this. On Friday, former Secretary of State and Democratic presidential nominee Hillary Clinton weighed in on the Trump administration's hyper-controversial immigration policies, and she was blunt about it ― specifically, Clinton posted a tweetstorm on Trump's family separation policy for undocumented immigrants crossing the border, calling it "devastating to even imagine."

Clinton was the Democratic nominee in the 2016 presidential election, winning the popular vote by nearly three million but losing the electoral college, thus making Trump the president-elect of the United States. Since his inauguration (which she attended) she's picked her spots as far as wading back into national politics is concerned, occasionally speaking out on issues like gun violence on social media, or appearing and speaking at public events.

In this case, she tackled the Trump administration's policy of separating kids from their parents when undocumented families are caught crossing the border, in a series of tweets. It's a policy that's been widely denounced and condemned by progressives, activists, and pro-immigration advocacy organizations as cruel and inhumane, and it's been dominating national headlines for weeks.

Calling the policy "disastrous," Clinton commented that she felt "horrified and heartbroken" when she considered the human cost of the policy, which the Trump administration reportedly views as a deterrent to unauthorized immigration.

In eight tweets, Clinton broke down her view of the crisis, and encouraged people to get involved in the issue via Families Belong Together, an organization dedicated to combating and ending the separation of immigrant families.

"We now know that more than 700 kids were separated from their parents between October 2017 and April 2018. As a mother and a grandmother, it’s devastating to even imagine," Clinton tweeted on Friday afternoon. "Not only that - this administration built on their "zero tolerance" policy earlier this month. The result? Nearly 700 more kids were separated from their families in the first two weeks of the new program. Think about that. Hundreds of families torn apart in two weeks."

"It is now the official policy of the US government - a nation of immigrants - to separate children from their families. That is an absolute disgrace," Clinton continued. She then linked to the website for Families Belong Together, and shouting-out a number of other immigration and civil rights organizations like the ACLU, We Belong Together, United We Dream, Moms Rising, and Domestic Workers.

"There is no more important test of our country than the way we treat the most vulnerable among us, especially children," Clinton concluded. "We cannot turn away from what’s happening on our watch - we have to act."

For Trump's part, he's attempted to distance himself from the public fallout over the family separation policy, insisting it's the fault of Democrats. The facts in no way support this, however ― the unique policy that's currently being employed was devised by the Trump administration, in an effort to dissuade would-be undocumented immigrants from crossing the border with a deeply dire potential punishment if they're caught.

Clinton is far from alone in her condemnation of the policy, but as the most recent standard-bearer of the Democratic Party ― and someone who actually won more votes than her opponent did nationally ― her voice carries particular weight. Her former 2016 primary rival, Vermont senator Bernie Sanders, has also laid into the administration for breaking up families in recent weeks, calling it "heartless" and condemning the "cruelty" of his immigration policies.