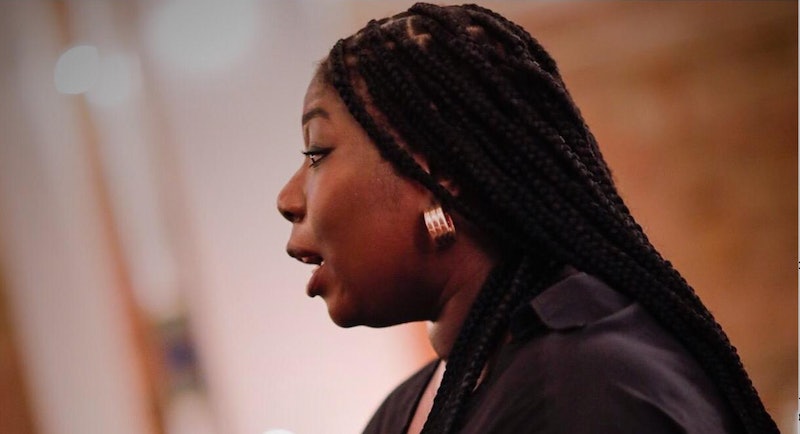 The Women’s Liberation Movement in the UK, as we know it, has long been historicised as a turning point for women in terms of contraception, reproductive rights, access to political positions and support for abused women. However, much has been left unsaid or downplayed when it comes to the Black Women’s Movement in Britain, much of which existed outside of the formally recognised movement. Historian Natalie Tomlinson identifies three main targets of Black feminist critique: “the (white) feminist movement, the racist British state, and patriarchal structures within migrant communities.”

In 1973, the Brixton Black Women’s Group was created. The organisation mobilised Black women to campaign against racism in education, police brutality, housing shortages, and the discriminatory practice of testing drugs, like the contraceptive Depo Provera, on Black women without warning them of the possible risks or side effects. OWAAD, initially known as The Organisation of Women of Africa and African Descent but later changed to The Organisation of Women of African and Asian Descent, was established in 1978 and ran until 1983, combatting issues around immigration, deportation and supporting the rights of all nations in the world for self-determination.

Alongside these organisations, there existed smaller and more localised groups such as the south-west London Mary Seacole Group, an offshoot of the Brixton Black Women’s Group, that provided a support network for single black mothers. Meanwhile, The West Indian Parents Action Group, based on Gresham Road in Brixton, aimed to support Black Caribbean children in the education sector where they were being criminalised. Despite the fact that working-class Black women activists were organising autonomously across the country, historically many of their stories are pushed into the margins.

“It wasn’t until I reached my fourth year [of an English and Spanish degree] that there was the option to focus on more Black histories,” Black feminist historian Jade Bentil tells me. “I did modules on African literature, postcolonial literature and Black resistance which all gave me the opportunity to focus on more Black radical histories but, as usual, Black women were never the ones centred in these histories, nor were they deemed radical historical actors with key contributions we should take note of.”

The first time Bentil heard about OWAAD was in 2014 when she attended an exhibition about Black women in Britain at Brixton's Black Cultural Archives in Brixton. “Going to that exhibition taught me so much. I was learning about Brixton Black Women’s Group, The Black Women’s movement, so many moments I didn’t know existed and they were all rooted in Brixton.” Having grown up in the south London area of Balham, Bentil remembers being distinctly shocked: “I had never in my life heard that this huge movement of Black feminists existed only in the 1980s in this country. That’s the moment that I decided I wanted to do a masters in race and resistance and use that degree to look at Black British women specifically.”

Though that exhibition visit acted as a catalyst for Bentil’s desire to examine Black women's activism and communities further, she believes her parents and grandparents experiences in the UK have played the biggest part in forging her understanding of herself and her Blackness. “My maternal grandparents came from Ghana to London in the late 1950s and my mum was born here. I think the experience of being a second-generation African woman in Britain has really shaped a lot of my work and perspective, especially as I think it’s a positionality that isn’t always focused on when we talk about Black experiences in Britain; I do think there’s a particular account of Black migration to Britain that doesn’t allow for so many different forms of different communities that exist outside of these dominant narratives,” she says.

Bentil believes that growing up in south London, surrounded by so many different Black communities, was instrumental to her politicisation: “When my grandparents moved to Tooting Bec, they lived on a road that had lots of Black immigrants on it. Two of my grandma’s best friends lived on that road for 40 years and one of them is my mum’s godmother and her daughter is my godmother which really just demonstrated the kind of friendships and wider support Black women were providing for each other.”

Understanding what this kind of community and support looks like and how it informs activism and political theory has been a running thread through Bentil’s academic work. Her masters dissertation looked at the Black Women’s Movement from 1978 to 1988 within the context of Thatcher’s Britain, with explorations of “the ways in which Black women are positioned outside the boundaries of what is considered to be the nation and then, in times of crisis, Black women are called upon to save the nation.” It also included interviews with founding member of the British Black Women’s Group, Beverley Bryan and founding member of OWAAD, Stella Dadzie.

Now with her PhD, she’s expanding that first project to explore Black women’s activism from 1968 to 1988, looking at ideas and theories of anti-imperialism within the movement because “it’s a particular radical dimension of Black women’s activism which is always erased, even within the limited work that has been done.” She notes OWAAD, for example, prioritised understanding the way that African and Asian countries had been colonised and neo-colonised. They actively made links with Black women around the world whose work revolved around charting the way the UK and US have shaped the lives of Black people in those countries. She adds: “When I think about anti-imperialism for Black women activists, I think about how they weren’t trying to be a national group in Britain because it always had a larger scope than that. For someone to belong to a national, “imagined” group or community, someone else has to be kept out and positioned as “other”, usually through violent means. They were actually saying that we’re going to have a global vision of liberation and Black womanhood and we’re going to use this position in Britain as a way to think about anti-imperialism, rather than investing in the myth of Britishness.”

What’s crucial to Bentil as she traces these histories, however, is ensuring that she doesn’t make these radical Black women actors infallible. This is because, as with all movements, there are different ways that people within that same movement can be silenced, as could be seen with Black lesbians within the Black Women’s Movement. “This has historically proven to be a huge point of contention,” the south Londoner tells me. “I interviewed both heterosexual Black women and Black lesbians and what was interesting to me was the different ways in which they’ve remembered this history.” She believes that there were many ways that Black lesbian activists were silenced and as a result, has consciously tried to centre their voices in terms of what they remembered and the ways that even liberatory spaces can be exclusive. “Black lesbians were very much pushed to the sidelines. They were told “This isn’t the time for you to speak up, we’ve got more pressing issues, even though their lives were on the line.”

My grandma is basically a historian. She can narrate her life better than any academic can.

For Bentil, it’s important to recover these different histories and critique the movement so that a mystical perfection doesn’t emerge. “Let’s contend in the here and now with the ways this movement could also be exclusionary,” she says. “How do we now actually confront that violence and care for people who were on the receiving end of it? It’s an exercise of truth-telling, being introspective about Black women’s history and not trying to infuse it with this untouchable perfection that didn’t actually exist.”

This interrogation and unpacking of our history as Black women in Britain has led Bentil to work on what has become a personal project, soon to be a book entitled REBEL CITIZEN which will be published by Penguin Press in 2021. “While in conversation with my doctoral work, it’s a completely different project. It’s about Black women who migrated to Britain in the mid 20th century.” Her first interviewee was none other than her grandmother who would often tell her rich stories about her life and her first recollections of coming off a boat into Liverpool in the 1950s.

“My grandma is basically a historian; she can narrate her life better than any academic can. I sat down and talked with her about her life and came away completely astounded because even having grown up with her and having a close relationship with her, there were things I’d never heard of before. If my grandma was having these recollections, it makes me wonder about the memories Black women in Britain are living with every day. Are we taking the time to sit down and ask them about their lives? Are we respecting them as authorities to this history?”

What’s crucial to Bentil and REBEL CITIZEN is capturing the ‘everyday Black women’ whose narratives have often been erased. “We’re talking about Black women who were not positioned as exceptional in white society, who were radical actors and had these dreams and imaginations, who experience romance, who lived their lives outside of the scripts of heteropatriarchy, whose names we never call upon when we try to think through that history.”

Her ongoing efforts to understand this intimate history sees Bentil sitting at tables with grandmothers, mothers, aunties, and community elders who have created Black social life in Britain as we experience it today and simply asking them to narrate their lives. She continues: “I want us to get to know these women as well as we can throughout this book and sit with their stories. Hear about their stories of falling in love alongside their stories of motherhood. I want us to reckon with both the beauty and pathos of Black women’s lives in Britain.” Ultimately, Bentil is seeking to treat their stories with care and challenge the ways that Black women’s histories are often flattened and reduced in order to adhere to the official historical narrative.

“I want to reckon with the complexities of their personhoods and tell a story that is imperfect, neither a complete celebration but neither a complete tragedy. I want us to look at what happens when these two things co-exist, which is the definition of Black women’s lives.”