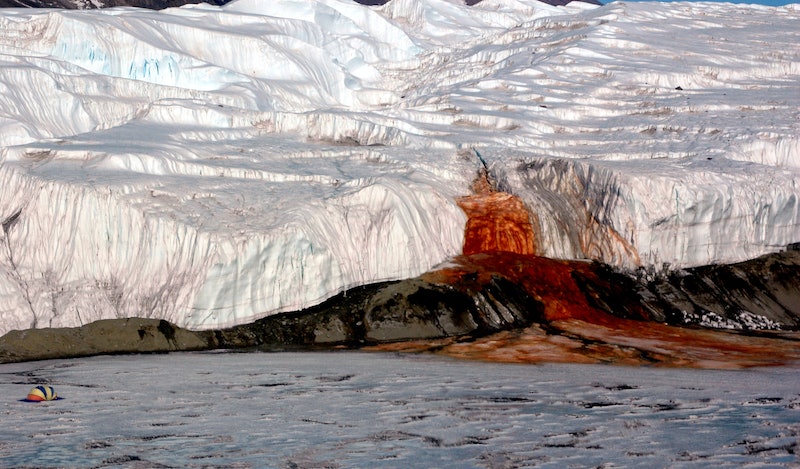 Sometimes the real world is far more macabre than anything our imaginations could come up with. Case in point: The Antarctic glacier that appears to be oozing blood — or at least something that looks eerily like it. Ever since it was discovered, the history of Blood Falls is defined by scientists trying to figure out why the heck Taylor Glacier looks like it has a nasty paper cut. Finally, researchers think they have an idea, but knowing the solution doesn't make the mystery itself any less interesting.

Blood Falls was first discovered (by someone who lived to tell the tale, at least) in 1911, during an expedition led by Australian explorer Thomas Griffith Taylor. The glacier itself had already been noted during the British National Arctic Expedition several years before, but at the time, it was thought to be part of the Ferrar Glacier. Taylor's expedition, however, found that there were actually two separate glaciers joined together, so explorers named the new one after their leader. Later, during that same expedition, the team discovered that the glacier seemed to be bleeding, with rust-colored water seeping from its snout. Needless to say, scientists began doing what they do best: trying to explain nature's unseemly bits.

At first, scientists attributed the waterfall's hue to algae. After all, that's what causes the red tide, and certain types of algae can live in snow — some are even known to turn the snow red.

However, the evidence began to point to a different explanation. In 2009, geomicrobiologist Jill Mikucki published a paper suggesting that the waterfall owes its color to high levels of iron, which oxidizes and turns red when it hits the air. At the time, the main flaw in this theory was that this reservoir was too deep for scientists to actually locate, but they were able to collect and test its outflow. On top of high iron levels, researchers found ancient bacteria in the high-salt, low-oxygen water, indicating that the waterfall stems from a lake underneath the glacier.

Six years later, in 2015, Mikucki wrote a paper providing further evidence that the source of the water had to be beneath the glacier, and she speculated to the Washington Post about the potential for an "extensive subsurface ecosystem" within the glacier. With that, we're brought to the modern day.

In April, researchers published a paper in the Journal of Glaciology. In the study described, they used radio echoes to map the inside of the Taylor Glacier, eventually gathering enough information to create a map of the many caves and rivers underneath its surface — Mikucki's speculations appear to be correct.

Using this imaging technique, they were able to trace the water from Blood Falls back to its source: a salty, iron-rich lake trapped beneath the glacier for approximately one million years. Unlike the surrounding ice, the water has such a high salinity that it doesn't freeze despite the extremely low temperature. The brine from this lake flows through crevasses throughout the glacier, and these iron-rich rivers eventually end in Blood Falls.

It looks like the mystery of Blood Fall's source has finally been put to rest. The conclusion? The waterfall is, indeed, metal AF. Literally.