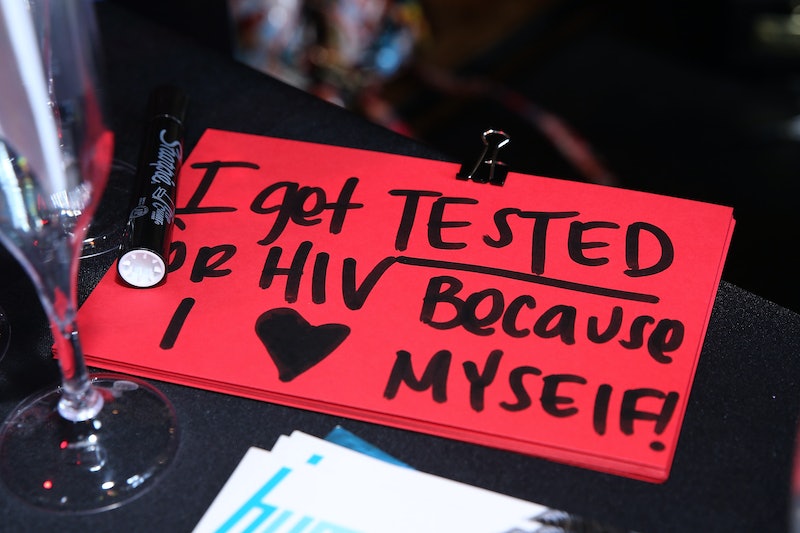 If you didn’t know, Dec. 1 is World AIDS Day — a global health day, created in 1988, that aims to empower people living with HIV/AIDS, remember those who were lost to disease, and raise awareness about the disease. When some people think of HIV and AIDS, they may picture it as an issue of the past — an epidemic that began in the '80s, quickly spread to every continent, and started a worldwide health crisis that many countries, like the United States, did not know how to proactively address. As HIV/AIDS medicine and treatment options have gotten better throughout the '90s and 2000s, the disease has somewhat faded from the public eye — but the disease still affects millions of people worldwide, and lingering stigma has dangerous, global consequences.

At the end of 2016, UNAIDS reported over 36.7 million people were living with HIV globally. And, according to the World Health Organization, 35 million people have died from the disease since it was discovered; 1 million people died from HIV/AIDS in 2016 alone. Like with any disability, HIV/AIDS is shrouded by myths and harmful stigmas. And unfortunately, because the diagnosis is spread mainly through sexual intercourse and clinically considered a STI, there are even more misconceptions. Despite HIV/AIDS being a commonly-known illness, the stigmas surrounding it persist, and they have dangerous consequences for HIV positive people.

Carl Baloney, the Director of Government Affairs for AIDS United, tells Bustle that stigma not only affects people's day-to-day lives, but also has consequences on a global scale. “Stigma and bias are major hindrances to progress in HIV policy and advocacy, prevention, and treatment,” he says. “Be it direct HIV stigma around misconceptions of how the virus is actually transmitted, misconceptions that people living with HIV are somehow ‘dangerous or unclean,’ or indirect stigma related to sexual identity (actual or perceived) that may deter individuals to seek out testing or treatment.”

In a 2013 perspective published in the Journal of the International AIDS Society, Michel Sidibé, the Executive Director of UNAIDS, called for “global action” to be taken to reduce discrimination towards HIV positive people. Sidibé explained stigma "continues to endanger people living with the virus, and it still prevents millions of people from coming forward for testing and for prevention and treatment services." It even keeps people from receiving life-saving treatments.

Dr. Olusegun Ishmael, the Founder and Chief Medical Officer of besafemeds, has witnessed firsthand the devastating consequences of HIV/AIDS stigmatization over the past twenty years. He tells Bustle that “people are afraid to get tested for STIs in general — they think what you don’t know can’t hurt you. Unfortunately, in this scenario, it can.” Dr. Ishmael adds that HIV/AIDS patients sometimes forego medical attention due to the exorbitant price tag of HIV treatment — which averages $14,000 to $20,000 annually in the United States without insurance. However, that average doesn't take into account any medical costs compiled from illnesses contracted because of the immune deficiency HIV/AIDS causes. Or, they are unwilling to seek medical care because they fear their health insurance will use the HIV/AIDS diagnosis against them in the future. Furthermore, the HIV/AIDS-focused organization Avert estimated one in eight people living with HIV and AIDS are denied medical care due to stigma and discrimination that surround the disease.

HIV positive women face unique challenges that make receiving proper health care difficult. Dr. Ishmael tells Bustle that “a lot of people still think [HIV/AIDS] is a ‘gay’ disease, male to male, therefore women’s issues are not discussed as much,” which he believes contributes, in part, to a lack of HIV/AIDS educational programs targeted towards women. According to the CDC, women account for only a quarter of new diagnoses in the United States, but Black women make up 60 percent of all American women diagnosed with HIV/AIDS. Because of this, Dr. Ishmael says HIV positive Black women are often stigmatized as “promiscuous,” and blamed for contracting HIV/AIDS — further preventing them from getting the medical help they need.

Baloney also stresses that trans women are disproportionately affected by HIV/AIDS stigma. Black trans women are particularly vulnerable to the disease, making up over half of all HIV diagnoses among trans women in the United States. “By many accounts stigma can often lead to violence, particularly among trans women. While there is a dearth of data on the trans experience — likely the result of systemic stigma that leads policymakers to not focusing on the lives of trans individuals — we do know that in 2016 at least 23 deaths of transgender people in the U.S. were due to fatal violence, the most ever recorded,” explains Baloney. “Sadly, in 2017, that number stands at 27 trans individuals killed in violent encounters. Considering the fact that trans women face a disproportionate burden of the HIV the likely correlation between stigma surrounding HIV status, trans experience, and violence can’t be ignored.”

Ending the stigma against people with HIV/AIDS may seem like a lofty task, but there are practical, scientific steps our society can take. A 2016 report that was compiled by the National Aids Trust (NAT) showed that stigma was actively reduced around the globe through providing education, workshop-based learning, and mental health counseling to communities disproportionately affected by HIV and AIDS. Moreover, structural change and advocating for public policies that protect people with HIV/AIDS is paramount. “In light of the numerous actions to undermine the ACA, Medicaid, and safety net programs, it is critical that citizens tell there members of congress to protect the care that they depend on for their lives,” Baloney tells Bustle. Specifically, he encourages readers to ask their congressmen about funding programs like the Ryan White Care Act, the Housing Opportunities for Persons with AIDS program (HOPWA), and any prevention or intervention programs within the CDC.

Breaking down stigma begins at an individual level, by changing our own attitudes towards HIV/AIDS-affected communities and tabling ableist beliefs. Davina Conner, a HIV/AIDS advocate who founded the Poz Haven Foundation, works to do just that: She hosts the radio show called Pozitively Dee, where HIV positive people from across the globe can call in to openly discuss the stigmas, adversity, and HIV specific issues they cope with on a daily basis. Conner tells Bustle she became an advocate after being diagnosed because she wanted to “put a face to the HIV virus, especially for the Black community.” Sometimes, ending harmful myths start with simply humanizing disabled people or people with pre-existing conditions. “I want people who are HIV negative to understand that those who are diagnosed with HIV are not a ‘danger,’” says Conner. “We are not infectious to just anyone, we are living healthy lives, and having babies — that are not diagnosed with HIV.”

Connor also tells Bustle she wants HIV positive people to know they are “not alone,” and taking care of your mental and physical health is the most important act of self-love when living with this diagnosis. She adds that it’s okay to not want to share your story or HIV status, but says, “Sharing our stories does help society know that living with HIV can be managed.”

The conversation about stigma should not end on World AIDS Day, but should instead encourage you to challenge the myths may you have heard or previously believed about HIV/AIDS. Ending the stigma is not just about making the world a better place for HIV positive people: it is, in some cases, a matter of life or death.

More like this
The 19 Best Tweets & Memes About Bisexual Awareness Week
By Lexi Inks
This Psychological Effect Might Be Keeping You From Hitting Your Goals
By Lexi Inks
An Honest Review of MeUndies Boxers, According To A Non-Binary Person
By Megan Lasher
Pro Footballer Zander Murray Is "Blown Away" By Support After Coming Out
By Sam Ramsden
Get Even More From Bustle — Sign Up For The Newsletter