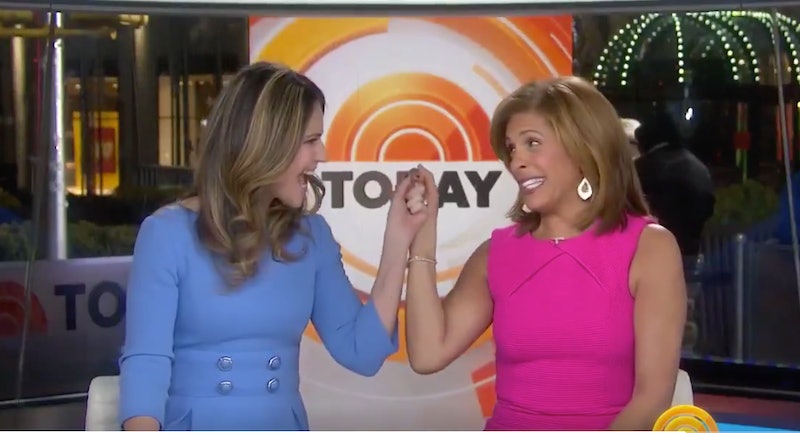 For the first time in its history, TODAY will feature two women as its mainstay co-hosts. NBC announced Tuesday that Savannah Guthrie and Hoda Kotb will be hosting TODAY on a permanent basis for the famed morning show.

The need for a co-host replacement was prompted by the firing of Matt Lauer. The former TODAY host faced multiple allegations of sexual misconduct in the workplace, the first of which was made public on Nov. 29. Lauer apologized for the "damage and disappointment" of his actions, saying that while "some" of what was said about him was "untrue or mischaracterized," there was "enough truth in these stories to make me feel embarrassed and ashamed."

NBC's interest in how its host lineup performs is understandable: TODAY scores well in morning show ratings, which makes it a money-maker for the network.

And Kotb has shown she can hold her own — she appeared alongside Guthrie for their emotional announcement of Lauer's departure, a segment notable for its honesty and candidness. Since then, Kotb has filled in as a temporary co-host while NBC decided on a permanent replacement for Lauer.

Kotb ended up being the network's choice, a decision that seems to have delighted Guthrie in their segment announcement.

This has to be the most popular decision NBC News has ever made, and I am so thrilled!

Kotb echoes that enthusiasm. In an upcoming cover story for PEOPLE magazine, she gushed about the warm relationship the two women share.

We're sort of like sisters, and everybody wants a sister.

In an email to NBC staff, chairman Andy Lack praised Kotb for her smooth transition as temporary co-host with Guthrie. He called the two women's connection "undeniable," continuing:

Hoda is, in a word, remarkable. She has the rare ability to share authentic and heartfelt moments in even the most difficult news circumstances. It's a tribute to her wide range and her innate curiosity.

This will hardly be Kotb's first gig at NBC. She began with the network in 1998 as a Dateline correspondent, and has been the co-host of TODAY's fourth hour alongside Kathie Lee Gifford since 2008 (Kotb will continue with Gifford in that time-slot).

Gifford and Kotb's final hour-long segment of TODAY has sometimes been referred to as the show's "Happy Hour." The two women have made day-drinking — or at least the appearance therof — their daily routine, with goblet-size wine glasses and cocktails a regular fixture. Few TV personalities seem to have as much fun.

The fallout from Lauer's departure was impossible to predict. Prior to being fired, Lauer was widely reported to be the highest-paid television host on air. Reports put his salary somewhere between $20 and $25 million a year before NBC let him go. That gargantuan payday reflects the estimated value a household name like Lauer reaped back in ratings.

But since his abrupt dismissal, TODAY hasn't yet suffered in viewer numbers. In fact, the week of Lauer's departure marked a rare one for TODAY — it beat out main rival Good Morning America for total viewer numbers. And TODAY continued to best GMA for the following weeks as well, which seems to suggest perhaps Lauer may not have been the one bringing the viewers in the first place.

TODAY also isn't the only morning show to drop a male host following allegations of sexual misconduct. CBS let Charlie Rose go from CBS This Morning after multiple women came forward with stories of sexual harassment. Rose apologized for his actions, but did not necessarily admit guilt.

If the past few weeks are any preview of the future, Kotb and Guthrie will be a morning show powerhouse duo. For Kotb and her many fans, today is a great day for TODAY.

More like this
What’s New On Netflix: A Victoria Justice Rom-Com & The Return Of David Letterman
By Arya Roshanian
What’s New On Netflix: The Return Of 'Bling Empire' & A Rebel Wilson Comedy
By Arya Roshanian
'Unforgotten's Brand New Character Joins At A Pivotal Moment For S5
By Bustle UK
Pete Davidson Mentioned Kanye West & Ariana Grande In His Last 'SNL' Sketch
By Grace Wehniainen
Get Even More From Bustle — Sign Up For The Newsletter