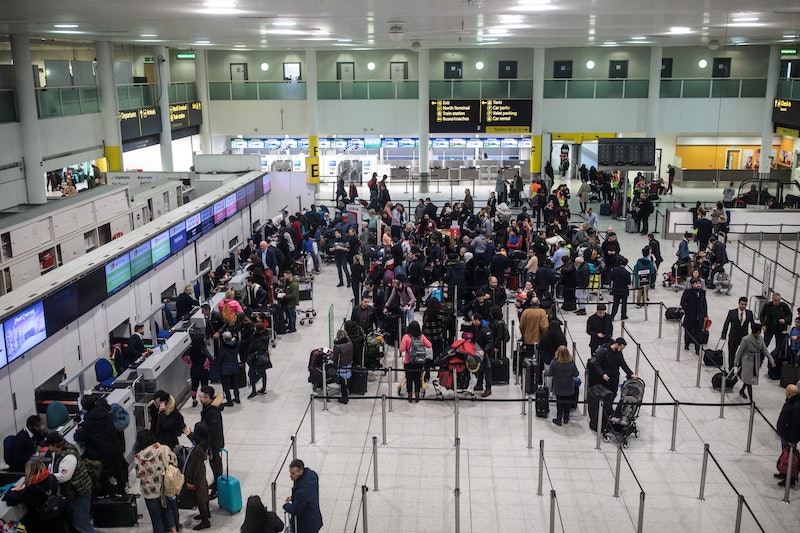 A heavy winter storm hit the Midwest late Wednesday night, causing quite a mess for travelers trying to get home after Christmas. ABC reports that holiday flight delays are impacting thousands of travel plans this season, due to severe rain, snow, and even tornado alerts.

So far more than 2,300 flights have been delayed and more than 500 have been canceled across the country, according to Reuters. This comes in a year with record-high numbers of air travelers — ABC News reported that U.S. carriers expected 2.78 million passengers on Wednesday by itself. At Dallas-Fort Worth International Airport alone, Reuters reported some 320 flights have been canceled.

One frustrated traveler trying to get to Los Angeles told the Fort Worth Star-Telegram she had been stranded between flights for nearly 24 hours, including a three-and-a-half hour wait in a plane on the tarmac. "Our Christmas vacation is ruined," she said.

Delta, United, and American Airlines also announced they would be waiving flight change fees for travelers landing in or passing through the northern plains states (Nebraska, the Dakotas, and Minnesota, primarily) on Wednesday and Thursday. Airport officials have been advising travelers to allow for plenty of time to go through airport procedures and to confirm their flight statuses ahead of time.

One flight traveling from Mexico into Texas experienced severe turbulence due to the storm conditions, injuring one passenger and a crew member, Reuters reported. The plane was supposed to land in Dallas-Fort Worth, but was diverted to Austin where both individuals were treated in a hospital and released.

National Weather Service meteorologist Marc Chenard told Reuters that winter storm and blizzard warnings are already in effect over much the Midwest. "Travel is going to be very difficult across the areas under weather and blizzard warnings," Chenard said, adding that states like Kansas, Nebraska, the Dakotas, and Minnesota could expect as much as 10 inches of snow by Friday.

Heavy rain in the southeast is also putting states along the Sun Belt at risk of flash floods, reports ABC News. Parts of the southeast were also under a tornado warning Thursday morning. As a result, officials told the outlet, travelers should expect delays to continue into Friday.

Kansas Governor Jeff Colyer declared a state of emergency on Wednesday in response to the storm, which allows state resources to be used to help in recovery operations. "It is important to be prepared when we see a winter event like this approaching," Colyer said in a statement. "We hope that travelers will be wise by paying attention to weather alerts and not unnecessarily placing themselves in harm's way as the storm moves through."

Angee Morgan, deputy director of the state's emergency management division, added, "Kansans are urged to change or delay their travel plans in these areas until the storm moves through."