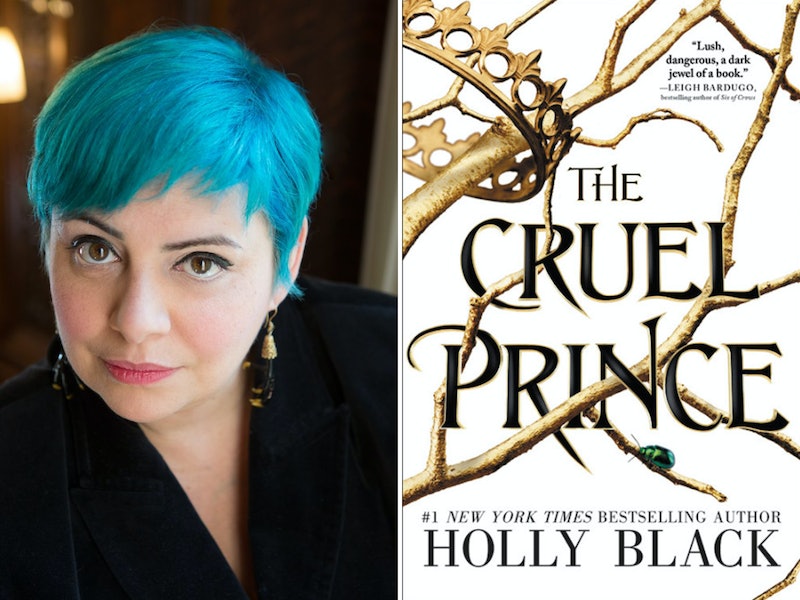 Every year when I travel home for the holidays, I pore over the books I accumulated in high school: The battered, dog-eared copies of Pride and Prejudice, the small stack of vampire novels (yes, I read and enjoyed Twilight as a teenager, but I fell hardest for Let the Right One In), and of course, the collection of young adult novels. When I returned to New York after this past Christmas, I brought one book back with me: Holly Black's debut novel Tithe, a gritty faerie fantasy. My copy has a torn cover and cracked spine — physical proof of the re-reads it endured throughout my high school years. I haven't had a chance to re-read it since bringing it back with me, but I did finish Holly Black's new book, The Cruel Prince. And I can honestly say I was as enraptured by her latest faerie novel as I was by her first.

Black's love for faeries has not abated in the 15 years since Tithe was published. Although she has written about other supernatural beings — like curse-workers and vampires — her heart has always been in Faerieland. (She even had her ears surgically altered to resemble elf ears.) The Cruel Prince is the first book in her brand new The Folk Of Air trilogy.

"I think of this as my making a commitment to sticking around [with faeries]," Holly Black tells Bustle. "It feels great to be back. I love telling these stories and I love trying to create a larger mythology that will tie together all my faerie books."

The Cruel Prince begins with a murder. Jude, Taryn, and Vivian are mortal sisters who are whisked into Faerieland after their parents are killed by a faerie general named Madoc. Due a complicated faerie morality system, Madoc, their parents' murderer, becomes their new caretaker. Ten years after this tragedy, the novel begins in earnest. Twins Jude and Taryn are firmly established — though not fully accepted — in their new world, and their sister, Vivian, has returned to the mortal world after a childhood spent in Faerieland. Jude, unlike her twin, is not content to simply exist in the world of faeries; she wants to thrive. She desires a spot at the High Court of Faerie, and in pursuit of this goal, she finds herself involved in a serious palace intrigue. As she attempts to decipher whom she can and cannot trust, she finds herself drawn into the inner circle of Prince Cardan, the youngest, wickedest son of the King.

That the novel takes place in a land ruled and populated by faeries is, perhaps, the least interesting part about it. The Cruel Prince is driven by the sparring personalities of its two main characters: Jude and Cardan. Jude, in particular, shows an unexpected maliciousness of spirit that seriously lights the fire of this novel.

"I started with the idea of a person who was brought up by the murderer of her parents," Black says. "I was interested in how that acclimated Jude to high-risk situations — primed her for them, even — because her whole childhood felt high-risk. And I was interested in the ways that she might become a lot more like the person who raised her than she would be at all comfortable with once she realized it. She’s grown up thinking of murder as one of the range of possible solutions to all interpersonal problems. That makes for interesting business."

"I’m not sure what it says about me that I don’t find it at all hard to get in Jude’s brain," Black adds. "I really love her, with all of her flaws and fears. She’s got a real talent for fighting and sneaking and strategy, but her greatest skill is that she can get under people’s skin and piss them off like no one’s business."

Jude's tendency to leave chaos in her wake earns her many enemies — and a few unexpected friends. But she cannot learn who is on her side until she figures out what side she's on. As she grows more and more submerged in the political drama of the palace, she unearths secrets that lead her to question everything she thought she knew about faerieland, the King, his sons, and her own family.

The plot of The Cruel Prince is propulsive and thriller; think of it as a YA Game of Thrones but with more faeries and consensual teenage romance. For Black, writing a palace intrigue involved tons of research on both plotting (she recommends The Big Con: The Story of the Confidence Man by David Maurer) and her subject matter: faeries.

"I think the difficulty of palace intrigue in Faerie is that their magic is numinous and faeries themselves are inhuman, so things have to work enough like they would in our world to make sense, but be strange enough to feel authentically folkloric," she says. "That’s an enjoyable challenge."

The Cruel Prince succeeds on multiple levels: as the beginning of a coming-of-age arc, as a delightful enemies-to-lovers romance, and as a twisted story of cons, deceptions, spies, and murder. But everything hinges on the delightful and unsettling relatability of Jude, a character who struggles both to define herself as a person and define herself a mortal in a land of magic and excess.

"Ideally, I want to surprise and delight readers," Holly Black says. "But most of all, I want the reader to experience the terror and awe of being mortal in Faerie."