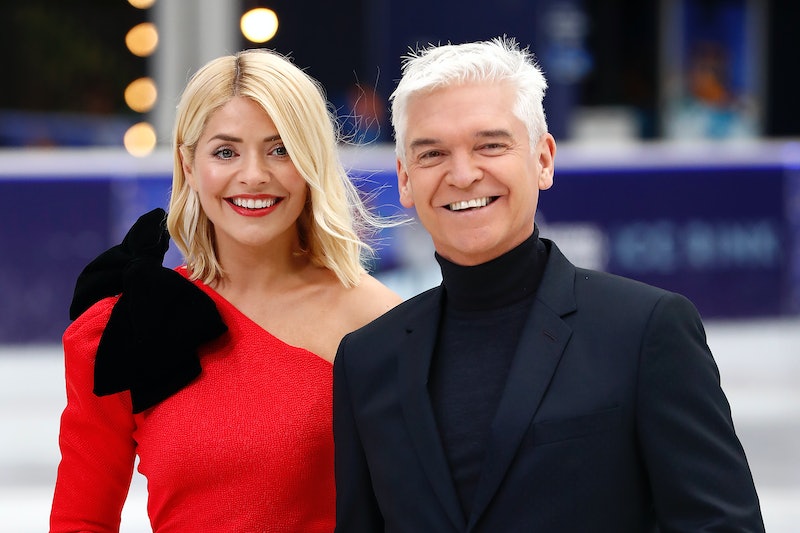 Watching your best friend do something absolutely iconic is one of the best feelings in the world. You don a Kris Jenner-esce persona and send them messages (and memes, can't forget the memes) to consistently make them aware of just how damn proud you are of them. It seems that the same goes for one of Britain's beloved presenting duos when it comes to their work outside of This Morning, so it's no surprise that Holly Willoughby nearly cried at Phillip Schofield's message of support during her time in the Australian jungle.

Presenting such a big — and beloved — show for the first time is a tad daunting, so it's no surprise that Willoughby had a large support network back in the UK, including her This Morning partner in crime. While viewers saw Schofield absolutely living for Willoughby's reactions to whatever the jungle decided to throw at her, he was also sending her messages of support.

Reunited at the Dancing on Ice launch this Tuesday (Dec. 18), Willoughby didn't reveal exactly what Schofield said to her, but it nearly made her cry, The Sun reports. "There was one message he sent me and I text him back and I said, 'I can't stop reading it!' — It was just the nicest, nicest message," she said. Turning to Phil, she continued: "You are a TV Jedi so it was nice to have you say those nice things, it was extra special. I was like, please stop being nice, you're going to make me cry!"

Even though Schofield revealed in watching Willoughby try to survive constant invasions of privacy courtesy of some nasty creep crawlies, he couldn't help but be overjoyed at watching her absolutely slay it as Donnelly's co-presenter. "It's been great for me, but man she was so brilliant and I was very proud, she just made me howl with laughter," he told the MailOnline.

"When Joe Swash came on This Morning and Holly had already taken off, Joe said 'I don't know if anyone's mentioned to her when you take the plastic heads off the bugs fall down. I waited the whole series for that moment!"

While this is the first time viewers will have seen Willoughby and Schofield back together again since her time in the jungle, the premiere of Dancing on Ice (Sunday, Jan. 6) will be their return to telly rather than on This Morning, which will air the following day. Rochelle Humes filled in Willoughby's presenting duties on the show, which came to an end last Friday (Dec. 14), with Eamonn Holmes and Ruth Langsford presenting the show on the run up to Christmas.

"By the time Holly comes back we're almost into Christmas and I think because she's been away for such a long time and she's a mum, she's got her Christmas to organise as well," Phillip explained on the show.

He continued: "So I think it's fairly sensible to say Rochelle is doing really well, she will do up until Christmas and Holly rejoins me in the New Year."

Fair dos, and since 2019 isn't that far away, viewers won't have that long to wait until Schofield and Willoughby return.