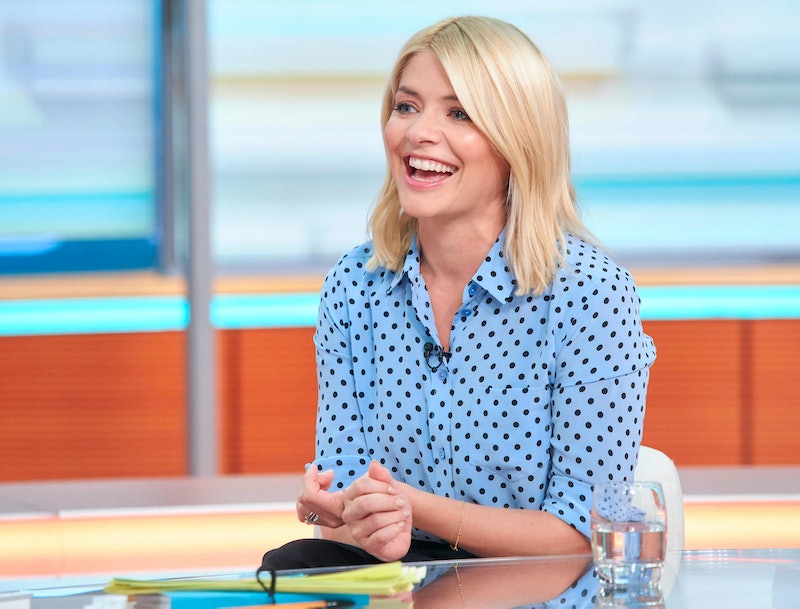 This'll be hard to believe, but 2019 marks Philip Schofield and Holly Willoughby's 10th anniversary of co-presenting This Morning. To celebrate this momentous occasion, they sat down with the Sunday Times to chat about their time on the show and a whole host of other subjects. While the two speaking of their friendship outside the show is absolutely adorable, Holly Willoughby's comments on online abuse and body image were the stand-out moments for me.

Willoughby is a strong advocate for mental health and feminism, and whenever topics such as misogyny or body image are brought up on the show or featured in debates, she is strongly vocal in her support for women's rights. From being shocked at the notion that wearing a short skirt somehow makes women more susceptible to be raped to the idea that sexual accusations have gone too far, Willoughby never backs down without making her support for women heard.

However, while the presenter has been vocal on Instagram regarding the #TimesUp movement and the hypocrisy she and other women faced when being photographed at the Brit Awards in February, she's much quieter about her own experiences with with online misogynistic abuse or trolling — and for an important reason.

"If there's any negativity coming in from anywhere, I don't want to be a part of it," she told the Sunday Times. "I know the kind of people that are doing it, and I'm not going to let it have oxygen."

Noting the way in which Willoughby was "charted forensically by the tabloids" last year regarding an apparent weight loss, the Sunday Times also asked whether there's a similar reason as to why the presenter has stayed quiet on the body image front as well. Willoughby responded: "Yes, I very deliberately don't talk about it. Just because I don't think it's helpful to the conversation, for women generally. As long as you are healthy and happy, that's really all that matters. It's a personal thing for me, and I think that people get obsessive with it."

"On this show I've sat across the sofa from mums and dads who've lost children to anorexia, or their children are currently going through it, and they sit there and say, 'It doesn't help that there's such a fascination with weight at the moment.' Everybody knows what leads to a healthy lifestyle, but it's not up to me to give you a blow-by-blow account of what I've eaten that day. It's not helpful, and it's not what's important."

What's important is supporting those who are dealing with the ramifications of issues such as body image, misogyny, and sexual assault. And it's through women like Willoughby that those who are affected by these issues are given a voice, which can lead to change.

More like this
Adele’s All-Female Lineup Includes Kacey Musgraves, Mahalia, & Self Esteem
By Shahed Ezaydi
Michael Owen Has Shared His Thoughts On Luca & Gemma
By Bustle UK
12 Crucial Casa Amor Predictions About Who Will – & Won’t – Stay Loyal, Babe
By Victoria Sanusi
Michael Bublé Fans Are Raging After They Missed His Gig Due To Traffic Jams
By El Hunt
Get The Very Best Of Bustle/UK