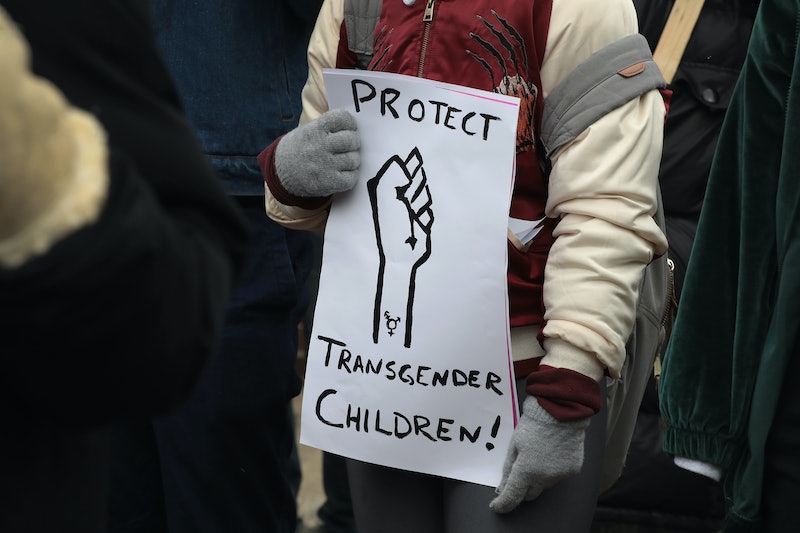 LGBTQ youth are a vulnerable population, and that discrimination plays out in a number of ways. One of the most commonly-cited statistics is that they comprise 40 percent of the homeless youth population, often as the result of family rejection — and according to new research from Loyola University and the University of Pennsylvania, this puts them at risk for equally pressing problem: human trafficking. After interviewing hundreds of homeless youth across the U.S. and Canada, researchers found that LGBTQ youth are disproportionately affected by sex trafficking, particularly if they're transgender. Despite certain legislative victories for LGBTQ rights over the past few years, the system of discrimination is still in place, leaving the community at risk for exploitation in ways that heterosexual individuals may not realize.

Aiming to get an idea of how many homeless youth had been victims of trafficking, Loyola researchers interviewed more than 900 young adults staying in Covenant House shelters in 12 cities. Disturbingly, nearly one fifth of those interviewed reported being trafficked in some way. The majority had been victims of sex trafficking, but seven percent had been forced into labor, and three percent were trafficked for both.

When the study broke down demographics, researchers found that homeless young women were more likely than men to be trafficked or engage in the sex trade. LGBT youth only comprised 19 percent of respondents, but they accounted for 34 percent of the sex trafficking victims and 32 percent of sex trade workers among those interviewed.

In another study, University of Pennsylvania researchers interviewed around 300 homeless youth, focusing on those who acknowledged they had been trafficked. According to their results, those with a history of childhood maltreatment were more likely to become trafficking victims; in contrast, those who reported the presence of a supportive adult in their lives were less likely. Like the Loyola study, the results indicated that LGBT youth are disproportionately likely to experience human trafficking: 39 percent of the sex trafficking victims identified as LGBTQ.

Without shelter or social support, homelessness leaves anyone at risk for trafficking, but by all accounts, LGBTQ youth are especially affected — not least because they make up such a high proportion of homeless young adults. Furthermore, traffickers prey on their victims' vulnerabilities, and once they've been trafficked, the stigma surrounding their sexuality or gender identity may be one of the factors preventing them from asking for help. "LGBTQ youth may fear the repercussions of reporting their situation, particularly if they worry others will mistreat or not believe them because of their gender identity or sexual orientation," writes the Polaris Project on its website.

Youth homelessness is a complicated problem, made more complicated when LGBTQ discrimination comes into play. According to the National Coalition for the Homeless, LGBTQ homeless individuals are at a higher risk for violence, and finding shelters that accept them is easier said than done. Although a growing number of queer-focused shelters are being created lately, it's clear that the problem of LGBTQ youth homelessness, and all the risks that come with it, won't be solved easily.