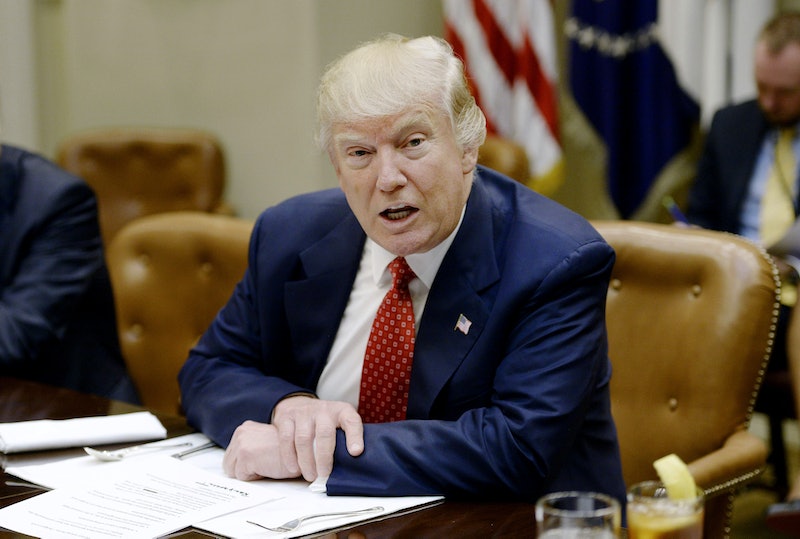 Donald Trump broke the news Saturday that he plans to skip the annual White House Correspondents Dinner, an odd and interesting event that brings the press and the president together to laugh at each other for a night before returning to their respective battle stations. As the first president to skip the event in nearly four decades, Trump's announcement is surprising, but not nearly as surprising as some people seemed to think. Realistically, Trump was never going to the White House Correspondents Dinner because it's a celebration of everything he hates about the media, and it'll be a better event without him.

Trump was never, ever going to set foot in the WHCD this year for several reasons. First of all, Trump can't take a joke to save his life — his incessant tweets about Saturday Night Live are definitive proof of that. Trump also has no sense of humor, as shown during his speech at last year's Al Smith Dinner. He can't help escalating every situation into a no holds barred fight for his reputation, which usually ends in him tearing down other people instead of actually making himself look better. It's not a good look on him and he knows it, so it makes a lot of sense that he would choose to skip the dinner. In that regard, the decision not to attend is almost respectable, because he's admitting a weakness and choosing to bow out rather than put everyone in a situation that's guaranteed to end badly.

However, you can't credit Trump for skipping the dinner because of the way that choice ultimately relates to his attitude toward the press. Trump has a long history of evasive and manipulative behavior when it comes to the media, cancelling and refusing to hold press conferences at various points throughout his campaign and presidency and banning certain outlets from attending. This is another chance for him to swerve fair and deserved criticism, and he's taking the easy way out instead of standing up to it.

He's not even admitting to his complex history with the press as a reason why he's deciding to skip the event two months in advance — he's acting like it's completely unrelated. "I will not be attending the White House Correspondents' Association Dinner this year. Please wish everyone well and have a great evening!" Trump said in the tweet announcing his scheduling decision. The refusal to address the interrelated problems here are another sign of Trump's delusion that nothing's wrong with his administration, making this decision another scary one that signals the erosion of a truly free American press.

Frankly, it would be really weird it Trump had agreed to attend the dinner. He has so consistently framed the press coverage of him as personal attacks that it would undermine those statements if he willingly went to their event. Other presidents, including President Obama, had strained relationships with the press, but were able to put them aside for the WHCD because they understood that the conflicts weren't about them personally. Trump has never demonstrated a clear understanding of the separation between himself and his politics, and has taken press commentary and criticism as "attacks" on both. He wouldn't sit there for a whole night getting "treated unfairly" by the press, and the whole thing will be funnier without him there anyway.

The White House Correspondents Dinner is one of the most idiosyncratic events in American politics, and it's not surprising that an equally but oppositely idiosyncratic president is choosing to skip it. Trump skipping the dinner at least spares America the pain of having to sit through his bad jokes, even if it's a foreboding sign that he intends to cut off further avenues of legitimate political critique. But this is Trump's decision, and therefore just a symptom of the times — everything should go back to normal in a few years. When there's a new, less megalomanic president, they will certainly be welcomed back to the dinner.