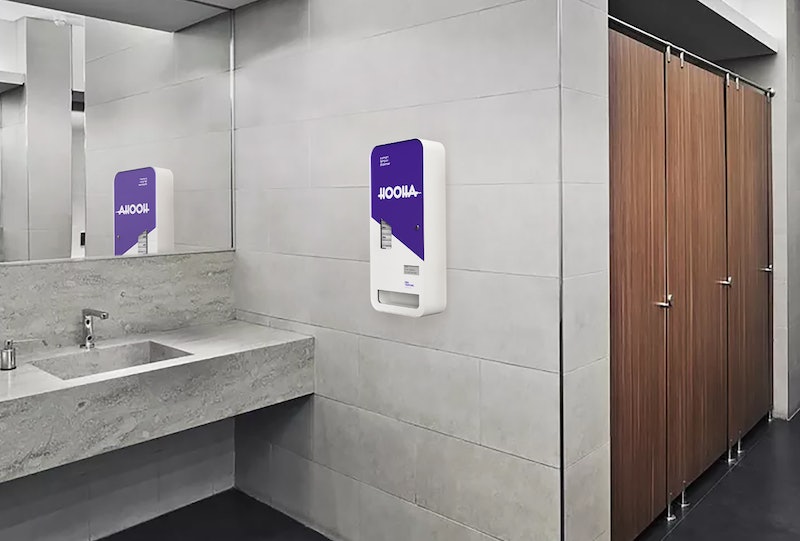 Have you ever walked into a public restroom, realized you needed a tampon, and then realized you were out of luck? Stephanie Loffredo, associate director of social media for the creative agency Huge, found herself in the same situation, which gave her the idea for Hooha, a machine that distributes free tampons whenever you need them. Just send a text message to the number on the machine, and your free tampon (yes, free) is dispensed. No need to carry around a drugstore in your purse — Hooha will be there for you.

“Hooha was made because I was frustrated with pad and tampon dispensers — the antiquated ones that are in public restrooms that are currently across the United States,” Loffredo tells Bustle. “They’re coin operated, they’re janky, they’re usually broken or unstocked […] I wanted to do something about it." Thanks to a fellowship program at Huge, she was able to incubate her idea and grow it into something tangible. Thus, Hooha was born.

“We have access to toilet paper and hand soap, and we expect all these things to be available to us in public restrooms, and at the same time, we don’t expect tampons to be available,” she says. “Tampons are a basic human need, in my mind.” Right now, Huge pays for the tampons, but in the future, Loffredo says, they'd love to partner with a major corporate supplier to bring the machines to life. "Right now, we stock Hooha with Tampax Pearl from P&G, but we’d love to figure out how to scale it and roll it out," she says.

Unsurprisingly, the men who worked with Loffredo on Hooha had no idea that being able to find a tampon (and not pay through the nose for it) was such a problem, Loffredo says. And the women on her team were resigned to the issue. “We live in a society where women look at a tampon dispenser in despair rather than in relief. It doesn’t faze women all that much because they know that the machines don’t work,” she says. Women are so used to being treated as second-class or other when it’s that time of the month that most have just given up.

The frustrations with finding tampons are not just individual — they're institutional. According to The New York Times, 36 states charge what’s colloquially known as a “tampon tax” on the menstrual products women can buy at any drugstore. These items are taxed because they, unlike shampoo, lip balm, or body lotion, are somehow not seen as a “necessary” item. Instead, tampons and pads are taxed as a luxury item. (For the record, toilet paper is taxed, too.) Lawmakers in two-thirds of the states that still charge the tampon tax had enacted legislation to abolish sales tax on menstrual products as of July 2018, but the truth still stands — if tampons are taxed, people who menstruate will pay more over the course of their lives because of a monthly need for menstrual products. It’s a sanitary issue, it’s a health issue, and it’s a quality of life issue, but according to HuffPo, over a third of men surveyed on the topic don’t see it that way.

In designing Hooha, Loffredo had firm ideas about its features, namely a window. “You’d be able to see the brand you’re getting inside the machine, and you’d know if it was stocked or not,” she says. There are also two sensors inside the machine — one lets facilities management know if stock is low, and the second ensures that a tampon is actually dispensed. No jammed machines here. Accessibility was also an issue, Loffredo says, explaining that most paid services have evolved from cash to electronic payment. The team decided that an app would be too cumbersome for people to download and use, but SMS text technology would work even on non-smart phones.

Of course, not every woman who will need a tampon has a phone. According to Global Citizen, young girls around the world miss 10 to 20 percent of school days because they can’t get adequate menstrual supplies. Homeless women frequently go without, too. Loffredo is transparent about the current abilities of her prototype, knowing that right now, it will not reach those without phones nor those not in areas with Hooha machines. Right now, there are 15 Hooha machines in beta testing. Loffredo and her team teamed up with The Female Quotient, an organization that supports women's equality, to provide a Hooha during SXSW in the FQ Lounge. Loffredo is currently looking for brands with which to partner, including a tampon distributor.

“Right now, there are a number of different organizations who provide menstrual products to women who may not be able to get them. As Hooha gets bigger, I would love to do something where we’re donating to women, as well,” she says. “We’re beta testing to get user feedback and optimize. We’re looking for partners.”

Hooha wants people who need a tampon to be able to get one, but they also want everyone to know that having a period is just a part of life. No one should be embarrassed about their period, and no girl should miss school because she’s on her monthly cycle. Loffredo is so passionate about destigmatizing periods that she's submitted a proposal to the Unicode Consortium — the body that decides on emoji — to launch a tampon emoji.

Though Hooha is currently just a prototype, Loffredo aims to make her one-two punch of period strength a marker to change the game when it comes to menstrual issues. “Public restrooms should provide tampons. Workplaces should provide tampons,” Loffredo says. “There’s no reason a woman needs to leave a place to go get tampons from outside. That is crazy to me, and it needs to change.”