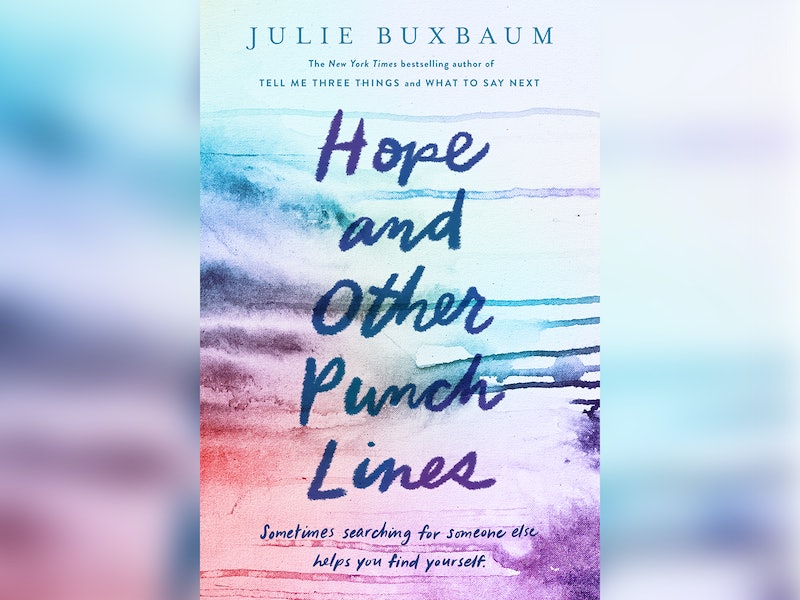 In Tell Me Three Things and What To Say Next, young adult novelist Julie Buxbaum wrote about first love, belonging, and finding a way to live through grief with remarkable insight and thoughtfulness. In her new book, Hope and Other Punchlines, she once again writes about loss, this time through the story of two teenagers whose lives were changed in very different ways by the terrorist attacks of September 11. The book doesn't hit bookstore until May 7, 2019, but Bustle has a exclusive first look.

Abbi Hope Goldstein is a teenager just like every other, with one notable exception: as a baby, she was captured in what became one of the most iconic images of September 11. In that photo, one-year-old Abbi (a.k.a. Baby Hope) wears a birthday crown and holds a red balloon as the South Tower collapses behind her. In the 15 years since, that photo — and Abbi — have become famous.

Desperate for anonymity, she decides to spend the summer before her seventeenth birthday as a camp counselor for kids at a day camp two towns away. But Noah Stern, a teenager whose entire life was also changed on September 11, has a similar plan. And when he recognizes Abbi as the girl from the picture, he's sure their meeting must be fate. Abbi isn't so sure, but they team up anyway to answer some difficult questions about the history of the Baby Hope photo.

If you can't wait until May to read the story of Abbi and Noah, you're in luck, because Bustle has a look at the cover and first two chapters below — start reading now.

'Hope And Other Punch Lines' by Julie Buxbaum

Tuesday, the least descriptive day of the week. Neither beginning nor end, not even the sad, saggy middle.

A beat, to breathe it in. All that blue.

When you let out your last clean breath, you look up.

And the world splits itself in two.

Even back in my fairy-tale days, I never liked those inevitable opening words—once upon a time. Their bookend—happily ever after—at least made sense to me. The main character ended up happy forever. That was a no-brainer and nonnegotiable, the absolute bare minimum we could expect from a good story.

The once upon a time, though? Let’s just say I had questions. What “time” were they talking about — Today? Yesterday? Tomorrow? — and what did it mean to be upon it? I was uncomfortable with its free-floating slipperiness. It felt like a cheap literary dodge.

I’ve long outgrown fairy tales, but I still have trouble with the concept of time. Maybe it’s because my own life has always been an exception to the rule: I lived once when I was supposed to die. And so this story, the one I’m telling you now, has two distinct beginnings.

There’s the one that starts with, and feel free to groan, a once upon a time. Or at least, it feels that way to me because I don’t remember it happening, and yet, once upon a time, a click of the camera changed the entire trajectory of my life. I know exactly the when: Tuesday, September 11, 2001, approximately 9:59 a.m. The morning of my first birthday. In the photograph, the one that turned me from Abbi Hope Goldstein into The Baby Hope, I’m being whisked away to safety by Connie Kramer, one of the women who worked at the day-care center in the World Trade Center complex. I’m wearing a paper crown and holding a red balloon, and behind me the first tower is collapsing. An AP photographer managed to capture the dust-filled moment, though I have no idea how.

Maybe it’s because my own life has always been an exception to the rule: I lived once when I was supposed to die.

You’ve probably seen the picture. It’s everywhere. You can find it hanging on living room walls and in dorms and nursing homes and museums and even printed on T-shirts and tote bags. I kid you not, I once saw baby me on a hat at Six Flags.

Like in an actual fairy tale, there are some sad parts to this story, which are an unfortunate narrative necessity. Let’s get those out of the way as quickly as possible.

Connie died seventy-five days ago. Her diagnosis was ovarian cancer. Stage IV. Which for reasons I don’t know — maybe because it’s serious — is written with Roman numerals.

She was only forty-six. XLVI.

In my house we all knew that Connie really died of 9/11 syndrome, the catchall diagnosis for the group of health problems caused by the exposure to toxic chemicals in the air at Ground Zero. For some survivors, it starts with inflammation of the lungs. For others, like Connie, it’s mutations and tumors, the assault of that day being retold on the cellular level.

On September 11, 2001, twenty-four thousand gallons of jet fuel blew up. Those of us there breathed in a chemical bouquet that included crystalline silica (which = bad), asbestos, carbon monoxide, hydrogen sulfide (or “sewer gas”), and God only knows what else.

No. We do know what else: human ash and human bone.

Hair and teeth and nails and dreams.

Before things get any more morbid, let me share an important bit of happily-ever-after. Not only did I survive on 9/11 (and get fifteen bonus years so far), but somehow, defying all statistical odds, so did my parents. My mom and dad both worked in One World Trade (the North Tower), on floors 101 and 105, respectively, when no one survived above the 91st floor. Ninety-five percent of the people in the company they worked for got wiped out. Had they been at their desks like they were supposed to be, I would be an orphan. Instead, when the planes hit, my parents were sipping their first-of-the-season pumpkin lattes three blocks away at a ground-floor Starbucks, which is the best advertisement for seasonal autumnal beverages I’ve ever heard.

In 2001, my parents went to fifty-three funerals in one month. They bought condolence cards in bulk from Costco. And then they went back for more.

We live in Oakville, New Jersey, which is the town outside New York City that had the highest number of 9/11 casualties, so the loss was everywhere: colleagues, neighbors, friends. Five kids from my class alone lost a parent on the same day, including my former best friend, Cat. Sixteen years later, Oakville High is this weird hybrid of those who don’t really care about September 11 and those whose whole lives were shaped by it. For the former, the event is just another chapter in our history books, like Pearl Harbor or the Vietnam War or landlines. For the latter, it’s forever part of our peripheral vision. We may not remember, but we can never forget.

In 2001, my parents went to fifty-three funerals in one month. They bought condolence cards in bulk from Costco.

That’s the first beginning, which I tell you only because otherwise the rest won’t make any sense. To meet Abbi Hope Goldstein is to meet Baby Hope, and to understand that in my town, at least, I get pointed at — people know my name even though we’ve never met — and occasionally, someone will corner me in a supermarket line while my hands are full of deodorant and hummus and tell me where they were that morning, like it’s something I want to know about them.

The absolute worst is when I make strangers cry.

But as promised, there’s a second beginning. Right here, right now, in a moment of rare triumph, the first days of summer vacation. Sunday night, nine p.m.: me, age sixteen, rocking out alone in my bedroom. I belt a girl-power ballad into a make-shift microphone, aka a dry shampoo bottle, because I can’t find my brush.

Tomorrow I start as a counselor for four-year-olds at Knight’s Day Camp, two towns away. When I visited for the interview, there were lush green lawns and an old-fashioned red barn and something they called the “plake,” which is a hybrid pool/lake. We’ll have pajama day and a bouncy castle water slide and Color War. Also arts and crafts and potato-sack races and even a Dance Dance Revolution activity block. Knight’s is a happy place, by far the happiest place I could find in the tri-state area, and believe me, I looked. Even went as far as to Google “happy places in New Jersey.” Now I get to go there eight hours a day five days a week, and for two months, not a single person will look at me and see Baby Hope.

Time is still confusing and slippery. Based on some unexpected medical developments, there’s a good chance I’m running out of it. But for the next blissful eight weeks, I am going to be just Abbi Goldstein.

I’ll get to make little kids laugh and not a single stranger cry.

It’s not like I’m going to burst into tears or drop my coffee or make a big scene or anything. I saw that happen at the Blue Cow Cafe last spring, and it was bananas. Abbi Goldstein, aka Baby Hope, walked in, and this middle-aged dude knocked over a full mug and started weeping right there in front of everyone.

We all have our wounds, especially in a town like Oakville. Mine are pretty gruesome. But I wanted to tell that guy to get it together. Find a coping mechanism. I abuse comedy the way other people abuse drugs, and that seems to works pretty well for me. He should try a Chris Rock special.

We all have our wounds, especially in a town like Oakville. Mine are pretty gruesome.

She’s a teenage girl, after all. Not the freaking Messiah. It’s not fair for him to put his shit on her.

At least, that’s what I used to think. Because when I see Abbi Goldstein across the field at Knight’s Day Camp, of all places, I’m not going to lie: I hear an actual click in my brain. As if all the pieces of a plan I’ve been working on for years but haven’t yet figured out how to implement suddenly fall into place. Yes I fully recognize my own hypocrisy, and I have surprisingly little trouble ignoring it. Not even a twinge of guilt.

This feels like fate, which to be clear is not a word I’d ordinarily use. That’s the domain of bad poetry and greeting cards and also, idiots.