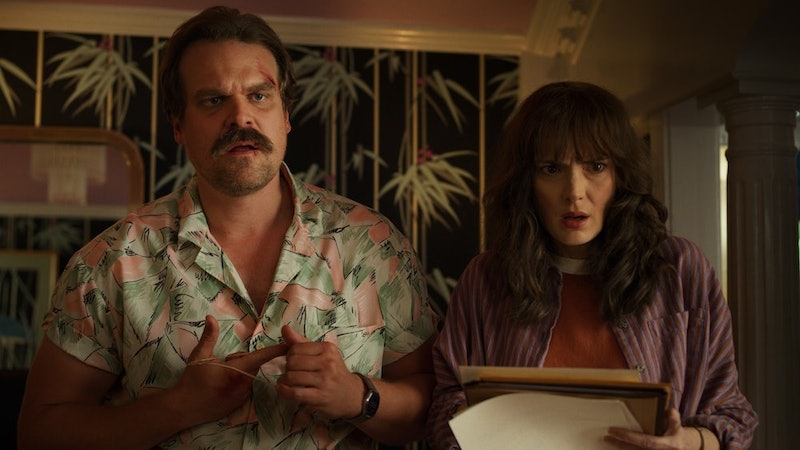 The Mind Flayer comes second on Jim Hopper’s list of concerns in Stranger Things, which returns for a third season on Netflix on July 4. According to the series creators, "Mileven" (Mike and Eleven) is definitely happening — and in turn, Hopper is in full dad mode in Stranger Things 3. In an exclusive preview for Entertainment Weekly, Stranger Things masterminds Ross and Matt Duffer teased that Mike and Eleven’s blossoming romance is “in full swing” now that Eleven is no longer a carefully-guarded secret — much to the dismay and “growing irritation of an overprotective Hopper,” who takes on the role of dad, according to Ross Duffer.

Ross' brother Matt teased of Hopper’s character arc as the dad of a teen, “Hopper is panicked about Eleven’s relationship with Mike,” he said. “How does he control the romantic whims of a teenage daughter? But his problems grow more serious as Joyce draws him into a new mystery…”

Is there a mystery greater than the minds (and hormones) of teenagers? In Hawkins, the answer is a definitive yes. But, the Shadow Monster will just have to wait, because while evil still lurks beneath the surface of the small, sleepy town, summer romances will apparently be a recurring theme when fans are reunited with their favorite group of teens in July. As it turns out, Mileven won’t be the only blooming romance. “When we meet Dustin this year, he has just returned from science camp,” Matt said. “And he may or may not have a brand-new girlfriend.”

A brand-new girlfriend for Dustin would definitely be a change of pace following the love triangle between Max and Lucas in Stranger Things 2. Max and Lucas, however, become an item after they share a kiss at the Snow Ball. According to Ross, the two are still very much growing strong in Season 3. In fact, Lucas even acts as relationship “counsel” for his friends. “Lucas is still dating Max and now considers himself quite the ladies man. When Mike has relationship problems with Eleven, Lucas provides ‘wise’ counsel,” Ross said. For Will, however, his friends’ new interest in girls over games will be a source of some conflict. Matt teased, “Will is excited for a summer of D&D campaigns. But his friends suddenly seem more interested in girls than games. Are they going to leave him behind?”

Romances are great and all, but the excitement over Eleven and Hopper’s new dynamic as father-daughter just might be more triumphant. Stranger Things 2 left off with our favorite cigarette-smoking, Upside Down-traversing police chief receiving official documents that bind Eleven (or Jane Hopper) as his kin. In the season, the two already showcased some stellar father-daughter dynamics while Hopper secretly kept Eleven safe in his grandfather’s cabin.

In an interview with The Hollywood Reporter in August 2018, actor David Harbour teased his character’s “inadequacies” as he takes on the role of a father once more in the show's newest installment. Harbour told THR,

“It’s fun to see Hopper having adopted Eleven. She's become legitimized in the society, in the world of Hawkins. And he's a father now. He's raising a teenage daughter, with all that that entails. So I think that can be pretty funny to see his inadequacies in all of this.”

According to Harbour, his role as a father on the series has changed him, too. “It calls on a lot of things that I don't have that much experience about. I don't have a child. Everyone's described this feeling to me — this love that they feel that's beyond them, where you would genuinely take a bullet for this person,” Harbour told THR. “I do find that Hopper changes me as I play him. And the Duffers are very keen observers of me. Initially, the characters were very much characters that we inhabited, and now they're there incorporating the things that we can do and they're writing for us.”

While it sounds like fans have a lot to look forward to with the budding romances of the Hawkins young heroes, there's no doubt that when the new installment premieres on July 4, your Twitter page is going to be filled with dad and daughter moments from Hopper and Eleven.

More like this
The Office Lego Set Includes All Your Favourite Dunder Mifflin Characters
By Sam Ramsden
'Stranger Things' Season 5 Will Echo Season 1 In A Key Way, The Duffer Brothers Confirm
By Kadin Burnett and Sophie McEvoy
‘Stranger Things’ Stan Megan Thee Stallion Grilled Natalia Dyer About Nancy & Steve
By Brad Witter
Here’s How 'House Of The Dragon' Diverges From The Book’s Timeline
By Allyson Johnson
Get Even More From Bustle — Sign Up For The Newsletter