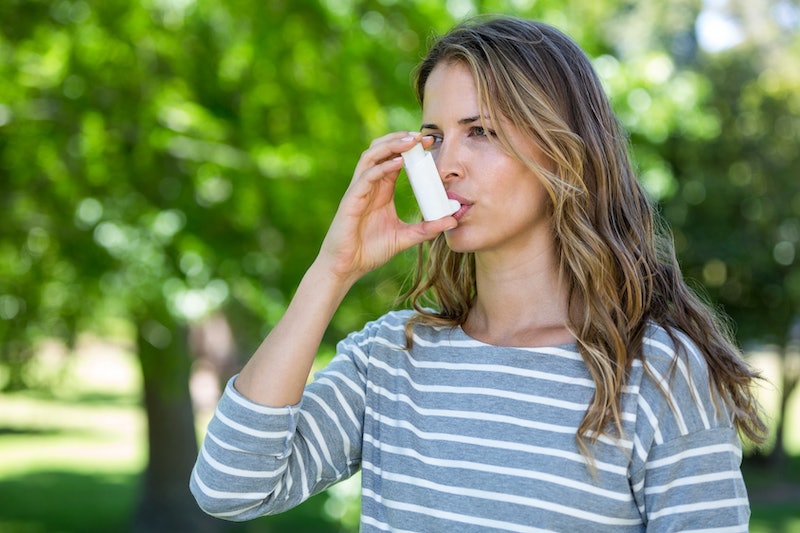 It's pretty commonly known among scientists, and among asthma sufferers themselves, that after puberty, women are more likely to have asthma than men — and thanks to new research published in Cell Reports about testosterone and the lungs, we might have a better understanding of why. Asthma, the condition in which airways are chronically inflamed over a long period, affects about one in 12 Americans, according to the American Academy of Allergy, Asthma & Immunology — but why do women make up a higher proportion of those numbers? For a long time, medical researchers have thought it had to do with hormones, and part of the proof for that theory lies in the way in which asthma shows up. Asthma rates are "highest in women with early menarche [first periods] or with multiple gestations," wrote scientists in a 2015 study, so "a role for sex hormones" in asthma seems pretty likely, because those two groups of women are exposed to sex hormones at high levels. But up until now, the puzzle as to how hormones interact with asthma problems has remained elusive.

This new science, however, suggests that having higher levels of testosterone in the body appears to help the immune response of the lungs, meaning they're less likely to be inflamed. The scientists were curious to figure out why the gender ratio in asthma was so extreme — before puberty boys are 1.5 times more likely to have asthma, but after puberty, that reverses — and thought it might have something to do with estrogen. But they found something else instead.

By looking at the lung cells of both humans and mice, they found that a particular kind of cell, called a group 2 innate lymphoid cell, or ILC2, tends to show up in much higher levels in female severe asthmatics compared to male asthmatics. We know that ILC2 cells have a strong role in allergies and other kinds of lung inflammation, because they produce proteins called cytokines, which trigger sensitivity in the airways. What we didn't know was that the body's levels of ILC2 appear to be affected by how much testosterone there is lying around.

When the scientists tried to find out whether women's sex hormones were affecting ILC2 cell levels by exposing the cells to estrogen and progesterone, they saw no real difference at all. But when they added testosterone, they saw something immediately: the more testosterone there was, the less ILC2 there was, and the less they produced cytokines. That means fewer asthma attacks and a better immune response.

This explains a bunch of things, including the cyclical nature of asthma in some women. We know from menstrual data that asthma attacks in women can be related to their periods. The period tracking app Clue notes that symptoms of asthma can increase during the pre-menstrual phase of your cycle. And this might be tied to the cycle of hormones during that week: as women enter the premenstrual or luteal phase, their levels of testosterone drop slightly, which may make them more vulnerable to asthma attacks. If you've been tracking the interactions between your asthma and periods and wondering why in the world you get asthma attacks right before your period, you might finally have an explanation.

This doesn't mean that estrogen and progesterone are irrelevant when it comes to asthma, however. Research done in 2013 highlights that estrogen in particular definitely seems to have a role in asthma, but that we still aren't quite sure how it works. While the ILC2 cells don't seem to react to estrogen at all, asthma and the immune system are complicated things, and there are probably other areas that are estrogen-sensitive. But this is a new big area of research that might help serious asthma sufferers in the future. And if you've got asthma now, this proves that it's important to discuss your menstrual cycle and your birth control with your doctor — because they're more relevant than we thought.

More like this
How To Protect Your Digital Privacy If You Need An Abortion Post Roe v. Wade
By Kaitlyn Wylde
5 Crystals For Anxiety
By Megan McCarty
5 Crystals To Manifest Better Sleep
By Megan McCarty
11 Benefits Of Cross-Training
By Carolyn Steber
Get Even More From Bustle — Sign Up For The Newsletter