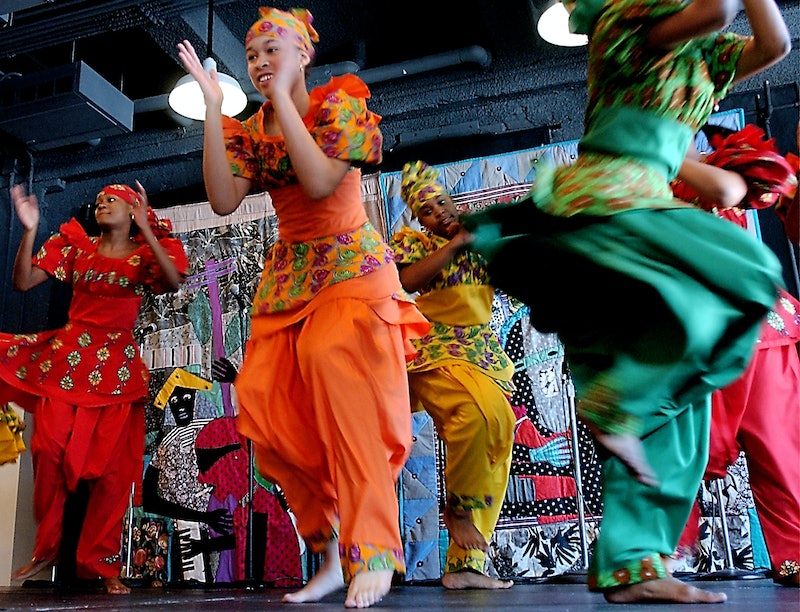 When we refer to winter holidays, we're talking about not just Christmas and Chanukah, but Kwanzaa, too. Kwanzaa is a week-long celebration focusing on family, community, and culture that was first observed in 1966. Fifty-one years later, millions of people celebrate the holiday in the United States and throughout the world as a means of restoring African culture in diaspora, according to the official Kwanzaa website. Some people think of Kwanzaa, also spelled Kwanza, as “Black Christmas,” but the two holidays are very different, and people have very different reasons for observing each. "I’m still gathering my identity as a Black woman, so celebrating Kwanzaa is a time for me to challenge how I contribute to my community, how I invest my time, and ultimately how I value myself," Erin, a 25-year-old engineer, tells Bustle. But not everyone views the holiday the same way.

The reasons why people choose to observe Kwanzaa (or not) show how the holiday has evolved in the half century since it was created. Some people don't celebrate Kwanzaa simply because they weren't exposed to the traditions as a child. "Honestly, I don’t know much about Kwanzaa. None of my immediate or extended family (all Black Americans) have ever celebrated it," Mickie, 21, who co-hosts the sex and dating podcast Who Do You Kink You Are? tells Bustle. But, she says, that doesn't mean she isn't interested in learning more.

Kwanzaa, unlike Christmas or Chanukah, isn't a religious holiday, but a cultural one. It starts on Dec. 26 and runs through Jan. 1 every year. Each day, those celebrating the holiday greet others by saying “Habari gani?” which is Swahili for “What’s the news?”. In response to the greeting, another person will answer with the principle of the day. The principles of Kwanzaa are celebrated in order each year and are: Umoja (unity), Kujichagulia (self-determination), Ujima (collective work and responsibility), Ujamaa (cooperative economics), Nia (purpose), Kuumba (creativity), and Imani (faith).

Dana, a 20-year-old retail associate, says that even though she doesn't currently celebrate Kwanzaa, she takes its message to heart. "Kwanzaa to me, represents unity and faith. I love what it stands for," she tells Bustle.

The celebration has grown over the decades to include songs and dances, storytelling, poetry readings, a large meal, and more. Kwanzaa is full of traditions and symbolism — but it's not for everyone. "My family doesn’t celebrate Kwanzaa, and I’ve never known a great deal about the tradition," Chandra, 20, tells Bustle. But, she says, pop culture and social media has exposed her to some of the Kwanzaa traditions. "Actually, the first time I saw what Kwanzaa celebrations looked like might have been on The Proud Family. I also never realized the tradition is so young (starting in 1966) until this year, thanks to Twitter."

Other women, like Rachael, 23, have only started to recognize the holiday as an adult. "In my adulthood, I find that I do not full out celebrate Kwanzaa, but I do take time to reflect every day on its principles," she says. "[On Dec. 27] we say Kujichagulia, which means self-determination. With my entire life in transition, I am holding on to Kwanzaa’s principles this year and hope to live them out in 2018."

Controversy surrounding the holiday's creator has deterred others from participating altogether. The creator of Kwanzaa, Maulana Ndabezitha (Ron) Karenga, was convicted of felonious assault and false imprisonment of one of his followers in 1971. (Karenga denied these allegations and claimed he was incarcerated for his political views, according to Ebony.) Mariah, the 25-year-old creator of Woman-ishh, a blog for Black women and femmes, says she practiced some Kwanzaa traditions as a part of her sorority, but tells Bustle she no longer celebrates Kwanzaa "in solidarity with the Black women" Karenga was convicted of allegedly assaulting.

Other people say they identify more closely with other traditions. Titilayo, the 23-year-old co-founder of NexxChair, a booking service for Atlanta-based makeup artists, tells Bustle, "[Kwanzaa] is not a part of any of the cultural traditions shared with me. We are Nigerian and Christian; we celebrate Christmas with big meals, family gathering, and gift exchange."

Black folks aren't a monolith — some celebrate Kwanzaa, and others don't. And the reasoning behind celebrating and not celebrating are all different and unique to the individual. These women's feelings toward Kwanzaa show how the holiday has taken on new meaning since its creation over 50 years ago.