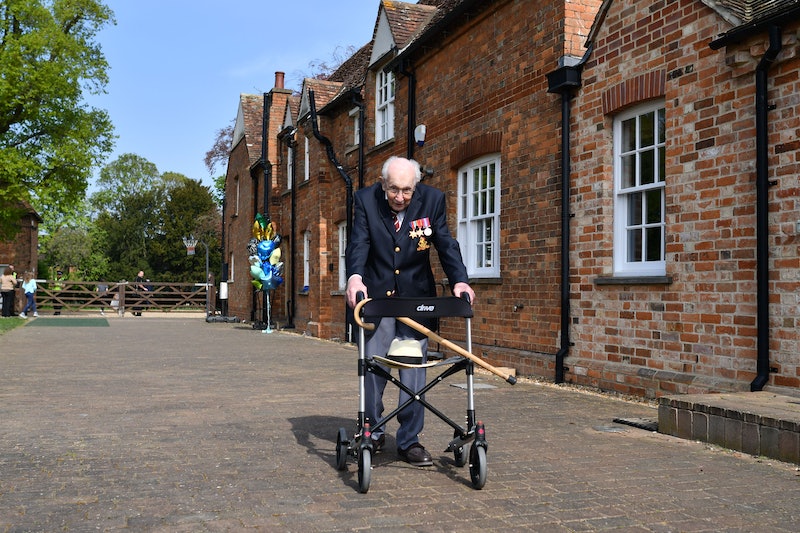 It's a difficult time to watch, read, or listen to the news and even if you don't, scary and negative information still manages to permeate your very being in this difficult time. Despite this, some stories are like rays of sunshine breaking through the clouds and the joyous story of a 99-year-old WWII veteran who wanted to help the NHS is just that. Captain Tom Moore finished his NHS fundraiser smashing his original target, raising a remarkable £14m. Here's your weepy warning, grab some tissues; this story is too much.

Moore, just shy of his 100th birthday, aimed to raise £1,000 for NHS Charities Together by completing 100 laps of his garden before his big birthday. Not only did he complete his mission weeks ahead of his centenary celebrations on April 30, but he did so smiling. Stop it, you're crying. I cannot deal.

The BBC reports that more than 650,000 people donated to his crowdfunding challenge, a number so large that it caused his JustGiving page to temporarily crash. He completed his final lap of the 25 meter garden dressed smartly, proudly wearing his war medals and flanked by a well deserved guard of honour.

The BBC news team were on hand to video him crossing the finish line and when asked how he felt, he said "I feel fine, I hope you're all feeling fine too."

He spoke to the BBC about the "absolutely fantastic sum of money" he raised, adding ahead of his final lap, "I never dreamt I would be involved in such an occasion as this."

The Metro reports that thousands of people have signed petitions saying that he deserves a knighthood for his good work and considering the life he's lived, it's been a long time coming.

Moore survived not only WWII but also cancer and a broken hip in his 99 years. He described the treatment he received for the latter two ailments on the NHS as "magnificent." Age is often accompanied by wisdom and considering he's lived through so much, what sage words does Moore have to impart during this strange time? "You've all got to remember that we will get through it in the end, it will all be right," he said. "For all those people finding it difficult at the moment, the sun will shine on you again and the clouds will go away."