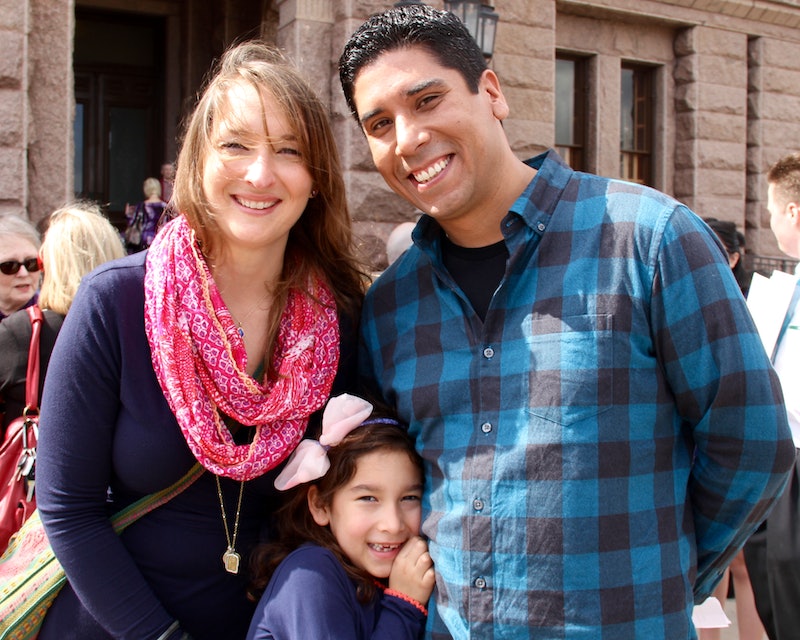 In a relatively short period of time, the transgender rights movement has experienced a historic roller coaster of successes and setbacks. In May 2016, President Barack Obama signed an executive order protecting transgender students' right to choose the bathroom of their gender identity. Less than a year later, the Trump administration rescinded those protections. And just last week, Texas Senate Bill 6 (SB6), which would require people to use the bathrooms and facilities corresponding to their birth certificate, passed. But in a striking display of LGBT support, hundreds gathered at the Texas Capitol protesting SB6.

While the protesters included a wide range of LGBT community members and allies, one of the youngest demonstrators quickly earned national attention. Libby Gonzales, who is transgender and seven years old, traveled with her parents, Rachel and Frank Gonzales, from their home in Dallas to the state capital.

In a phone interview with Bustle, Rachel Gonzales shared how important it is for families to band together in solidarity. "We're lucky in Dallas-Fort Worth to have an organization [through Equality Texas] that is strictly for families with trans children. I think we're up to 300 parents or so, so we're very geographically large area," she says. "It was awesome to have such a huge turn-out against the SB6 hearing," where Gonzales testfied.

It really feels like you are the only one going through this, until you connect with other families.

During our conversation, Gonzales shared that fighting anti-trans legislation is not the only reason it's crucial for families of trans children to unite. It's just as important for reminding their children and themselves that they're not alone and that there are others facing similar obstacles.

Besides regularly meeting in person with a community of families, the Gonzales family is active in the DFW Trans Kids and Families Facebook group, which provides a forum to organize and share stories.

"It's been a really empowering experience realizing that we wouldn't be friends with a lot of these people if we didn't have this huge common thread," she says.

If other parents, adults, would start having these conversations and stick up for trans kids and adults, and call out discriminatory comments we wouldn't be where we are right now.

At the same time, Gonzales says she believes the relationships have provided benefits for transgender adults, as well. "Because of it, we're all family. There's nothing we wouldn't do for each other at this point," Gonzales explains. "A lot of trans adults don't have their families in their lives anymore, which is just heartbreaking."

For people looking to support the trans community in their everyday lives, Gonzales put an emphasis on having straightforward conversations with children and adults alike. She believes that in order to make the culture change, it's about staying loud and not giving transphobic comments a pass.

"If other parents [and] adults would start having these conversations and stick up for trans kids and adults, and call out discriminatory comments," Gonzales says, these cultural changes could finally come about.

"It doesn't take much to say 'A trans woman is a woman,'" Gonzales continues. "Have those conversations — I think that's really the best way to push forward with teaching our society how to move forward."