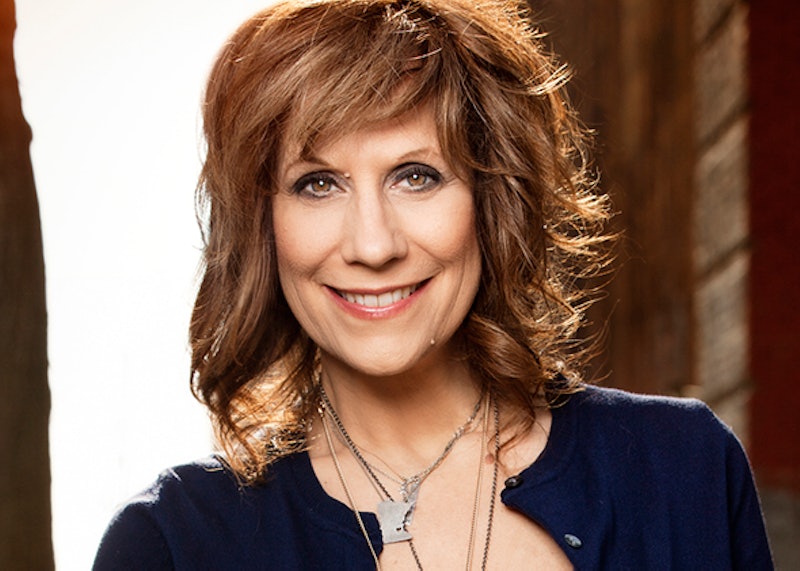 If you're planning a tour around the country to host comedy shows, volunteer at abortion clinics, and get communities involved in the fight for reproductive freedom, there's really no better name you could choose than the Vagical Mystery Tour. While it sounds like it could also be the chapter of a self-help book for pubescent girls, the Vagical Mystery Tour is a series of comedy shows that are making a difference in the fight for women's reproductive rights. The key is not only fighting to make a change on a grand scale, but actually making small, everyday changes that individuals can see and feel the impact of immediately.

The Vagical Mystery Tour is put on by the also wonderfully named Lady Parts Justice, an organization which was founded by comedian and Daily Show co-creator Lizz Winstead. LPJ describes the idea as "the USO meets Habitat for Humanity for abortion clinics." Basically, comedy fans get to have some laughs and then find out more information about volunteering to support reproductive rights in their town. The comics participating in the tour spend their time volunteering at clinics, too, and the whole setup means that the effects are instantaneous.

"What’s been really cool is at the end of every show we have a talk-back with people who are clinic escorts or people who run their abortion fund or someone from their local independent clinic, and then they all explain what their needs are, what they do, what would be really helpful to make their staffs' lives helpful and then people can volunteer," Winstead tells me via phone about halfway through the tour. She's somewhere between Wichita and Omaha when we speak.

Clinic workers talking to potential volunteers directly means that people who didn't even know that their skill set could be useful find out that they can make a difference, too.

"So things like the escort team in Alabama needed a graphic designer and someone from the audience goes, 'I’m a graphic designer and could totally help you. It never occurred to me that I could be useful in that way,'" Winstead explains. As for herself and the group of comedians, they've helped with tasks like yard work in Oklahoma City, fence building in Forth Worth, and planting flowers and escorting patients in Jackson.

Not everything has been so sunshine and roses, though. Some of it has been bullhorns and giant posters of fetuses.

"We have the worst groupies ever," Winstead says of the anti-choice protesters she's encountered outside of the clinics and shows. "But what that did was it showed people the extreme nature of how these people are. And when you’re working at a rock club, people who consider themselves, you know, pro-choice and liberal, and they see what happens outside of their own club. They were so supportive, and they were like, 'You know, we knew these people were creepy, but we had no idea that this is what happens to people.'"

The learning experience has also gone in the other direction with an anti-choice protestor being surprised to see a comedian he's a fan of working hands-on with a pro-choice organization.

"The guy’s like, 'Oh my god, you’re the guy from Who’s Line Is It Anyway. I love that show,'" Winstead says of a protestor encountering comedian Greg Proops, who is participating in the tour. "And then Greg goes, 'I hate what you’re doing.' And [the protestor] just, like, didn’t know what to do." She continues, [The protestors] are just like, oh, you know, I could totally berate a woman by herself and scare her, but when there’s a whole bunch of people staring at you watching you do it, that behavior changed and it was very telling. So get out there, people. Stand with the clinics, because it gets those bullies to shut down."

Winstead believes that using comedy as a force for political and social change "works on so many levels" from making people feel better about dire situations to simply getting them interested. "You can get anywhere from 100 to 150 people gathered in a room much easier if you say, 'Hey, we’re gonna have comedy and music. And we can have a cool conversation afterward with some really amazing people in your community,'" she explains. "You know, that’s much more fun than maybe saying, 'Who wants to get together and learn about something?” Can't argue with the creator of a comedic news program that's been running for 21 years on that one.

The goal of the tour has clearly been working out so far. When it comes to the volunteers who have stepped up at each show, Winstead says, "We’ve gotten anywhere from, the lowest amount of people we got was 20 and the most was 50."

There's still time to get involved or see a show if you want to join the ranks. The tour still has seven stops remaining, including shows in Chicago, Cleveland, Louisville, and more. Just think: Not only do you get to do a good deed for your community, but you get to laugh and say you participated in something called a Vagical Mystery Tour. Win-win-win.