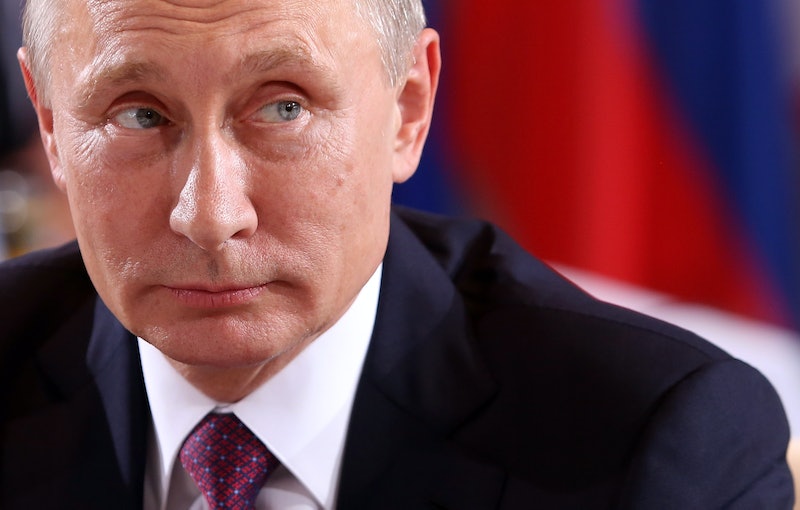 People believe what they want to believe. Maybe it's more charitable to say that people are much more inclined to believe what they want to believe. Psychologists call it confirmation bias, a term that's now entered the general lexicon. This at least partially explains why Trump supporters more easily breezed past his scandals, while opponents were more prone to see a would-be dictator lurking within every nasty comment. Confirmation bias can be exploited through "disinformation campaigns," a propaganda tactic that entails the constant release of false stories meant to obscure facts, or even what constitutes a fact altogether. This is a signature strategy of Russian president Vladimir Putin, and it's making foreign policy increasingly difficult and dangerous to craft and carry out.

Take the recent sarin gas attack in Syria. While Western leaders quickly concluded that Syrian President Bashar al-Assad was responsible, Russia came up with its own counter-narrative. Rather than Assad dropping the chemical bomb on the village of Khan Sheikhoun, Russia argued that rebels had stockpiled their own chemical agents, and a regular bomb had unintentionally hit their storage facility. Russia's version of events is full of inconsistencies and logical impossibilities, but no matter: Even some American politicians are calling the U.S. intelligence assessment into question.

Trump became a perhaps unwitting messenger for disinformation campaigns with his "FAKE NEWS" claims on Twitter. Of course, Hillary Clinton also referenced fake news, pointing out that it had become an "epidemic." In the case of Trump, he often shouted "fake news" whenever a story didn't portray him positively. Negative coverage is not intrinsically "fake," so Trump's use of the term was often cheap manipulation of a genuinely frightful new form of societal influence.

The case of fake news as it relates to Hillary Clinton is very different. To take one example, an online conspiracy accused Clinton and her campaign manager, John Podesta, of running a child sex ring out of a Washington, D.C., pizza shop. Known as #PizzaGate on Twitter and Facebook, the false story led one man to take his gun into Comet Ping Pong, the location of their supposed crime.

As the above example demonstrates, fake news can have real-world consequences. When hired teens in Macedonia are able to influence American opinion by creating fabricated identities online and then trolling nonstop, that inevitably impacts the degree to which our democracy can properly function. It can sway voters, and maybe even whole elections.

If regular voters and politicians can be convinced that U.S. intelligence is not to be trusted — that maybe anyone and/or everyone is lying to them — then there is simply no way to have coherent policy. A deluge of disinformation is particularly harmful to foreign policy, as any intervention or abstention overseas depends upon arguments built on a foundation of agreed-upon facts. Unlike domestic issues, like tax rates or unemployment, which are experienced firsthand, the details of international events have to be taken on faith.

But the whole point of disinformation is to destroy that trust in government and news media. If everyone is a cynic, then any version of events is equally suspect. For instance, if U.S. intelligence agencies conclude Trump's administration was somehow involved with the Russian government, an effective disinformation campaign would simply convince Americans those agencies could not be trusted. Americans who support Trump already would be particularly inclined to believe such "fake news" arguments.

Ergo, combating fake news and other disinformation tactics must become of paramount importance in 2017 and beyond. Otherwise, not only Russia but any interested foreign power will be able to exert tremendous influence over American opinion, turning voters for and against U.S. international actions as it suits their particular goals. And that is a frightful prospect indeed.