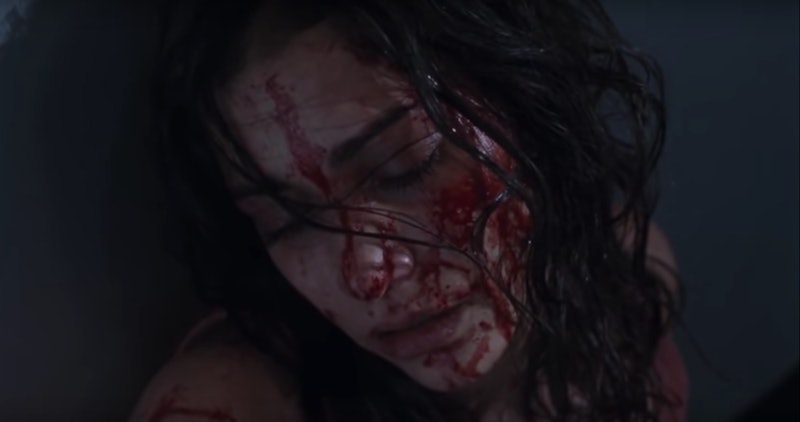 For many victims of trauma, especially childhood trauma and abuse, one of the hardest parts of recovery can be forming and maintaining healthy relationships. In my case, childhood trauma led to a serious distrust of others, a need for and fear of intimacy, and the frustrating symptoms of post-traumatic stress disorder (PTSD). I ended up seeking out other trauma survivors as friends, because we shared the language of pain. Years after those friendships died out, I saw myself in Pascal Laugier’s Martyrs (2008), a film about two deeply traumatized women whose unusual bond enables terrible violence. While I never helped my friends hide any bodies, the relationship between Lucie (Mylène Jampanoï) and Anna (Morjana Alaoui) reflected many of my troubled adolescent friendships. Sometimes we’re so desperate to fix what’s “broken” in ourselves and each other that we can’t see we’re only causing more damage.

A 2009 study published in the journal Depression & Anxiety showed that women are more likely than men to experience depression or anxiety as a result of childhood neglect or emotional abuse. In addition, researchers found that in women, but not men, "perceived friend social support protected against adult depression" — and this was even after they accounted for "the contributions of both emotional abuse and neglect."

In my own experience, I find that the danger may be that some women cling to these friendships even if they become unhealthy, because they have a significant sentimentality toward them. I certainly did.

Many of my young friends were victims of childhood abuse who begged me to teach them how to be brave. I never told them the truth: that my bravery was a front.

While I experienced trauma throughout my adolescence at the hands of some truly terrible boyfriends, my problems began when I was only 7 or 8. A trusted family member begged me to come visit for an extended period over the summer, only to pass me off to any other relative available. Some of these relatives shouldn’t have been allowed near children, let alone be left in charge of them. In addition to basic neglect, I was forced to watch the gruesome coverage of the O.J. Simpson trial daily, I was left in cars while my “guardians” went into bars to get drunk, and I was abandoned on a carnival ride at the state fair. I’ll never forget my terror as I wandered the fair, queasy from the sticky-sweet, sickly sour smells of my surroundings. After what felt like an eternity of searching, I finally discovered my adults doing drugs behind the temporary toilets. They shooed me away, told me to go find another ride. After a mostly loving childhood, I felt unwanted and unloved for the first time.

Like many other victims of neglect or abuse, I thought that it was my fault. I didn’t tell anyone what happened until well into adulthood because I was ashamed. They must have abandoned me for a reason, I thought. I was a pest. So to hide this newfound self-loathing, I grew more boisterous. I was vocal about how “tough” I was, and I started getting into fights at school. Although I thought that I was proving myself to my peers, I was really trying to prove my strength to myself.

All this posturing caused other trauma survivors to seek me out. Many of my young friends were victims of childhood abuse who begged me to teach them how to be brave. I never told them the truth: that my bravery was a front. It was only when I reached high school and met one very special friend that I was able to share my pain. I'll call her "Emma."

Emma made my trauma seem silly by comparison. She had endured childhood abuse in every awful flavor, and she lost her mother to an accidental overdose at a young age. We bonded over a mutual love for art and soon became inseparable. We shared everything. We had secret codes and would burn or eat our notes to each other so no one else could possibly read them. The two of us had our own private world where we felt understood, at least by each other. Our desire to be as close as possible led us down some dark paths. We both began self-harming around the same time. We felt bonded by this as well, and even began cutting ourselves together.

Life separated us several times. First, my mother banned Emma from the house. Then, Emma was put into foster care. We both moved on to other toxic friendships and even more toxic romantic entanglements. It wasn’t until I watched Martyrs that I was able to really delve back into my own experiences. In Martyrs, Lucie is captured and tortured by strangers when she's a young girl. She escapes and befriends Anna in a foster home. Years later, Lucie decides to get vengeance on the people who hurt her, and she calls upon Anna for help.

The relationship between Anna and Lucie mirrored the one between myself and Emma. Like Anna's, my trauma was on a different scale than my friend’s, but I did everything in my power to help her. I could empathize with Anna’s decision to help Lucie clean up after a murder, because I had helped clean up Emma’s blood after suicide attempts. I understood the need to save someone you love from themselves, no matter the cost.

The bond between Lucie and Anna in Martyrs is dangerously intense. They both suffer the lasting effects of childhood trauma that make “normal” relationships more difficult. Anna has some problems regulating her emotions, fluctuating between apathy and an abundance of empathy. She also suffers from a great deal of guilt, and her tie to Lucie is a way for her to ease that guilt. Lucie’s love eases her self-loathing, and her dedication to her friend helps her feel less isolated in her guilt.

Lucie’s PTSD symptoms are more severe. Her pain manifests itself in hallucinations and a drive to get revenge. The first half of the film focuses on Lucie’s vengeance upon those who hurt her in childhood, along with Anna’s attempts to help her increasingly agitated friend. The second half of the film follows Anna as she is captured by the same cult who captured Lucie more than a decade before. The leader of the cult (Catherine Bégin) describes how Lucie crumbled when she was tortured and why Anna will not, because of her devotion:

Lucie was only a victim. Like all the others. It's so easy to create a victim, young lady, so easy. You lock someone in a dark room. They begin to suffer. You feed that suffering. Methodically, systematically and coldly. And make it last. Your subject goes through a number of states. After a while, their trauma, that small, easily opened crack, makes them see things that don't exist.

Anna, she says, will be a martyr. The film has come under some criticism for its loose definition of the term, but Anna’s steadfast love for Lucie means she is a martyr in every sense of the word. She is not just a “witness,” which the film posits, but she has met her fate through faith in her friendship with Lucie. Like the ladies of Thelma and Louise, Thoroughbreds, Baise-Moi, Tragedy Girls, and numerous other films, Anna and Lucie’s bond is one of destruction. Instead of working through their pain in healthy ways, they confirm each other's biases and further distance themselves from reality.

Unable to heal my own pain, I found comfort in trying to help others heal. Sometimes I helped. Sometimes I enabled people and made things worse.

There is power in female friendships, especially between women who have had to piece themselves together after trauma. There is a lesson in Martyrs, a warning to maintain our sense of personal identity in these all-consuming friendships. Survivors of trauma are susceptible to revictimization. Some may seek out situations or people who might give them a chance at redemption, while often putting themselves at risk of being traumatized again. Like Anna’s need to help Lucie, I felt compelled to help Emma. I felt compelled to help every person I met who had been hurt. Unable to heal my own pain, I found comfort in trying to help others heal. Sometimes I helped. Sometimes I enabled people and made things worse. It took years of trial and error before I realized that I had to help myself first.

Both my therapist and my mother often remind me that “you have to put on your oxygen mask before you can assist others.” In order to truly help the people I love, I have to try to make myself as whole as possible first. Otherwise I’m prone to get stuck in the same cycles, feeding pain back and forth on an endless loop. I’m glad to say that Emma eventually learned this, too, and we’re both happier and healthier for it. Our friendship these days is not the desperate, clinging thing it once was. Unlike Lucie and Anna, we avoided our fate. We learned to be neither victims, nor martyrs.

More like this
These 25 International Horror Movies On Netflix Prove Fear Is A Universal Language
By Bustle Editors
26 Ghost Story Podcasts To Get You Ready For Halloween
By Jessica Booth, Mia Mercado, JR Thorpe and Emma Carey
Sarah Jessica Parker “Doesn't Remember” What 'Hocus Pocus' Is About In Resurfaced Clip
By Emily Mae Czachor and Radhika Menon
At 14, Jurnee Smollett Was Taking Meetings With Missy Elliot & Lauryn Hill
By Chloe Foussianes
Get Even More From Bustle — Sign Up For The Newsletter