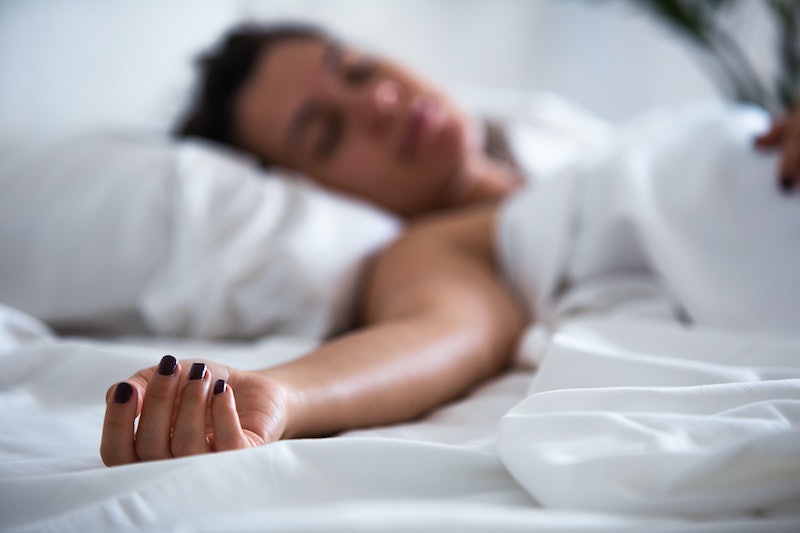 When celebrities broadcast their flaws and quirks, they humanize themselves. Like when Gwyneth Paltrow discussed living apart from her husband and dropped the Hollywood scrim that depicted a traditional marital home. Or most recently when Carson Daly admitted he and his wife sleep separately, freeing the subject of sleep divorce from list of taboos couples are afraid to talk about. Though sleep divorce is a phrase that's had a lot of traction online in the last few years, there aren't a lot of couples that have been willing to share their personal stories of sleeping separately, so Bustle reached out to couples who sleep apart to find out how it affects their relationship.

Though many individuals wrote in to share their story, most asked to remain anonymous both to keep their arrangement a secret from their friends and family, and also to keep their honest opinion of the subject a secret from their partner, proving the stigma of sleeping apart as being indicative of marital issues still has a long way to go. While a study (based on a survey of 1,016 people) from the mattress company Leesa showed that the majority of couples prefer to sleep in the same bed (around 62%), additional data shows that the amount of couples who admit to sleeping better alone is close behind, with a third of couples privately admitting that they're uncomfortable sharing their opinion with their partner. And though medical studies might have evidence that both co-sleeping and solo sleeping can be beneficial, all experts seem to agree that the best arrangement is the one that works for both people in it. Here's what individuals were willing to share about their sleep arrangements with Bustle:

"I realized a few years ago that I sleep so much better without my husband in the bed, so we sleep in separate rooms. Intimacy works out better for me this way. I feel like I get my space so I'm not harboring negative feelings toward him. Therefore I don't feel pressured constantly. I believe this arrangement makes our relationship healthier."

"My partner liked to sleep alone, but it didn't work for me. I felt abandoned when he'd leave the room. Eventually the relationship ended because in a larger sense we didn't want the same thing — looking back, that was an example of it."

"[Sleeping separately] wasn't ever anything I wanted or needed, but I was willing to try it because my partner wasn't getting enough sleep sharing a bed with me and our dog. For a while it was fine, we'd spend time together before bed and then I'd go to the other room and we'd get a good night sleep. Over time though, a space grew. We weren't having less sex, we were't cuddling less either. But it turned out to be the first of many things we'd realize we could do without each other, but shouldn't necessarily."

"If we had a second bedroom, my long-term girlfriend and I would sleep separately. When there's another bed in a hotel room we're staying in, we split up immediately. Though to be honest, a part of me is glad that we don't have the option to do this at home, because it's nice to be stuck together."

"My boyfriend snores, which makes sleeping together very difficult so I spend most nights on the couch. Sleeping apart is a small matter in the overall scheme of things when it comes our relationship. The connection we have is powerful, so [bed sharing] is something I'm willing to sacrifice. If our energy wasn't so well aligned in all other areas of our partnership, we might be missing the intimacy that sleeping in the same bed can create, but we foster that bond in other ways."

"My wife and I started sleeping in separate beds for practical reasons when she was pregnant and it worked so well for us, we never went back to sharing a bed. With kids, our bedtime is not the best time for sex anyway, we find intimacy during the day here and there, during the kid's nap times, our morning showers, etc... We're both better people when we get a good night's sleep, and never being able to blame each other for a crappy night's sleep is one less fight to have for us. My wife has said that it makes her sad sometimes not to have those late night or early morning moments together, but it's not enough of an issue yet, sleep is still more important to her. Who knows what our arrangement will be in the future, I can see her proposing a single bed again."

"My boyfriend and I share a bed because we don't have the luxury of separate beds, but I look forward to the nights where I am alone in a hotel bed for work trips. For us, the structure of a shared bed at night is part of the glue that keeps us together, so at this point in our relationship, I wouldn't want to risk sleeping separately unless circumstances (like my work trips) require it. Making the choice to sleep separately would feel like a choice to create space and our relationship would have to be much stronger for me to feel comfortable with that."

"My partner and I have only slept apart on nights that we were fighting, so it's hard for me to think about sleeping in separate rooms without associating it with turmoil. The problem is that my partner snores and suffers from insomnia, so while they might sleep better with me in the bed, I'm never been able to sleep more than a few hours without being woken up. I'd really like to bring up sleeping separately, but it feels too negative, too much like a punishment."

The combination of data pertaining to sleep health and feedback from couples who have found success in sleeping separately has helped to reduce the amount of shame around the subject, but there's still a long way to go. For couples who can't get past the stigma, it's important to remember that in order to be a good partner, you have to be healthy. So if you're losing sleep over a bed share that doesn't work for you, you're depriving yourself from the restfulness that you deserve and that might contribute to a healthier relationship. Alternatively, if you're unhappy in the other room, it's important to talk to your partner about finding a solution that's equally beneficial. Being in the same bed is not indicative of a healthy relationship, but being on the same page is.

More like this
The 19 Best Tweets & Memes About Bisexual Awareness Week
By Lexi Inks
Are Quality Time & Gift-Receiving Love Languages Compatible?
By Lexi Inks
These 4 Signs Are The Seductive Sirens Of The Zodiac
By Brittany Beringer
18 Personality Traits Of A Cheater, According To Experts
By Carina Wolff and Lexi Inks
Get Even More From Bustle — Sign Up For The Newsletter